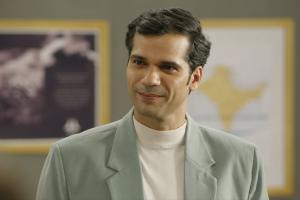 
Popular actor Neil Bhoopalam has had a rather interesting journey so far! He is known for his phenomenal work in movies like No One Killed Jessica, NH10 and the TV series – 24. Not only that, he has also worked as a video jockey and experimented with theatre.

But as he deepens his roots in the OTT space, he will be seen making his negative role debut in MX Original Series 'Kiska Hoga Thinkistan Season 2'. Donning the grey shade of a new boss at MTMC Advertising Agency, he will be seen stirring up the lives of the employees with his dirty politics.
Talking about his character, Neil Bhoopalam says "Formats don't hold me back – be it film, theatre, TV or OTT. The digital space has moved us into the golden age of show business. And as far as playing a negative role, what can I say... It's good to be bad!

Continuing from season one, where we got a sneak peek into the world of advertising, this time the world of MTMC Ad Agency will depict the fast-paced lives and harsh realities of the advertising-world. Directed by the veteran ad filmmaker N. Padmakumar, this season touches various emotions such as interpersonal rivalry, friendship, love, betrayal and extra-marital affairs in the office space.
The series stars Naveen Kasturia, Shravan Reddy, Mandira Bedi, Vasuki Sunkavelli, Satyadeep Mishra amongst others.

Also read: 'Kiska Hoga Thinkistan is based on the rise of the advertising world in the '90s'