Ameesha Patel and Prateik Babbar to start shooting in UAE 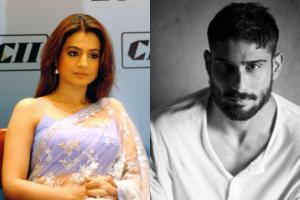 Last month, Gaurang Doshi had revealed his debut into the world of digital entertainment with the launch of two web series, 7th Sense and Line of Fire. The big budget web series will be filmed in the UAE. "With stars like Ameesha Patel and Prateik Babbar joining the crew of 7th Sense, I can only say that the action will get more exciting. I have always believed in creating larger-than-life canvases and with the biggest star cast ever featured in any web series so far, we are here to create a magnum-opus.

"We are in the final stages of the visa and permission process and plan to start the filming for 7th Sense, the first web series in August. Moreover, around 15 crew members consisting of technical team and directors arrive in UAE on the morning of 1st August. Shooting for Season 1 and 2 will be completed in about 140 days, with most of the action happening in Dubai and Abu Dhabi," added Doshi.

"I love the people, the culture, the food, the glamorous and larger-than-life locations which are going to make the web series even more thrilling. It certainly feels great to start working after being in lockdown for four months, she added.

On collaborating with Gaurang Doshi, Ameesha said: "Gaurang and I have wanted to associate together on films in the past but somehow that didnt happen. Now that I have got this opportunity, I am glad to be making my web series debut with a good friend and an even better producer. Gaurang always mounts his Bollywood film on a huge canvas and I am sure this time too he will not leave any stone unturned and will do his best to make his mark in digital entertainment too."

Speaking excitedly about getting back to shooting, Prateik Babbar said, "I feel blessed to be shooting again and salute Gaurang for making this project happen. The audience should expect the unexpected, a wild roller-coaster ride and my character will make the ride wilder, so buckle up".

"The moment I knew that this project is being produced by Gaurang Sir, I mean I already knew its a brilliant script because he is that one producer who is extremely choosy and he has that brilliant eye for what is great. I feel so blessed and grateful that Sir is putting his belief in me, for letting me be a part of this show."

"That really means a lot to me and I will do my best to make him proud and hopefully, we will work on many more projects together," added Elli AvrRam, who is well known for the Bollywood movie Micky Virus and her participation in the realty TV show, Big Boss.

7th Sense is a crime thriller/murder mystery that promises to keep viewers on the edge of their seats with its gripping plot and well executed screenplay. The prep work for Line of Fire, the espionage fast-paced action thriller, will also begin simultaneously with that of 7th Sense.

Madhu Bhandari, Amey D. Nargolkar and Munir Awan are the associate producers for both the web series, while Parag Parekh and Ronak are the financial advisors.