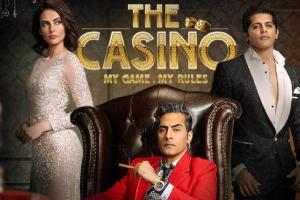 ZEE5, the largest video streaming platform in the country, has consistently launched content across languages and genres. ZEE5 announced the trailer of the most awaited show 'The Casino' is finally out! It stars Karanvir Bohra, Sudhanshu Pandey, Mandana Karimi, Aindrita Ray, Dhanveer Singh in pivotal roles.

The trailer vividly highlights the glamorous life of casino and then transitions through into the revengeful look of Karanvir Bohra who is seen essaying the role of the reluctant heir. Mandana Karimi, the queen who has been ruling the heart of the King and by hook or crook, wants to be the winner and has her eyes only on the jackpot.

The show is a rollercoaster package of revenge, lust, and drama. In this gamble of being the righteous owner of #TheCasino, the queen, the king and the heir will wager into a frivolous feud which will decide the fate of the crown. The games have just begun!

"I am super thrilled that the fans are finally getting a glimpse into the life of The Casino. The show is as glamorous as the cast, and the narrative will revolve around the reluctant heir who will find his way to the throne. The Casino is an edge of your seat thriller and the stakes will get higher every episode. I hope the viewers tune in to ZEE5 and watch The Casino on 12th June" shares Karanvir Bohra.

"This is one of the most exciting ventures that I have been a part of where I have evolved as an actor. My character will set the rules of this gamble, since I am the queen I am here not only to play but to game. I am the soul of the Casino. I am beyond electrified for the show to release on 12th June on ZEE5 and cannot wait for the fans to watch the show.'' expresses Mandana Karimi.

"I am super thrilled for my character in the show and I am sporting a salt and pepper look for it too which will be new and interesting for my fans. I hope the viewers enjoy the trailer which is a glimpse into the glamorous world of The Casino. With ZEE5 giving it the reach it deserves, there is a lot of excitement from the fans about the show already. I am super thrilled for the show to premiere on 12th June.'' Sudhanshu Pandey.

This ten-episode series will definitely grip your attention and give you a virtual walk through the world of glamour and glitz with a tinge of mystery and conspiracy. 'The Casino' is directed by Hardik Gajjar and produced by Hardik Gajjar films. The series is all set to premiere on 12th June exclusively on ZEE5.

Next Story : Penny Dreadful, The Witcher: 5 web shows for fans of the supernatural