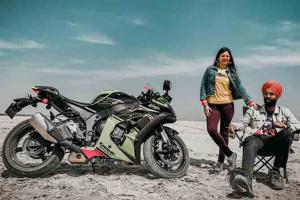 
Building a successful image presents a multitude of challenges, especially in a market that has been saturated by phenomenal celebrity influencers. Conquering one's own fears and building a successful career is something that we all want to achieve. The song Manzil, by the popular wanderlust YouTuber in India hailing from the region of Delhi, Jatt Prabhjot, is an inspirational journey to work hard and fulfil the goals we dare to dream. Every line of the song resonates a journey of strength, from oblivion to 1.22 million subscribers on YouTube.

The lyrics narrate the story of this man who overcame the hardships of life, the pain and agony he felt when his parents were trying to meet a day's end and the turmoil he felt to survive in a single room with five other members. While others laughed and made their way through life, he believed in himself and his destination. This new found zeal to conquer the world one step at a time, made The Jatt Prabhjot, a stronger individual. During writing this song Manzil, he said he felt super anxious to make his first ever song release, as it was a song all about his personal life, although while writing the song he never restricted himself.

He penned down whatever he has been through and how he managed to come out with the flying colours of success. In his own words, "Vaise to MANZIL hai bhot dur par kahi log hume ginte Sitaro mai", a beautiful line from the song Manzil itself, which loosely translates to, "Though the destination is quite far away, still there are people who count me with the stars". He hopes for everyone to relate with his journey of overcoming difficulties and becoming a winner, only then he can be rest assured that the song MANZIL has actually shown people the light at the end of the tunnel.

Jatt Prabhjot is one of the most popular wanderlust YouTuber in India hailing from the region of Delhi. Travelling is his greatest energy and his love for motorbikes is profound, which according to him is all about a journey which explores the mind of an individual. He's a software engineer by profession and continued his passion for motorbikes by creating his own YouTube channel where he uploads his daily vlogs and now has 1.22 million subscribers. Now, he's coming up with his new song MANZIL: the story related to his real-life journey.

Next Story : Abhinav is all set to probe the world of computer science at Stanford