Ayman Assi - From Crumbling in Debt To Thriving In Concierge Industry

The 43-year-old entrepreneur didn't fall victim to dread and despair, rather, he backed himself up with courage, hope, and determination and resumed hustling for success 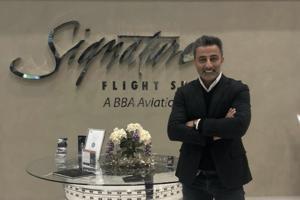 
In the quest to achieve success, we often find ourselves stuck at one place. Our hardest attempts to strive for better doesn't seem to reap any fortunate results. It is times like these, that we must remember: moving forward is the only way and our seemingly unfruitful attempts will eventually bring success. Founder and CEO Amerald UK, Ayman Assi upholded this principle and refused to falter during his tumultuous journey as an entrepreneur, and now, the perseverant is harvesting the ripened fruits of success.

Ayman, born and raised in Lebanon, moved to London at the age of 20. To sustain his living, he started working as a Kitchen Porter immediately after moving. Due to persistent hard work and dedication he was promoted to preferable positions and soon, even better opportunities awaited him.

However, Ayman was passionate about entrepreneurship. He decided to quit his job and partnered with his colleagues to start a business that would deliver dairy products like strained yogurt and cheese to the masses. The business flourished but Ayman yearned to have a business of his own, and so, he left the dairy business to pursue his dream.

All journeys have ebbs and flows and Ayman’s took a steep jump downwards when his venture failed to bloom. Ayman had opened a restaurant, introducing Middle Eastern flavours in the city of London, however, it wasn't as successful as he had imagined. Instead, the business crashed and soon, Ayman was crumbling in debt of 400,000 British Pounds.

The 43-year-old entrepreneur didn't fall victim to dread and despair, rather, he backed himself up with courage, hope, and determination and resumed hustling for success. He served as a Valet at a Valet Parking Service for a little while before launching his own Car Rental Company. The Car Rental Company fortified his confidence in himself and he proceeded with his entrepreneurial journey by opening a luxury concierge company called Amerald UK.

Amerald UK, now operating globally such as in France, Italy, Netherlands, Spain, UK, and Switzerland, hoisted Ayman to the skies of success. At Amerald UK, Ayman makes sure to provide state of the art services to his clients and hence has become a household name for the elite class to recommend for concierge services. Whether it is the airplane to hotel escort or exotic Europe tours, Amerald UK is synonymous with opulent and deluxe services of all kinds.

While the success of Amerald UK was a milestone for Ayman, his hustle to achieve more led him to build a restaurant in London. This time around, Londoners loved the Mediterrenean cuisine he had to offer. His restaurant, Beit El Zaytoun, located in West London pays tribute to the Middle Eastern culture and heritage. His other endeavours include an events organising company called A Events. They invite Middle Eastern singers and performers to grace the stages of London.

The grit and resolve Ayman has displayed is commendable and we should all look up to him as an inspiration to find the silver linings even when the gray clouds have covered the sky from everywhere.

Next Story : A Fairytale in a Pandemic