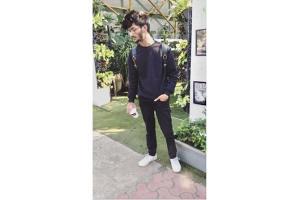 Sharan Patil, better known as OKSHRAVAN on social media, uses latest digital marketing tricks to keep his client’s content ahead of all. Okshravan, not only runs a digital marketing firm called ‘TAGDOG MEDIA’, but also is a Bollywood director who has directed some of the most viral videos for the labels such as Zee Music, Times Music, etc. Along with this, Sharan Patil is also a YouTuber, blogger, social media advisor, and a brand communication head.

Sharan Patil has more than 25 thousand followers on Instagram and has a network of more than 50 million users base on combined social media including, Facebook, Instagram, YouTube, Twitter and TikTok. Born in Alibaug in 1997, Sharan always dreamt of getting into the fields of technology. In keeping with his career choice, he began to write blogs from a very early age. However, his first blog hitting 5k views in a span of a week, kept him going.

However, with immense knowledge in the field of digital marketing, in no time, Okshravan has become one of the well-known names in Bollywood, with many big stars wanting to work with his firm. The company TagDog Media was formed in 2015 and by Okshravan and Akshay Giri is known as Giri G, since then Sharan has been leading in almost every aspect of the industry. All thanks to his Tech and Marketing skills. Shravan has proved his expertise by churning out viral music videos on social media. No wonder his number of followers keeps increasing with each passing day.

Actor and Singer Adhyayan Suman, with more than 1 lakh followers on Instagram says, “Shravan is not just someone who runs a digital marketing firm, but he is in the business where he makes his client’s stand ahead of everyone.”

Speaking about his interests, Sharan says, “I was interested in social media from a very young age. In recent years, I noticed that it is proving to be the best way to follow aspirations of millions of people, hence, I also decided to try my hands, and slowly it started to work in my favour.”

However, he is not satisfied yet! Sharan plans to increase his base in different cities too and has also planned to come online frequently and guide young students who are willing to make their career in Digital Marketing in the coming time.

Next Story : Said Ahmad on social media success, and travelling across the globe