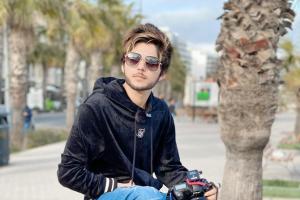 
To make others smile is not everyone's cup of tea. Fewer people have that talent to make it happen. All social platforms are different for various talents but, one such platform is preferred these days which offers combination of all sorts of talent stage and the name which comes to the mind is Tik Tok.

Nadeem Mubarak is one such celebrated persona and holds the rank 3 in the list of top tik tokers of Pakistan. He is commonly known as "Nani wala". Nadeem is a pakistani citizen from city Lahore where he did his schooling from Mesali public school and then went for his higher studies to London. Realising his talents in no time soon in acting and comedy he drove himself in the direction of entertaiment industry. Nadeem is one of the finest Tik Toker of the present time. He is ranked third among all the tik tokers in Pakistan. He began making tik tok videos in his starting career and initiated this task with his Grand mother (naani) and sooner people started liking his naani and thus, this became his identity and people started recognising him as "Naani wala". And with the support of her, and his talents, hardwork payed off well as a result of which his name is included in top 3 tik tokers of Pakistan.

His applaudible influence on all of his social media platforms which is clearly visible by looking at his phenomenal number of followers from all round the globe and at present he has 2.1 Million fans on Tik Tok and 62 million likes. On Instagram he has 95k plus followers and facebook page has 64k plus fan following. Such immense following shows that he has great influence not only in pakistani people but all around the globe and thus making him great Tik toker number 3 of the nation. His influence on people is remarable and is increasing day by day.