Pooja was recently got invited to a literary fest in the hills of Kasauli one September evening wherein she was interviewed by noted film actor, astronaut and a fighter pilot - Yuri Suri 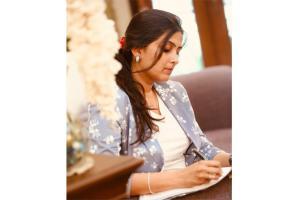 Now Pooja is prepping for another literary event, the Valley of Words Literature Festival held in Dehradun


They say that one lifetime is all you got! They say that there are only so many trips around the sun you will make! They also say.. follow your heart and do what makes your soul happy.

For Pooja, writing has always been a passion but she never really ventured outside of her notepad. Her written thoughts and moments were always fiercely guarded in a closed drawer until the Mac came about.

Out of the blue, she got a call one afternoon from a gentleman who had read her blogs and loved her flair for words. He was .. ahem! Rather developed in age and as a last attempt before staring down at the earth from the skies above, he wanted to find his college sweetheart. She anonymously wrote his love story, by taking references from original letters exchanged between him and his lady friend in the '50s.
"It's my last try to find her. I am 86 and don't have an eternity," those were the exact words Pooja recalls, the man telling her.

This story gained her blog rampant popularity leading to a rapid readership on her blog, Random Conversations. "Relationships are as simple or complex as you make them out to be and given the topic of discussion, Random Conversations grew slowly and steadily," says Pooja with an ear to ear smile.

When asked about, how did her debut book, Pursuit-drawn by destiny come along?
She said, "Being a hyper possessive mom got me to pen down chapter after chapter, as I waited for my kids to finish their co-curricular and I didn't even realise when I reached 50K words! This went on to be my debut novel titled, Pursuit – Drawn by Destiny. A story about following your dreams and on belief. Destiny does bend if you have it in you to pursue her!"

She further added sharing her Pursuit journey that, being a debut author has its challenges but she's enjoying the slow yet steady pace her book is taking her on. She recently got invited to a literary fest in the hills of Kasauli one September evening wherein she was interviewed by noted film actor, astronaut and a fighter pilot – Yuri Suri.
Speaking about the experience, an elated Pooja exclaims, "Sharing a platform with noted dignitaries gave me a sense of euphoria and seeing the response my book got, put me on Cloud 9! Life was about to take a rather sharp turn I had mused that evening as I laid back in bed."

Soon after, she got an invitation to be a part of one of the most celebrated literary festival, Khushwant Singh Literary Festival. Sharing her reaction to the same, she said, "I almost jumped out of my skin.. This was a real honour to be amidst a larger gathering and speak of my passion. The pursuit was going to go places! I just knew it was."

Now Pooja is prepping for another literary event, the Valley of Words Literature Festival held in Dehradun. The book is also nominated in the English Fiction category. Pooja is grateful for the acclaim and positivity that Pursuit Drawn by Destiny is receiving, both online as well as offline.

The second part of the book focusses on the journey between the two main protagonists. It shares their dreams and fears and showcases the one fact that – In spite of all the odds faced in life if you have the one you love by your side, you have it all. Relationships today are often fragmented due to various reasons and through my work, I hope to instill in the people who read that… Everything is possible, if only you have the courage to pursue them.

Next Story : Carrying an influential persona that leads him to capture his stories