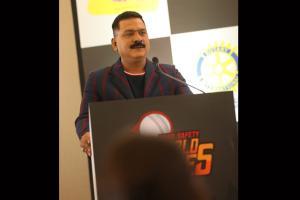 
Ravi Gaikwad's father completed his Civil Engineering (BE Civil) from government College of Engineering,Karad and his mother has completed BA (Political Science Hons) from Pune University.

Ravi Gaikwad began writing poems since his school days !He is a prolific writer with profound thinking on spirituality.He was a General Secretary of Science and Technology Club and also a NCC Cadet during his school days!

Ravi Gaikwad has a remarkable feat achieved of having scored 100/100 in two subjects of his final year of Engineering.

Ravi Gaikwad's wife Dr Nirmala is a doctor by profession. Ravi Gaikwad younger sister Dr Pratibha is a Doctor in United Kingdom and his younger brother Pradeep is an Engineer.

Ravi Gaikwad has presented several papers to IIT and in the field of science and technology. Ravi Gaikwad has been doing lot of philanthropic work in India, and has played a pioneering role in changing traditional ideas of charity.

His work is multi-faceted in nature and promotes social welfare, while placing considerable importance on national development.

This story has been sourced from a third partysyndicated feed, agencies. Mid-day accepts no responsibility or liability forits dependability, trustworthiness, reliability and data of the text. Mid-daymanagement/mid-day.com reserves the sole right to alter, delete or remove(without notice) the content in its absolute discretion for any reasonwhatsoever