Rise of the K Shaped Economy and its links with Astrology

Astro Vastu Consultant, Mr. Ashish Mehta predicted a difficult economic situation around the same time. A treatise on Astrology mentions how a major shift in the economy takes place during the conjunction of Jupiter and Saturn 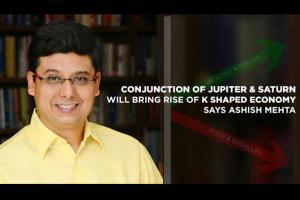 
The Coronavirus pandemic has taken over the world unexpectedly and has deeply affected the economy across countries. For many, the entire scenario came as a shock, but a wide research by a renowned Astro Vastu Consultant, Mr. Ashish Mehta, predicted a difficult economic situation around the same time. A treatise on Astrology mentions how a major shift in the economy takes place during the conjunction of Jupiter and Saturn.

"Jupiter is responsible for happiness and Saturn is responsible for sorrow. When the two planets conjure, it results in a huge transformation in the world. The most recent conjunction occurred on March 30, 2020 when the two planets conjured in Capricorn and the conjunction ended on June 30, 2020", says Mr. Mehta. This was the time period of complete lockdown in most countries. "A similar conjunction will be taking place from November 20, 2020 to April 6, 2021 and will occur again in September 15, 2021 to November 21, 2021. When both the planets conjure at the exact level of degree, the phenomena is called 'The Great Conjunction', which will occur on December 21, 2020."

The profound research of Ashish Mehta, who has also authored textbooks on Astrology & Vastu Shastra, clearly states how the conjunction affected the economy around the globe. "This adds up as the conjunction of Jupiter and Saturn occur in Capricorn which is the zodiac of element of earth and the economy." adds Mr. Mehta. He continues, "Jupiter and Saturn emit opposite energies and their conjunction in Capricorn results in a K shaped economy." A K shaped recovery occurs when an economy restores unevenly and there is a separate trajectory for two segments of the society.

American Economist Peter Atwater, the first to mention K shaped Economy said how that period will result in doubling the growth of the wealthy and worsening the condition of the poor. Mr. Ashish Mehta who is also consulted by esteemed organisations and businessmen around the world for guidance in Astrology, Vastu Shastra, and the Vedic Sciences, says, "During the conjunction of the two mentioned planets, qualities of Jupiter like Knowledge, Skill, Talent will be in demand which means that the educated and skilled will prosper and the uneducated & unskilled will face several hardships. If one wants to survive in a K shaped economy, one will have to enhance their skills, educate themselves, and continue to grow or else they will face a major downfall."

A research paper published by the International Monetary Fund based on the gathered data of the past 100 years, stated that after the pandemic the gap between the rich and the poor will continue to widen. The K shaped economy is clearly seen in the US stock market as well as the Indian where the leading companies see a huge rise in their stocks while others see a decline.

Mr. Mehta explains, "The conjunction of Jupiter and Saturn occurs on the same zodiac sign after every 60 years. The last time the conjunction occurred was in 1961, when the world witnesses great economic changes – The Bretton Woods Agreement – which was about paring the USD with gold reserves. 10 years after the same, the agreement was cancelled by the then US President Richard Nixon.

The same conjunction is happening in the current year of 2020. Hence, Mr. Ashish Mehta professes that in the next 5-10 years the world will see the rise of a digital currency or an existing digital currency will gain traction. "The digital currency's parity will be linked with the gold reserves, and hence the rich and wise are busy investing in gold and gold mines," adds Mr. Mehta