Sabarna Roy: I am a crusader for the cause of Existentialism

Sabarna is presently working on his sixth book: a storybook with ideas as its characters to understand the certainty of uncertainty in human life. This is likely to be published in the winters of 2021. 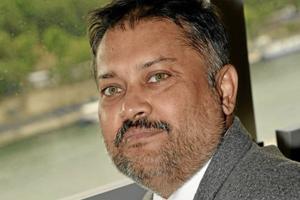 
In the realm of English literature of India, we have poets, short story writers, play writers and novelists galore but combination of all of them in a single fertile brain is extremely rare.

Do we have any? Yes! The readers find them all in Sabarna Roy who, making his vibrant entry with Pentacles in the world of words, went on to create a personal tryst with readers with other works that followed.

Sabarna, a senior engineering professional, marvelled the readers with a unique creativity that marks the beginning of a new wave in Indian literature as a whole: blending poems with fictional creations in a single novel.

No other Indian writer shows this particular trait in their literary adventures. This, of course, offers him a special pedestal in literary circles. Sabarna is versatile in the sense that he also published complex technical articles in peer-reviewed National and International Journals.

And he is a poet and author of five bestsellers too. In the annals of English literature, Sabarna would always occupy the enviable status of a poet-storyteller who dwelt on social realism. Very often, we find he is crusading for existentialism through his creations.

Let us have a wide-angle of the process of thought of Sabarna on the social realism that he tried to delve through its manifold layers in Pentacles, Frosted Glass, Winter Poems, Random Subterranean Mosaic and Abyss. Their storylines may be different but the matrix of narrative, ultimately, is realities of post-modern dark and urban human life. The hollowness and emptiness of our lives are oozing from his narratives like layered smoke.

It is time to have a glimpse at the contents of these five creations of Sabarna who started writing in his university days but stopped it after getting a job. But can anyone extinguish the fire of creativity once it is kindled in a human body? No. Never!

And it happened with Sabarna too. After a gap of about 19 years, he again took up a pen and stormed his brain to create one after another book. What is most remarkable, he explained the human psyche acting on human impulses in its real form through these five books in lucid and uncluttered narrations.

We now will take up Pentacles in the first place not because it is his first book but also to explain why it had a magical impact upon the readers true to the mystic meaning of the title of the book.

Should we not try to unravel the uniqueness of Pentacles that contains a novella and four long narrative poems replete with metaphysical metaphors and dreams playing at its core?

Pentacles is intellectually stimulating and it charts the beginning of a wave in Indian literature that had so far been absent in it. In the book's long story New Life, we find the most vivid description of psychological conflicts that its protagonist undergoes within as his mother had deserted him.

Frosted Glass, a story cycle of 14 long-short stories set in Calcutta and a poem cycle of 21 narrative poems with The City of Joy featuring in some of them, has Rahul as the protagonist. The story revolves around a "Modern Man" Rahul and all other characters associated with him who make, mar and shape his life. The story cycle and the poem cycle are replete with an array of enduring and intricate characters plucked from the crucible of urban life.

On making a critical appraisal of Abyss, a full-length play in two acts with an interval in between, what attracts us most is the element of suspense, the feeling of what next (?). The conflict of personalities depicted in the most penchant way by Sabarna. Abyss at its core is a discussion on complex issues: land for agriculture versus land for industry; the ethics of a working author; the nexus state-craft employs in discharging controversial people's issues.

Without the grip of human nature, nobody could have written this piece. In this situational thriller, the role played by Renuka – the sleuth – is particularly noteworthy.

Sabarna's poetic genius plus profound knowledge of human psyche – underground and deeply guarded –found their best expression in Winter Poems. Winter Poems should be an integral part of the leisure reading of any lover of melancholy and darkness.

The colours, shades and hues that the city of Calcutta assume in the mild season that follows the festivities of Durga Puja and Kali Puja found their wonderful depictions in Winter Poems.

Let us turn over the pages of Random Subterranean Mosaic. It is akaleidoscope of random, yet mysteriously structured to a pattern, fiction, semi-autobiographical and biographical pieces. The book covers poems, short-shorts, opinions, observations, and conversations. Accommodating such a wide variety of genres is possible only by a master storyteller like Sabarna.

Sabarna is presently working on his sixth book: a storybook with ideas as its characters to understand the certainty of uncertainty in human life. This is likely to be published in the winters of 2021.