Have you seen The Legend of Ram by Ishaan Yadav and Neha Dhanuka?

Theatre plays, where you witness a live performance of actors, are a gem of the Indian art form that demands unique creativity and performances. The Legend of Ram is one such gem by Ishaan Yadav and Neha Dhanuka. 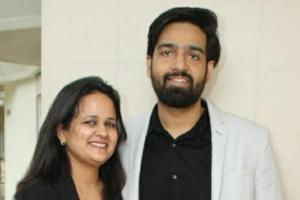 The Legend of Ram, a broadway-style Hindi theatre play, is a timeless story of Ram-Sita- Raavan. It is a different thought on Ram's life, Raavan's fear, Kaikayi's view, etc., altogether a different take on Ramayana. This grand play is conceptualized by Writer and Director Mr. Atul Satya Koushik.

This play has brought back first Ram we saw in reel life in Ramayana. Yes, Mr. Arun Govil is back, and this time on stage. Nivedita Bhattacharya very gracefully plays the role of Sita. This extravaganza production of Ishaan Yadav and Neha Dhanuka has beautiful sets, magical music, exquisite dance, high pitch performances, dramatic actions, extremely well-written dialogues and an encaptivating way of telling Ramayana. Both the producers credit the artistic excellence of the visionary writer and director, Mr. Atul Satya Koushik, who has time and again proved his mettle with theatre plays.

Ishaan Yadav and Neha Dhanuka are also into fresh yet intense concepts. Their last play, Pajama Party is a satirical modern-day Hindi theatre play, which touches upon the #metoo wave highlighting crime against women and explains what consent means in a very subtle way. This play stars gorgeous actor Kamya Panjabi and national award winner in theatre, Sunil Palwal.

Ishaan's Hindi theatre play, Ballygunge 1990 was also a hit and now Ishaan and Neha have successfully launched The Legend of Ram and Pajama Party. Forte of their productions is lavish colourful sets and glamorous characters for which both of them credit the grand vision of Writer / Director Mr. Atul Satya Koushik.

Theatre passionate producer Ishaan Yadav says theatre plays to date have been limited to niche audiences but he wants to take them to every corner of India. Producer Neha Dhanuka also thinks that the true art of a performer can be tested only in theatre, where there are no cuts and no re-takes, one impromptu shot and you are done. Both of them envisage taking theatre plays to the youth, to the old, to the schools, to the colleges, to every section of the society.

In their early thirties, Ishaan and Neha are emerging as young and dynamic producers. Apart from production, Ishaan has also acted in a South Indian film and Neha is a Chartered Accountant and had been a management consultant.

Ishaan Yadav and Neha Dhanuka are consistently working towards their upcoming projects which may include a bouquet of amazing dramatic short films. When asked whether we can see them moving towards TV serials or web series, they said they have grand plans and want to be appreciated for their work across the traditional platforms like theatre as well as modern trending platforms like web-series. Their vision is promising and we are eager to see more from them!

Next Story : Grow your savings by over 45 per cent with a Bajaj Finance FD