The Success of Passion with Scrawled Stories - Krunal Patel

Scrawled Stories has always been an open platform that has enabled writers to learn from, and with the upcoming app, there'll be even more opportunities to come forward and establish themselves 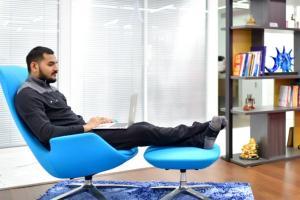 
When thoughts meet words, and words meet the internet, a circle of exchange is created. And this circle has seeded on many platforms. One of which is Scrawled Stories - a well-known brand in the literature community on social media.
Scrawled Stories is recognizable for its relatable topics, musings, and snippets that go viral in a matter of minutes. The brand was founded by Krunal Patel, a self-established businessman who laid aside his family business in Chemical manufacturing and elevated his desire for articles and stories on a whole other level.

The 'Scrawled Stories' brand was developed back in 2015, and since then has grown into a vast platform. It has over 3 million followers across all social media sites, with over a solid 4,000 stories and sayings published since its time. It has been disclosed by Krunal that the page has seen rapid growth with about 6,000 followers or more coming in on a daily basis. They are the first to have developed a User Generated Content model through which around 500k entries are received from more than 10k writers all around the world. These are then carefully reviewed and approved by the Scrawled team.

Krunal has experimented with many genres of literature on the page but has found that people lean more towards everyday happenings or relatables. Micro-tales, where one gets a sense of déjà-vu or a visual into the future is what captivates them. Apart from these, Scrawled Stories has an array of posts on social matters, long stories, musings and so on.

Scrawled has featured small and big writers worldwide and helped them reach a sound audience, either through a selection of their entry, sponsored post or formal promotion. However, they have never engaged in cheap advertisements to promote their page. The numbers on Scrawled are all real and organic.

The first brand collaboration Scrawled Stories had was with Bank Bazaar, that in actuality opened up the gates for other businesses to enter. They have since then collaborated with huge business brands like OYO Rooms, Engage Deo, Red Chillies Entertainment, Brand Factory, famous influencer Gary Vaynerchuk, and more.

Any collaboration goes up to 70,000 INR per post on Scrawled Stories, whereas month-long or annual collaborations target a six-seven figure amount based on the project.

With so much fame and success already in the bag, one might think they've done it all and settled down. But here's more news – Scrawled Stories under the leadership of a proud Krunal Patel have announced the release of their app which is due in November. The app will be available to download from the App Store on iOS and Play store on Android.

What's even more interesting is that the app is said to be the first one that'll provide a status of the writer's submission on their app profile itself. The posts will also be displayed and divided into different categories depending on the trend they hold. Readers will have the privilege to filter and read the content only as per their desires too. All in all, the Scrawled Stories app is quite the catch to look out for and explore.

Scrawled Stories has always been an open platform that has enabled writers to learn from, and with the upcoming app, there'll be even more opportunities to come forward and establish themselves. The team is always on the lookout for tales based on relatable topics such as friendships, romance, family, etc., that easily attract the public. Krunal and the team take a proactive stance in delivering the best content that'll be a treat to the eyes of every reader. It's no wonder why the audience is still hooked onto them!

Krunal Patel has taken Scrawled Stories to a mighty high level and still continues to steer ahead. He, along with the team, is gelled well enough to operate fast-paced. It's honestly a marvel how a brand has escalated into a huge media platform that attracts the eye of many.

The huge positive response that Scrawled Stories continues to receive is one of a kind. The aim to go forward and shine brighter than ever is a motivating aspect to follow. "We believe that everyone is a writer and everybody has a story to tell. And that's exactly what we're looking for" – Krunal Patel.