Photography which was his hobby back then is his full-time profession now. He along with his wife Zankhana own Wildlife Sojourns 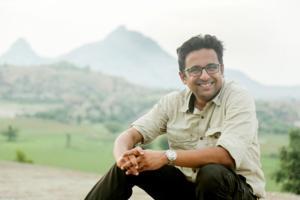 
Patience is the most important aspect every photographer must possess. Photographers spend most of their time to get that one perfect shot. Wildlife photography, in general, is not as easy as it seems. Having expertise in clicking some of the best pictures of nature and wildlife, Bhasmang Mehta is a wildlife photographer who switched his profession after being an industrialist for 11 years. Born in the family of doctors in Ahmedabad, he completed his graduation in 1997 after which he joined his family’s pharmaceutical manufacturing business. The year 2011 saw Mehta make his foray into wildlife photography.

Photography which was his hobby back then is his full-time profession now. He along with his wife Zankhana own ‘Wildlife Sojourns’, a photography company which has captured some of nature and wildlife moments till date. Remembering an incident where photography taught him to be patient, Bhasmang said, “In 2011, while on a birding trip to Harike Lake, Punjab I had to wait for almost 10 hours to get the perfect shot of ducks called Red Crested Pochard and eventually couldn’t get the shot as the birds were too shy and wouldn’t come anywhere near the camera’s range. Apart from this, Bhasmang has had several memories in his career.

He shared yet another incident from his 2016 tour to Phobjika Valley, Bhutan. “We had gone there to photograph rare Black Necked Crane and we had to walk almost 9 km up the hill in 0 degrees. Once we were close to the site where the birds were roosting, we discovered that the last leg of the journey wasn’t possible as there was a lot of knee-deep mud in between the birds thus we could see them but couldn’t photograph them.” But by God’s grace, during the same trip, mother nature blessed Bhasmang and his team with the rarest of the rare sightings as they got to capture White-bellied Heron, species of birds whose number is just 150 to 200 in the wildlife now.

Next Story : Meet Aliya Hamidi, one of the biggest TikTok stars in the country