Film Producer Manju Bharti is all geared to launch a new song Jhumka Bareilly Wala for her new film, which will be graced by Disco King Bappi Lahiri's mellifluous voice, sung in his signature style 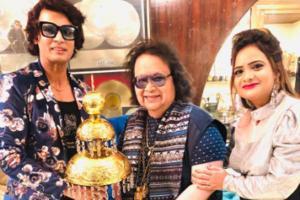 
Recently, the city of Bareilly has finally, after 54 long years found its legendary long-lost jhumka that was dropped in 'Bareilly ka Bazaar'! And it seems that now Bollywood too has joined Bareilly’s festive revelry of this find! Film Producer Manju Bharti is all geared to launch a new song “Jhumka Bareilly Wala”, for her new film, which will be graced by Disco King Bappi Lahiri's mellifluous voice, sung in his signature style.

Bappi Lahiri had congratulated actor Mukesh J Bharti on finding the famous jhumka who in turn credited this wonderful achievement to Dr. Keshav Aggarwal, the Chancellor of Bareilly University. It is Dr Keshav Aggarwal who has gifted the monumental 270 kg earring to the city which has been installed by the Bareilly Development Authority at a three-way intersection, which is now quickly becoming famous as 'Jhumka Tiraha'.

Producer Manju Bharti shall be carrying out the entire shooting for this film in the city of Bareilly itself. ‘Ishq Nachaunda Hai’ is being made under the banner of Vivek Films Production House and Producer Manju Bharti revealed that this would be her fourth film. Furthermore, she also revealed that before 'Ishq Nachaunda Hai', we shall be seeing her film 'Pyaar Mein Thoda Twist' that is also going to be released very soon.

'Pyaar Mein Thoda Twist' has been shot entirely in the City of Nawabs - Lucknow, Uttar Pradesh, and the foot-tapping music score for this film has also been composed by Disco King Bappi Lahiri! The main cast for this film includes many talented performers like Mukesh J Bharti, Richa Mukherjee, Rajesh Sharma, Atul Shrivastav, Alka Amin and Santosh Shukla.

Manju Bharti's 'Pyaar Mein Thoda Twist' is a remarkable comedy-drama that is guaranteed to impress.

Next Story : Mohit Modanwal wins hearts of children on Day 1 of WindMill Festival