Raja Mukherjee wins BIG, honoured as The Most Stylist Emcee of India

The man of many talents, Raja Mukherjee wins BIG at BW Applause Awards and Conclave 2020 as he gets honoured as The Most Stylist Emcee of India 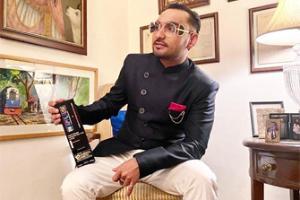 The man of many talents, Raja Mukherjee wins BIG at BW Applause Awards and Conclave 2020 as he gets honoured as The Most Stylist Emcee of India.

Widely known for his excessive energy, his propensity to connect with the audience and of course his on-point style game, Raja Mukherjee has reached to another milestone in his career by bagging one of the most acclaimed awards in the service sector.

The BW Applause Awards is one of the most coveted awards in the Event and MICE industry space to acknowledge the achievements in the areas of Experiential Marketing, Event Industry, Weddings & MICE industry.

Raja Mukherjee is one of the most stylish and reputed Emcees from the service industry. From festival IPs to corporates to weddings to custom music creation for brands and YouTube interview series, Raja has been into the industry for over a decade and is running strong with his ever charming talent.

Raja who is a spectacular Emcee adds charm to it with his dazzling and accurate styling. From rocking the 3XL street wears, to donning suits and Jodhpuris, Raja has set a benchmark and how!

Expressing his gratitude, Raja shares, "Thank you the business world for acknowledging something that is very personal to me and something I believe in STYLE!
For me, style is an Expression. Growing up as a rebel to suiting up at the best corporate stages, to rocking the freshest and most luxurious IPs to Performing rap music on stage.
Two things that have been constant in my life
1. The microphone
2. My way of expressing my character on stage on the mic which is my style. #MicrophoneDuties".

He further adds, " This wouldn't have been possible without my very special friend Ms Sarita Raghuvanshi thank you for always helping me decide what to wear because. Sometimes when you are rocking a statement you just don't know, how much is crazy is the right crazy. Last but not least. I would like to thank my self. Yes absolutely. From Rocking 3XL Street Wear to suits to jodhpuris. It's not just fashion and clothes. It's my journey as a man that I see evolve. Best of luck whoever is winning the best emcee or best emcee corporate. I'm coming for that one next year.
#MicrophoneDuties Raja .. Peace!