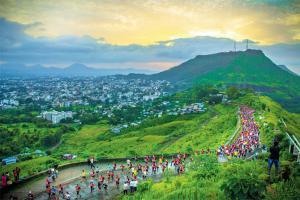 
The Comrades Marathon held in the KwaZulu-Natal province of South Africa is considered to be the world’s oldest and largest hill marathon. Runners across the globe aspire to complete it within the designated span of 12 hours. Drawing inspiration from it, Dr Sandeep Suryakant Kate founded Satara Runners' Foundation, a non-profit that organises the Satara Half Hill Marathon (SHHM) in the historic city, which is Kate's hometown. It is now recognised as the Mini Comrades Marathon of India, covering 21 km of the Sahyadri mountain ranges. "We are proud to be among the first to bring the concept of a marathon to the smaller cities of Maharashtra and make running a common practice among people from all walks of life," Dr Devdutta Deo, race director of SHHM, tells us.

After making it to the Guinness Book of World Records for having the most people run in a mountain race thrice in a row and being recognised as one of the 50 best races in the world by the UK’s Runner's World magazine, every edition witnesses an increased number of finishers out of total registrations. Its growing popularity attracts international participation and attendance of more than 10,000 people from Australia, Ethiopia, Kenya, USA and the UK, generating employment and tourism in the local regions.

Each year, the marathon follows a theme to take a stand on important issues facing the country. This year, they are paying tribute to the Indian Army with their theme, Main Bhi Sipahi, to remind citizens of their responsibilities towards nation-building and to salute Army officers for their services to the country.

Next Story : A stage for the complete picture