Roping people from different walks of life into a choir 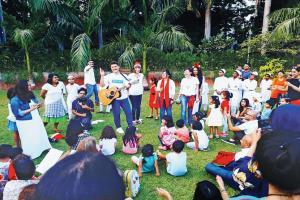 
It was in November last year, while pursuing a story about a flash choir that was to be held in a park in Mumbai, that we found ourselves at Haiku JAM, a cultural space in Bandra. That's where we'd met Tristan Knelange for the first time. The Dutch conductor, settled in the city for the past two years, was setting the space up for all the choir members scheduled to show up for rehearsals. We, however, were there to talk to Anca Florescu Abraham and Tina Nandi Stephens, the two people behind Love Your Parks Mumbai (LYPM), under whose aegis the flash mob was to be held. But during the course of our conversation, we also noticed how the room became filled with people of different ages and from diverse backgrounds, who Knelange had assembled to play music together.

That flash choir was an eventual success, with over 100 people witnessing the first performance at Patwardhan Park in the suburb, and a similar number turning up for a subsequent one. And that set Knelange thinking. Why bring something good to a grinding halt just because two initial events are over? So, when he had a chance to perform at Ketevan Sacred Music Festival in Goa in February this year — and was asked to return for the 2020 edition with his own choir — Knelange had an idea. He told himself, "Let's revive the LYPM outfit and make it a more chiseled product." And that's how Kokomo, Mumbai's newest choir, which will play its inaugural concert this week, came to be formed.

Some of the members have been retained from the original LYPM unit. Others joined after word spread about Knelange's efforts. A total of 20 people were finally selected, from various musical backgrounds. The Dutchman tells us, "There are some jazz singers. I have a few people trained in Hindustani classical. There are others from a hip-hop and dance background. And there are also some who have very little experience as singers. But being part of a choir means that your individual voice is less important. Instead, it's about how you blend as a whole, and my job as a conductor is to find out what the average voice of all these people can be [so that they sound harmonious together]." 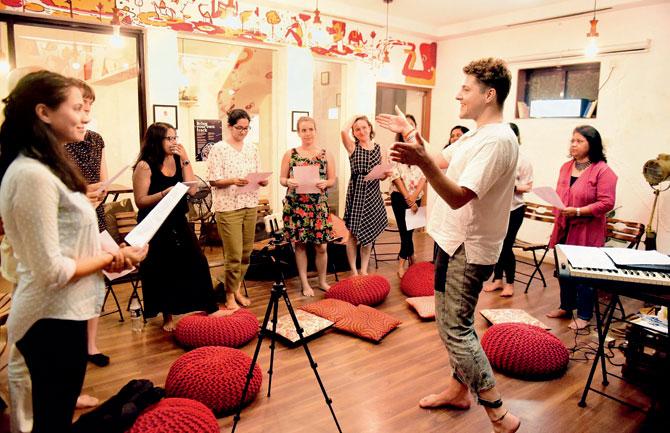 Tristan Knelange takes a choir through the paces at Haiku Jam in Bandra. Pic/Bipin Kokate

He adds that the sound he's aiming for involves western classical vocals being the sonic fulcrum around which various other musical influences — such as South Indian, Native American, and indigenous Latin American and Australian traditions — revolve. The overall structure has a heavy dose of percussion, an aspect that is being orchestrated by multi-instrumentalist Anand Bhagat. All the choir members get together once a week for rehearsals at Furtados School of Music in Khar, which is backing Kokomo. And the idea, Knelange says, is to build a sense of community among the people, because singing together is essentially a social act. "Think about it. How often do people in Mumbai get to see their friends and family? Once a week is a lot, especially in an age when everybody is just sitting behind their computer screens and tapping keys on their mobile phones," he adds.

He also says that Kokomo will soon undergo a bit of a hiatus since he has to fly back to The Netherlands till September for projects lined up there. "But the plan is to regroup once I'm back and play different concerts, in preparation for Ketevan Sacred Music Festival," he tells us, though before that, there is of course their debut concert, which will be a practical example of how the medium of music can be used as a community-building exercise.

On: April 5, 7 pm and 9 pm; April 7, 6 pm
At: The Cuckoo Club, next to Candies, St Andrew's Road, Bandra West (April 5); The Russian Centre of Science and Culture, opposite Sterling Apartments, Peddar Road, Tardeo.
Log on to: insider.in
Cost: Rs 499

Next Story : An evening to celebrate in Mumbai with poems in Urdu and Hindi