Loan apps case: No help in sight, it's a lone battle for victims

If some borrowers of instant loan apps took extreme steps to escape harassment by recovery agents, countless victims are still waiting for some police action 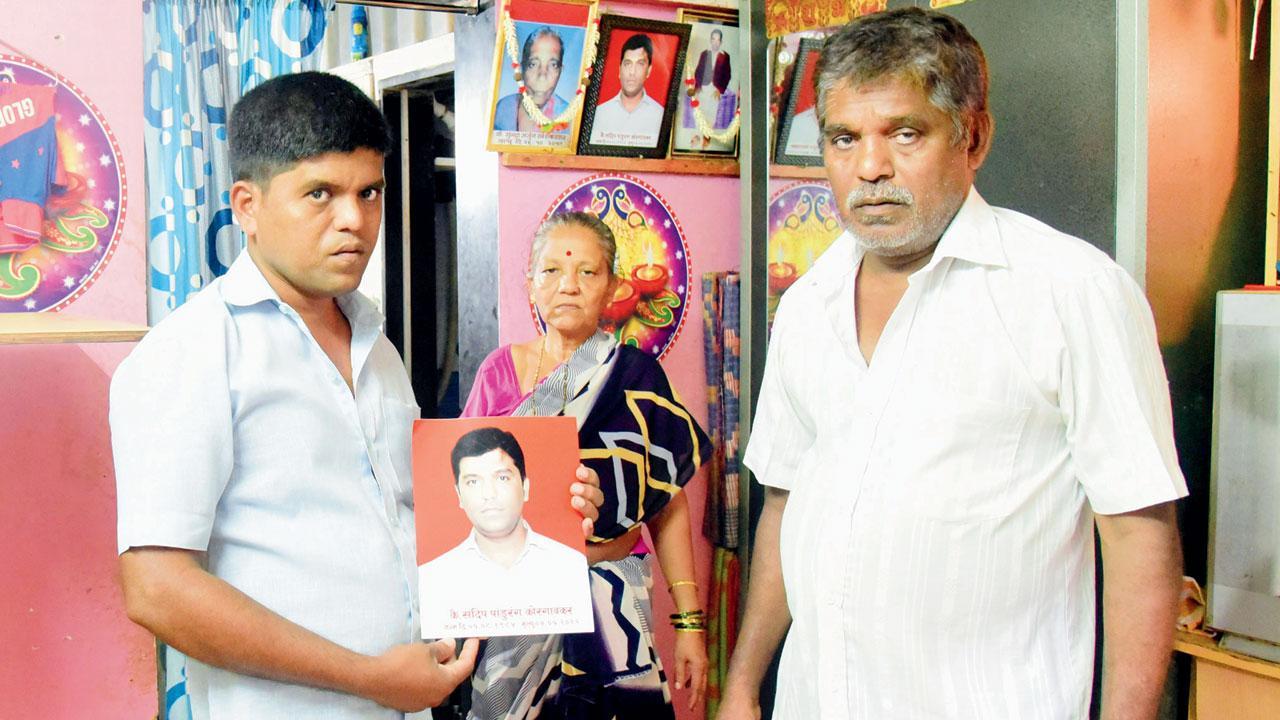 Korgaonkar’s parents and brother at their Malad home. Pics/Atul Kamble

Unable to bear the trauma of being labelled as a “rapist” and “killer” by recovery agents of a loan app, Malad man Sandeep Koregaonkar hanged himself on May 4. Daksha Boricha, a talented drum artist, ended her life on March 16 after rogue agents branded her family “chor”. In November 2020, Abhishek Makwana, a writer for Tarak Mehta ka Ooltah Chashma, met the same fate due to a loan app whose vasooli men called him a “cheat”. While none got timely help from the cops, thousands of harassed borrowers of these apps are living on the edge over police inaction. 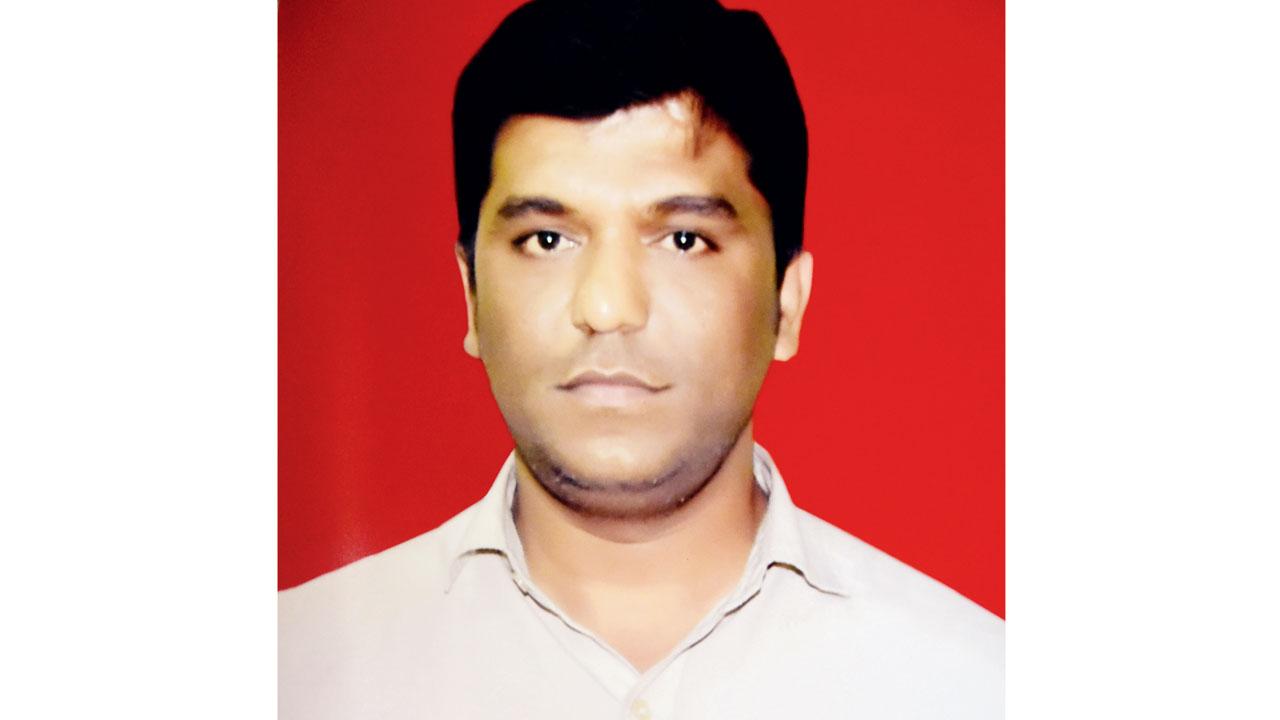 Sandeep Korgaonkar, who hanged himself on May 4

Mid-Day met several borrowers and the families of Koregaonkar, Borcha and Makwana. In all cases, the victims, whose morphed photos are being circulated among their acquaintances, have no clue about the ways to get rid of recovery agents and their messages and calls. Filing a police complaint isn’t easy. For those who succeed, the investigation moves at a snail’s pace, mid-day found.

‘He was a helpful man’

A resident of Shivneri Chawl, Maharashtra Nagar, Malad East, Sandeep Koregaonkar was the only earning member of his family. His brother Dattaguru said Sandeep had got married a year ago. The brother said Korgaonkar, 38, had availed Rs 4,000 from Quick Loan app. While he paid it back, the harassment by recovery agents didn’t stop. He even gave a complaint to Kurar police on April 27, but nothing happened, said Duttaguru. 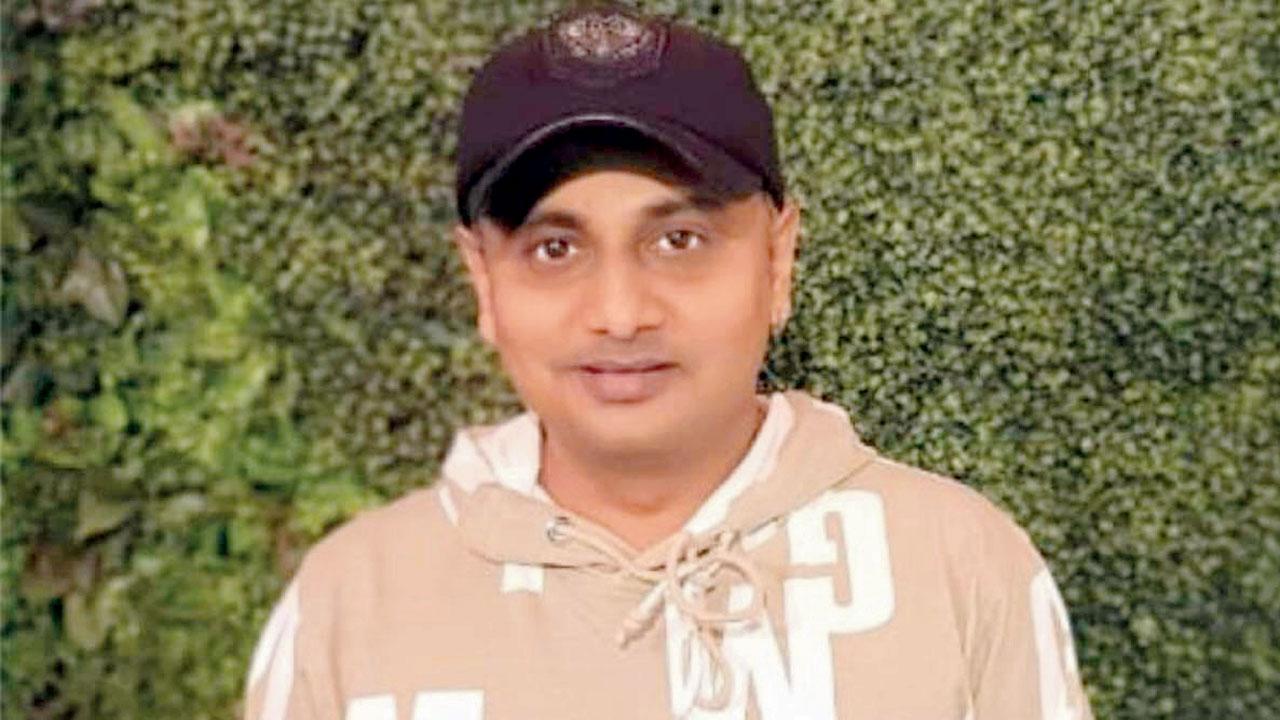 Abhishek Makwana, who killed himself over loans, was a writer for Tarak Mehta ka Ooltah Chashma

“They circulated a morphed image of Sandeep among his contacts saying that he had raped and killed a 12-year-old girl. He was a helpful person and had an excellent image in our area as well as in his office. He just couldn’t take the trauma of being called a ‘rapist’ and ‘murderer’,” said Duttaguru. “On May 4, Sandeep asked to get some food from outside. By the time I returned, he had hanged himself. After his death, the police registered an FIR and started an investigation. We’ve lost faith in the police,” said Dattaguru.

A talented drum artist, 43-year-old Daksha Boricha lived at Parmeshwar Krupa Society, Rawal Nagar, Bhayander East with his 75-year-old mother Ratan Boricha. She had won many awards and was also featured in the Limca Book of Records. Ratan said her pension stopped during the lockdown and Daksha’s income also came to a halt. “Daksha took Rs 25,000 from Quick and Sunshine. She repaid the loans, but the recovery agents morphed our photos and WhatsApped them to our friends and relatives calling us ‘chor’.” 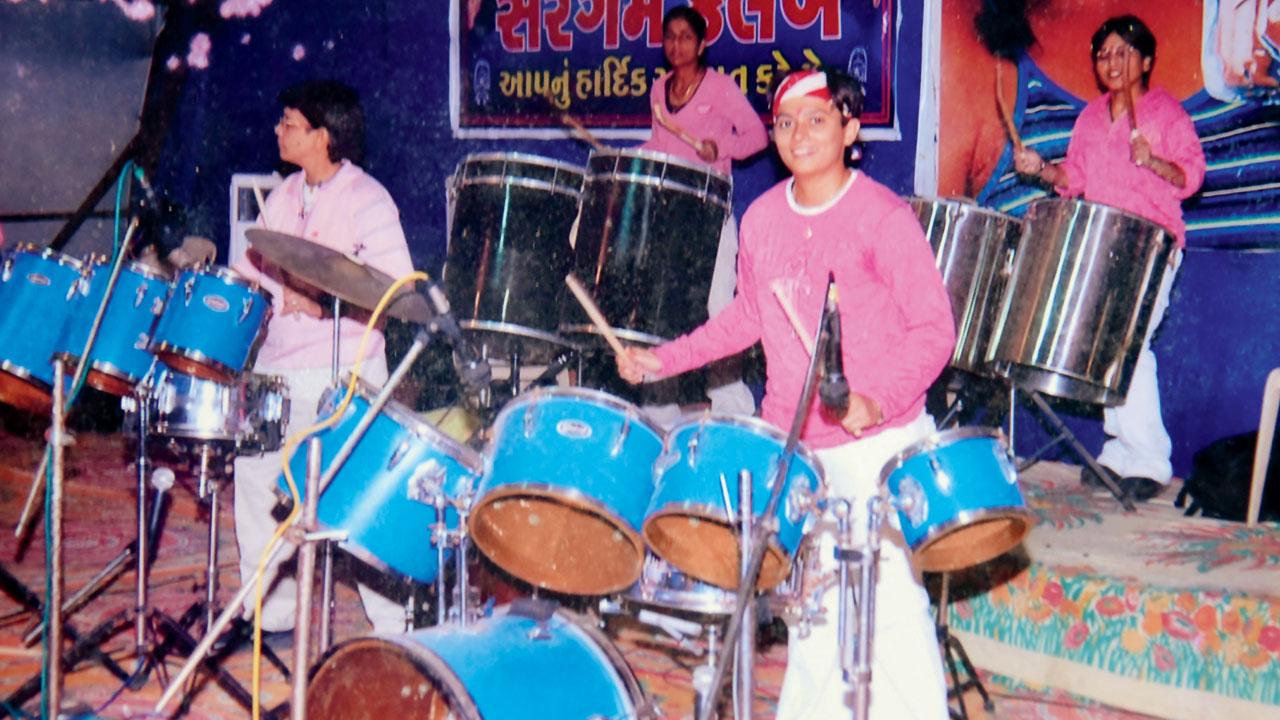 On March 14, Holi day, Daksha stepped out and never returned. “We registered a missing person complaint. On March 16, her body washed ashore at Gorai. In her suicide note, she wrote that the recovery agents who spoiled her name should be arrested,” said Ratan.

Popular show under his belt

Abhishek Makwana was a writer for popular show Tarak Mehta ka Ooltah Chashma. In November 2020, he ended his life due to torture by recovery agents. His family said Makwana’s income was badly hit during the pandemic. He borrowed Rs 30,000 and repaid Rs 2-3 lakh but was still blackmailed. His brother Jenis said the recovery agents morphed his picture and portrayed him among his contacts as a “cheat”. Jenis said, “My brother went to the police many times but they never took action.” 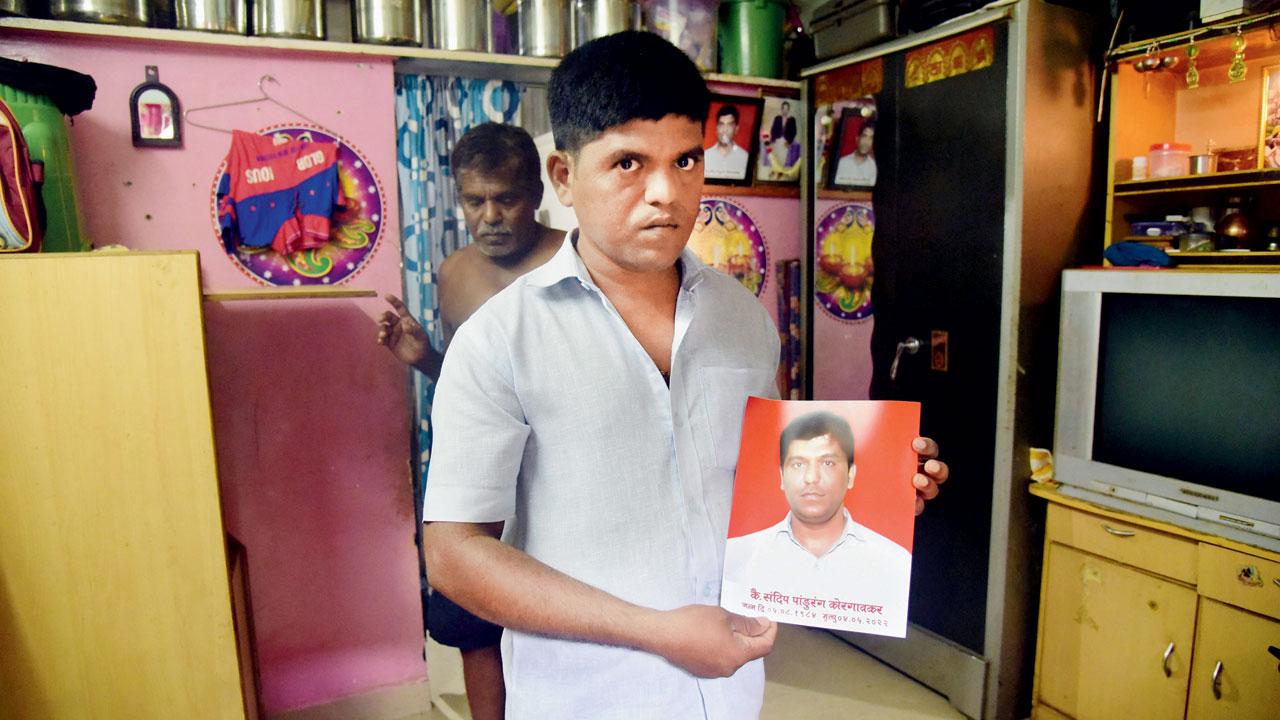 Brother of Sandeep Korgaonkar, who died by suicide to harassment by recovery agents, at his Malad home. Pic/Atul Kamble

Jenis said, “On November 27, 2020, Abhishek hanged himself. The Charkop police cited his suicide note to claim that he had taken his life due to financial problems. Later, I checked his email and found that he had taken loans. The police have registered a case but no arrests have been made yet,” he said.

Ahead of his wedding, Anilkumar Rajbhar, 41, sought a loan through Rupee Tiger app. He was given only R6,000. He replied saying he needed a bigger amount and repaid the money, but abusive calls from recovery agents didn’t stop. He went to the Parksite police station and filed a complaint on May 3. Senior PI Vinayak Mer said a probe is on.

‘They didn’t even spare my kid’

A 34-year-old man who runs a mess at Gowalia Tank area received a message with a link for a loan. On clicking it, he was routed to Dutta Rupee app. He received Rs 8,000 after sharing his personal info and bank account details. While he was told to repay the money within 8 days, a recovery agent demanded the money on May 10, ahead of the last day. The next day, the man sent Rs 10,720 to the account given by the agent. However, calls kept coming. When he stopped taking them, the agent morphed his 8-year-old son’s photo and shared it with his contacts. The Gamdevi police registered a case on May 12. While the cops refused to share any details of the investigation, the complainant said there has been no progress.

Abhishek Makwana, who died in Nov 2020

‘They ruined my Eid’

On April 23, delivery boy Sohail Mohammed Sheru Sheikh borrowed Rs 3,500 and Rs 2,500 from Cash market and Magic loan apps, respectively. The 23-year-old Bandra resident was asked to repay on April 30, but he got a call on April 29 with the caller threatening to defame him if he didn’t pay up immediately. During Eid festivities on May 3, his six neighbours and friends told him that they had received photos of him with messages that he was not repaying his loans. Sohail filed a complaint at Bandra police station. Inspector Sagar Nikam said there has been no significant development in the case.

‘My salary was delayed’

On April 27, Rajeshkumar Ramani, 32, sought a loan from Janecoin app as his salary was going to be delayed. He was given Rs 6,362. On May 2, he received a link asking him to pay Rs 2,002. He was then asked to pay Rs 2,001 twice which he readily did. Then he was again told to pay Rs 5,000. However, he started getting abusive messages and pictures. When he contacted the recovery agent and told him that he had already paid the money still he was asked to pay Rs 5,000. After that, his friends also received his morphed pictures and messages. Ramani filed a complaint with Kurar police on May 10. Inspector Raviraj Jadhav said, “We have started the correspondence with the app officials. We are trying to track down those who have done this.”

‘My ailing wife was defamed’

A 26-year-old Vasai man download KOKO app as he needed money for his wife’s surgery. On February 1, his wife’s account received R5,800. He was given 5 days to repay, but he missed the deadline due to financial constraints. On March 4, he received a call from a loan recovery agent asking him to repay the loan to which he asked for more time. On March 7, he received a call from his friend that he had received morphed nude pictures of his wife. Worried, the man paid Rs 10,000, but then his mother received a morphed picture of his wife. On May 9, he then filed a police complaint. Vilas Chougule, senior PI of Pelhar police station, said, “There has been no progress in the case.”

No loan, but too many calls

A 24-year-old woman received a message on March 30 that she had borrowed money from Wallaby app. The woman replied saying she had not taken any loan. Soon, she started getting messages from several loan apps demanding repayment. After the callers sent abusive messages to her contacts, she paid up to Rs 4.5 lakh through several links that she had received. Her friends then received a morphed image of her with a message that she was a sex worker. On April 14, she filed a complaint with the Charkop police. Inspector Abhijeet Abhang said, “We have traced two numbers. They are from Kolkata. The Charkop police and cybercops are working on this.”

In the past 48 hours, a 28-year-old software engineer filed a complaint with the Vikhroli police claiming harassment by loan recovery agents. The woman had borrowed Rs 4,400 from Quick Loan and Instant Loan apps. Another case was registered with BKC police after a 32-year-old engineer filed a complaint against unknown persons for harassment. He said he had taken a loan of Rs 3.75 but had already paid Rs 15 lakh.

“In 99 per cent of the cases, even if the borrower rushes to the police station and tries to file a complaint, they take a non-cognizable (NC) complaint. Those complaints that turn into FIR do not see any progress. In the case of women, sections of sexual harassment and defamation must be mentioned but it never happens. Top cops must understand that if they don’t stop these apps and their agents now, it will turn from bad to worse in the near future,” said Nikkhhil Jethva, founder, Loan Consumer Association.

100+
No. of complaints received by Maha Cyber Cell daily