In the petition filed before the Supreme Court, Rhea Chakrabortys lawyer has said that all the witnesses related to the case are recording their statements in Mumbai 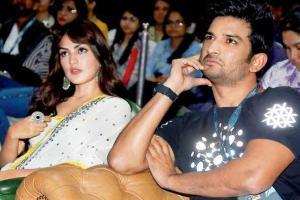 
After late actor Sushant Singh Rajput's father Krishna Kishor Singh filed an FIR against actor Rhea Chakraborty, her lawyer has moved the Supreme Court on Wednesday, seeking transfer of the investigation to Mumbai. In the petition submitted electronically in the apex court, actress Rhea Chakraborty's lawyer has sought to transfer the investigation of the FIR lodged in Patna to Mumbai.

On Tuesday, late actor Sushant Singh Rajput's father KK Singh had lodged an FIR against the actor's rumoured girlfriend and actress Rhea Chakraborty at Rajiv Nagar police station in Patna. In connection with the investigation of the same, a team of Bihar Police arrived in Mumbai on Tuesday.

An FIR was filed by Sushant Singh Rajput's father against Rhea in Bihar yesterday.

In his application, Rhea's lawyer said that the Mumbai Police is already investigating the suicide case of late actor Sushant Singh Rajput. In the petition, the lawyer of Rhea Chakraborty has also said that all the witnesses related to the case are recording their statements in Mumbai. In such a situation, an investigation cannot be conducted in two places. The petition states that Chakraborty wants to cooperate in the investigation.

Rhea's lawyer Satish Manashinde, in the petition, said that when the investigation is already going on in Mumbai and people are fully aware of it, it is illegal to file a case in Bihar in the same matter. Speaking to mid-day, actress Rhea Chakraborty's lawyer Satish Manashinde said, "A petition has been filed in the Supreme Court. In this, there has been a demand to transfer the investigation of Sushant Singh Rajput case to Mumbai."

It must be noted that on Tuesday, the late actor's father K.K Singh filed a case against actress Rhea Chakraborty and six others, including her family members. The case was filed under various sections, including abetment of suicide.