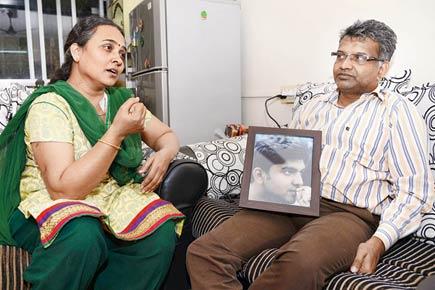 Even as campuses across the country are seized with outrage over the suicide of Dalit student Rohith Vemula at Hyderabad University, the family of IIT-Bombay student Aniket Ambhore, who fell to his death from a hostel terrace, is still waiting for closure 15 months after his death. 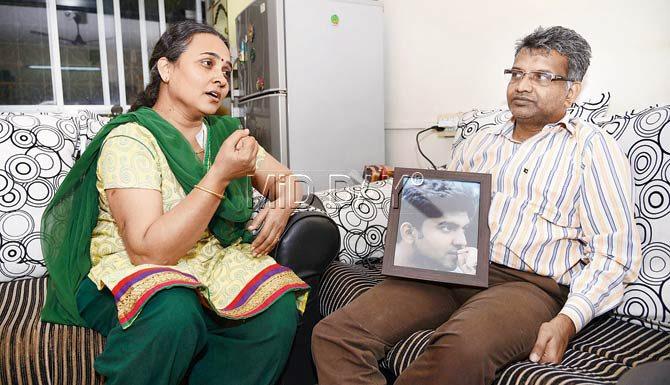 Aniket’s parents Sunita and Sanjay are frustrated by the apathy of authorities. Pics/Suresh KK

Aniket’s parents and friends told mid-day on Wednesday that the Dalit student was subjected to continuous taunts over his caste in the months leading up to his death. Aniket was found dead below the six-storey hostel building on September 4, 2014. Even today, neither the police nor the institute, which set up a probe into the incident, has told the family the reason behind Aniket’s death. 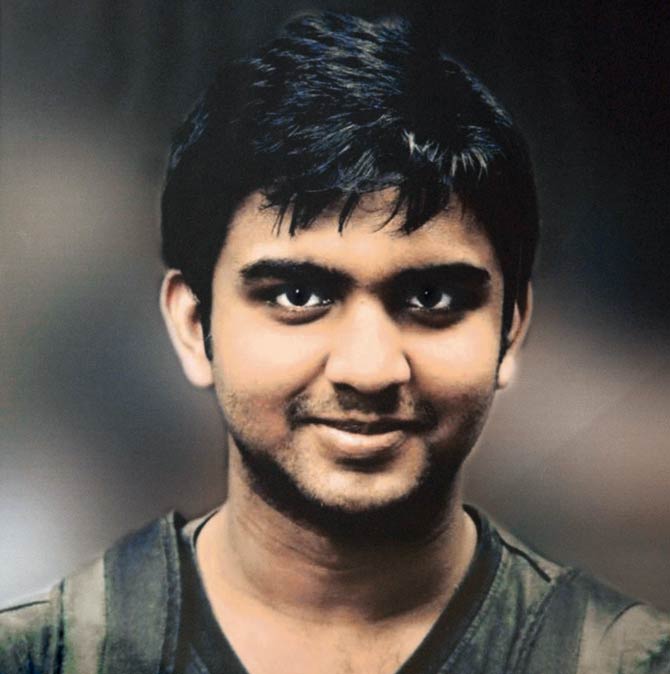 Aniket Ambhore fell to his death from a hostel terrace

The family told mid-day the slurs had heightened just before his death, with even a professor in his remedial class and the head of a department being among those who berated him as being dull because he was a Dalit. But the institute, they alleged, has till now not submitted a report by an enquiry committee that was set up to look into the circumstances of Aniket’s death. 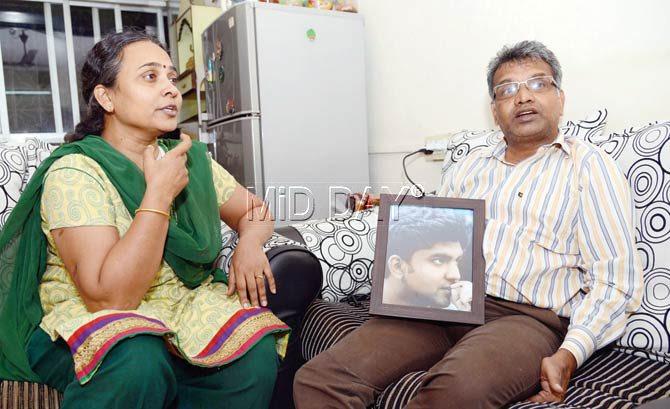 Aniket’s parents at their Prabhadevi home

Ambhore’s mother Sunita told mid-day on Wednesday that she could understand what must have forced the 22-year-old Hyderabad boy to take the extreme step.

“Aniket did not leave any note for us,” Sunita told mid-day. “But when I read Rohith’s note I could understand what my son must have been feeling. Only after Aniket’s death did we find some lines scribbled in his books about how empty and lonely he was feeling.”

The Ambhores said Aniket grew up not being aware of caste discrimination and did not know how to handle it when he faced it on campus. He initially took it as a consequence of his poor grades. Ambhore’s father Sanjay said he had turned to spiritual books towards the end of his term at IIT, though the entire family was atheist.

“There was no pressure on him from us,” Sanjay, who works with a nationalised bank, told mid-day. “We were willing to withdraw his admission if it was getting too difficult for him. We even had this discussion with his department head after he failed in some subjects. But everybody said he would catch up. But before his death, he had told us how a professor had berated him in front of the entire class about how easy it was for Dalits to get to IITs through reserved category. He must have gotten very lonely due to the continuing taunts over his caste. The entire nation is talking about the Hyderabad incident, but Aniket’s case remains unresolved.”

Sunita said she had noticed how even close friends on campus often directed casteist remarks very casually at Aniket. Following his death, the family wrote to the HRD ministry and the National Commission for Scheduled Castes besides constantly following up with the institute. With no response, they managed to get their MP to raise the issue in the Rajya Sabha, following which the probe committee was set up.

“But even now, we do not know the conclusion of the committee’s inquiry,” said Sanjay, who had spoken to his son the day he died. “I was on my way to the Institute to pick him up as he was to come home that day.
After knowing where have I reached, he told me that he is going to sleep now. So we did not call him again as he never liked to be disturbed when he was sleeping.”

Prejudice exists
Sanjay said IIT officials would call them over only when they called to ask about the status of the probe. The institute’s Ambedkar Periyar Phule Study Circle later stepped in to help the Ambhores in their quest for closure.

“They never spoke to Aniket’s friends and other students from the improvement class to know the facts about the casteist remarks,” said Sanjay. “We had to request his friends to go to the authorities and give their statements.”

Even then, the college tried to spin it as a case of depression, the family alleged. Sanjay said they were aware that Aniket was disturbed and was undergoing psychological treatment in the months before the incident.

“He accepted there was a problem but was clear that he had to face it,” said Sunita. “This shows he was willing to come out of his disturbed state.

Members of the Ambedkar Periyar Phule Study Circle said even they had tired of trying to impress upon authorities about the casteist slurs on campus.

Rakhahari Saha from the group told mid-day, “Caste discrimination on IIT-B campus is not explicit. Remarks and taunts from professors as well as students coming from general categories do affect Dalit students.
Their confidence level goes so low that having an open discussion with faculty members also becomes difficult. This happened in Aniket’s case also. Worst is that even faculty members have the same prejudices, so Dalit students do not come forward.”

Another member, who did not want to be named, said, “The authorities have completely ignored the caste slurs in Aniket’s case. They have turned it into a mental health issue. Whenever we talk to them, their response is always about how they are doing a lot to counsel students. At IIT-B, caste discrimination is an issue never spoken about as neither institute nor students want to talk about it. In fact, many students are trying to hide their caste, fearing the constant taunts. There is a general prejudice among students coming from open category. IIT-B as an institute also adds to this. The official opposition to quotas is well known.”

Students said unlike with their peers, the discrimination by professors is often subtle.

“A professor will randomly ask for your JEE rank to know your background,” said another student. “Then they will pass comments like how it is only students from reserved category who require remedial teaching, etc.”

IIT in denial
Dean of Student Affair at the institute, Prof Soumyo Mukherji, denied there was any casteist slur in Aniket’s, or any other, case. He said the committee was formed “to understand the mental health situation of students on campus and suggest preventive measures to avoid such unfortunate incidents in future.”

“There is no mention of caste remarks or taunts in the report,” said Mukherji. “But in an individual scenario, one would not know. The institute has a strict policy against any kind of discrimination. We have never seen such a compliant go unnoticed or unpunished. In Aniket’s case, it might have been a general comment on students who are lagging behind in studies and attending academic improvement classes. But it might have been perceived differently. This is one unfortunate incident but issue of mental health of students on campus is much larger.”

The Ambhores are unconvinced. The least the institute could do, they said, was to give them so-called report if it was indeed submitted. And help them find closure.