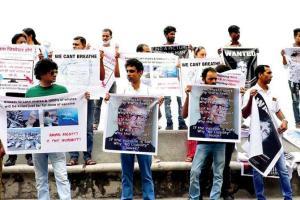 The protesters hold up their placards at Marine Drive on Friday morning. Pic/EyeAmSid


Protestors came together under the banner of 'Awaken India' at Marine Drive on Friday against the government's mandatory mask-and-vaccine policy and demanded an end to the lockdown, a right to choice of treatment and no forced testing.

The protest, which was initially supposed to happen at the Mahatma Gandhi statue opposite Mantralaya at 11 am on the occasion of Gandhi Jayanti, was shifted to Marine Drive after police took away protesters' banners and forced the group to disperse.

One of the posters read, 'If the 6-feet (distance) works, then why the mask? If both work, why the lockdown? If all three work, why the vaccine? If the vaccine is safe, why 'No Liability' clause?'

Yohan Tengra, 23, who spearheaded Friday's protest, says they were supporting a call for a nationwide protest given out by some doctors in the movement in Delhi. When asked if Friday's protest marked the arrival of the anti-mask movement in Mumbai, he said, "You can say it is something like that. It's just that people don't feel comfortable wearing masks and a lot of them face breathing issues because of it. We are not against people wearing masks, but it should not be forced upon them."

Yohan says that the COVID-19 pandemic is not about 'China or India' but about 'major pharma and tech companies who are controlling the media and our daily lives.' 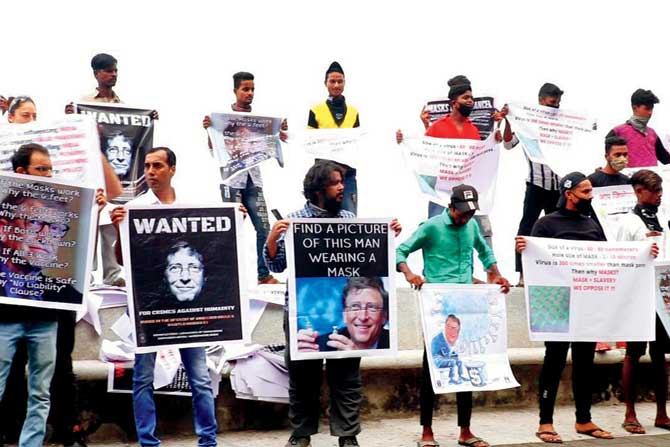 The protest was supposed to happen at the Mahatma Gandhi statue near Mantralaya initially, but moved to Marine Drive later. Pic/EyeAmSid

Noted activist Feroze Mithiborwala, who was also present at the protest, says that although he has been researching the New World Order for more than 25 years now, he wasn't much of a believer in the conspiracy theories surrounding mandatory vaccination when the lockdown first began. "It was only when I saw the horrors of the lockdown and how it was being imposed on people, how it was causing the destruction of the global economy, was I able to understand that this is all about putting money in the pockets of big pharma and tech companies. I am convinced that this virus is a bio-weapon which has been unleashed upon the world."

Stating that we are transforming into a 'totalitarian-surveillance-fascist' society, he further said, "When people wearing the masks, they're in fact breathing back the CO2 captured within their masks, which will damage lungs and lead to infections. I personally find it very uncomfortable to wear masks." He also said that N95 masks are a 'sham' and compared it to the equivalent of a placebo effect. "If people feel they are safe wearing masks then please do. But others who don't feel comfortable, it shouldn't be forced upon them."

Next Story : Mumbai: When can we return to our parks, asks Mira Bhayandar locals