Shekhar Channe, on a visit to the city border during routine inspection, found a national permit lorry with high side walls and stopped to shockingly find a small vent in it and people stashed inside. 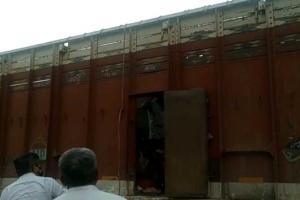 
Maharashtra Transport Commissioner Shekhar Channe on Thursday evening conducted a surprise visit to the RTO Thane border check-post and stopped vehicles ferrying migrants in trucks and arranged MSRTC buses for them. Thane RTO has been seeing the highest action against such illegal transport of migrants with them issuing memos to 250 vehicles in the past three days. So far 18,029 cases of migrants willing to travel have been transported in 805 MSRTC buses.

Channe, on a visit to the city border during a routine inspection, found a national permit lorry with high side walls and stopped to shockingly find a small vent in it and people stashed inside.

"We immediately took action against the lorry and arranged MSRTC buses for those who wanted to travel. In the past six days, over 1 lakh migrants have been transported in MSRTC buses across the state," Channe, who is also holding charge as vice chairman and managing director of MSRTC, said.

Speaking about action Thane RTO officials said the situation on the ground has been very challenging. "The surge in the crowd has significant and at times they even become violent. Even last midnight, we arranged 11 buses to send off migrants," Ravi Gaikwad Thane chief RTO officer said.