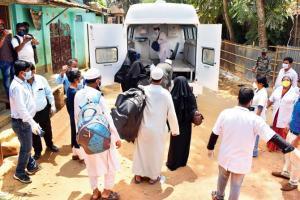 The five attendees of Tablighi Jamaat found in Dharavi have been quarantined. File pic


The Special Branch of the Mumbai police has intensified the search for about 50 people who attended the Tablighi Jamaat meet and haven't reported to the authorities despite several requests. So far, five members have been traced to Dharavi. An additional 50 of them have switched off their phones.

"Was it the job of the NSA or the Delhi police commissioner?" he asked. "What did Doval and Maulana Saad discuss at 2 am?" asked Deshmukh, in a questionnaire he sent to media persons on Wednesday.

Deshmukh said the state government has been trying its best to trace the Markaz attendees. "Out of the 1,350 attendees, quite a few are still unreachable," he said, even as he questioned the authority that allowed gathering to take place during the outbreak.

"Why did the Union home ministry allow it? There is a police station right behind the Tablighi headquarters where the congregation was held. Why didn't the police [which the home ministry controls] stop the meet?" he asked. Deshmukh said the Centre had given permission to Tablighi.

Fadnavis responds
Former chief minister Devendra Fadnavis said that by dragging Doval and the Centre into the issue, Deshmukh was diverting attention from the department's failure to track the Markaz attendees.

"Deshmukh should stop politicising the pandemic and instead focus on tracing the Tablighi members who might spread the infection further. He should stop appeasement politics and act firmly."

Cops intensify search
Continued from page 1 Apart from the 150 people, whose names were shared by Delhi, the Mumbai police have received a list of additional 100 people, out of whom close to 50 people have switched off their phones and are hiding. The home minister has warned of strict action if they don't cooperate.

"We are using human intelligence to track and quarantine them. In our continuous efforts, we found five members in Dharavi which is more alarming. They were staying in one room and all have been quarantined at a designated place and their samples have been taken" an officer told mid-day.