'I have nothing to do but pray hard'

Vakola woman, whose husband is admitted in a Miami hospital for Covid-19, worries for him as doctors put him on a ventilator 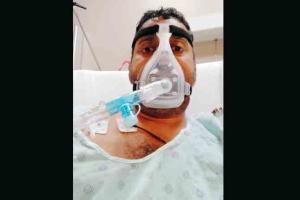 
Maria Fernandes and her four children have been hoping for a miracle ever since Maria's husband Andrew, 48, tested positive for Covid-19 and has been put on ventilator support in a hospital in Miami, Florida, USA.

Andrew, who hails from Mumbai, worked as an assistant security officer on board Costa Favolosa, one of the largest and oldest passenger cruise liners and had boarded the cruise from the Dominican Republic and was on a Caribbean cruise since February.

After a few passengers on the cruise tested positive for Covid-19, some crew members too began showing symptoms and Andrew was one of them, said Maria who resides in Vakola, Santacruz.

"He would speak to me regularly from the cruise until March 20 when he said that he was having a mild cough and fever. He said he had been examined by the cruise doctor and given medication," recalled Maria, adding that last week her husband told her the medicines weren't working for him and he had been asked to self-isolate in one of the cabins despite being tested negative for corona twice.

"He called again a day later when he could barely speak owing to the cough. He said that his colleague from Goa also showed similar symptoms and that he may be disembarked from the ship at Miami port soon," she added.

On Sunday (March 29), Andrew along with a few others was disembarked from the cruise by the US Coast Guard authorities and taken to Larkin Community Hospital in Miami where he tested positive.

From the hospital, "Andrew just told me to take care of myself, the kids and our mothers."

The doctors had to sedate him the next day and put him on ventilator support. "How am I not to worry? My children are too young [two four-year-olds and two nine-year-olds]. I have no clue about what is happening in the hospital since Monday. I have no option other than praying day and night," said an emotional Maria.

Andrew's elder sister Adelaide, who is in touch with the doctors at Larkin Community hospital, said that he had pneumonia and the lung is infected.

"They said he may need to be shifted to Jackson hospital in Miami. However, no bed was available there as of now. His cruise liner is currently coordinating everything." His other sister Rosy, however, expressed her grievance with the company. "Had the doctors on board the cruise taken his swab test, it could have helped."

Local former corporator Brian Miranda said, "Andrew has always maintained a low profile and is a soft-spoken person. We have assured the family of support and requested people to pray for his speedy recovery."