Not upset with the BJP and its central-state leadership, Eknath Khadse says; all set to join NCP on Friday 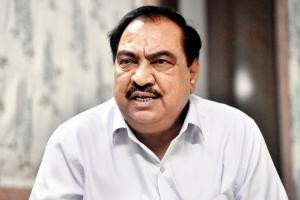 The socio-political strength Eknath Khadse wields will now shift to the NCP which has weakened its base in north Maharashtra. Pic/Pradeep Dhivar


Former Maharashtra minister and veteran Bharatiya Janata Party (BJP) leader Eknath Khadse quit the party on Wednesday and is all set to join the Nationalist Congress Party (NCP) on Friday. He blamed his exit on former chief minister and now opposition leader in the Assembly, Devendra Fadnavis.

Khadse has been estranged from the party since he was asked to quit the cabinet minister's office in 2016. He said he wasn't upset with the BJP, its central-state leadership, but quit only because of Fadnavis, who he said managed to seek his resignation even when no opposition party had demanded his ouster following charges of corruption. "Fadnavis also asked the Mumbai police to register a molestation case against me when an activist made false charges. When I asked him, he said that the woman was creating a ruckus and he would withdraw the case," said Khadse, who played a stellar role in making north Maharashtra a BJP stronghold. The socio-political strength Khadse wields will now shift to the NCP which has weakened its base in the region.

'Would have been jailed'

"My personal and political life had become miserable. I was acquitted of a molestation charge a fortnight ago. If not acquitted in this case, then, I could have gone to jail for three years, and lived with a stigma thicker than any corruption charge," he told media persons in Jalgaon after sending his resignation to state BJP president Chandrakant Patil. The BJP confirmed the resignation late Wednesday afternoon after state NCP president Jayant Patil announced Khadse's induction programme in Mumbai.

"My ministerial office was kept under surveillance for nine months. Many leaders who were accused of corruption were made ministers and protected. Later, similar people were given posts like opposition leaders. What contribution did these people make to build the BJP of today? I was among the leaders who worked day and night for 40 years. People spat on us then. I told in my last speeches that I was being forced out of the BJP. I told them that they were testing my patience," said Khadse, adding that it was painful for him to leave the party he was associated with for close to five decades.

mid-day had reported early this week that Khadse was likely to join the BJP in the auspicious period of Navratri. His daughter Rohini, whom the BJP gave an Assembly election nomination last year, will also join the NCP. According to Khadse, Rohini couldn't win because certain party leaders had worked against her. "I gave the party evidence of the leaders who worked for Rohini's defeat, but no action was taken because big people in the party supported our detractors," he said.

Member of the upper house?

After Jayant Patil announced Khadse's entry plan, the ruling Maha Vikas Aghadi (MVA) predicted that many more BJP leaders will switch over to them. Chief Minister Uddhav Thackeray welcomed Khadse into the MVA fold. Khadse is expected to be made a member of the upper house from the Governor's quota, said sources. He has been promised a ministerial berth.

BJP state chief spokesperson Keshav Upadhey said efforts were made to retain the senior leader. "It's always a sad moment when a leader or worker goes away. It seems Khadse had already made up his mind," he said, extending his best wishes to the leader.

'Someone has to be a villain'

Devendra Fadnavis said Khadse had spoken 'ardhasatya' (half truth). "If he had any complaint against me he should have approached the party high command. In such a situation, someone has to be made a villain, so Khadse made me one," he said in Aurangabad.

Fadnavis said the case Khadse mentioned was known to everyone and the media had reported it for three days. "I will not comment further on this."

He said the Jalgaon district will continue to be associated with the BJP despite Khadse's exit. "The BJP is a big party. It did not stop when someone went away, neither did it move in a certain direction when someone came in," he said, while describing Khadse's move as unfortunate.

CM Uddhav Thackeray said the BJP should introspect on why its foundation stones were coming loose even though it is at the top. "What's the point when your foundation stones crumble while you are reaching the top?" he asked, while mentioning the exit of NDA partners to the Shiv Sena and Shiromani Akali Dal. "I'm an old friend of the BJP and hence it is my responsibility to say this to them," he said.

Khadse's daughter-in-law, Raksha who is a second time MP from Raver, will not quit the BJP. "Raksha told me about her decision. There are many such families… Scindias, Vikhe Patils etc." he added. Sources said Raksha prefers to do her politics independently and may not totally follow her father in-law's instincts. However, her actions will depend on how the politics in her Raver Lok Sabha segment develops ahead of the 2024 general elections. So far, her candidature thrived on the BJP's network and Khadse senior's local influence. The two factors are now disjointed.