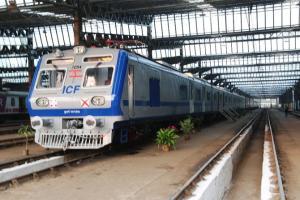 
It was chaos on the first-day, first-show of the air-conditioned train on the Trans Harbour line which had onboard hundreds of ticketless travellers thanks to peak hour rush and confusion.

The air-conditioned local also led to services on the route running extremely late and packed platforms at Thane and other stations on the line.

The AC train was delayed at every station because of problems with the automatic door closing. Officials were quoted in a report in this paper saying that overcrowding led to these problems. There was a slew of other problems all spiralling from the initial confusion because commuters did not buy the special AC train tickets.

Besides, there were delays throughout as the train's doors could not close because of the rush. Things did settle down in the evening though.

Air-conditioned trains are an exciting and welcome new facet to rail travel. We can only urge complete research and numerous trials to get everything spot-on. The Railways must work on the crowds preventing the door closure. Can the train be run during non-peak hours — at least initially?

Besides, ticketless travelling must be prevented. Railways cannot afford ticketless travellers or those with tickets of a lesser denomination. The system has to plug these loopholes. Not only does the Railways end up losing revenue, but it is also unfair to those who pay the full fare.

Trial runs and first days are expected to have their share of hurdles. It is how we identify mistakes and learn to rectify them and make the situation as close to ideal as possible. Commuters must respect the new service that the Railways has opened for them. Here is to the new air-conditioned locals. We hope they are the coolest ones.

Next Story : 'Pass resolution against CAA, we will move out,' say women protestors