These school kids are measuring the Earth's circumference

After a year of preparation, students at a Charni Road school along with children from 22 other countries conducted a two-hour experiment to first-hand calculate the Earth’s circumference: about 40,000 km 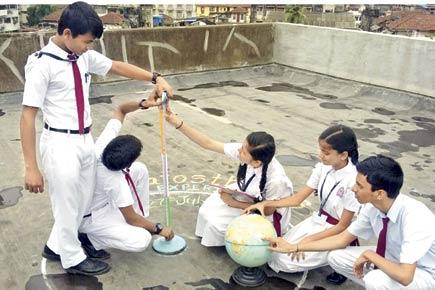 What is the Earth’s circumference? Ask any student at Marwari Vidyalaya High School, Girgaum, and they’ll happily tell you it’s approximately 40,000 km. For, after a year of preparation, the school participated in an international experiment spanning 23 countries to measure the girth of the planet on July 27. 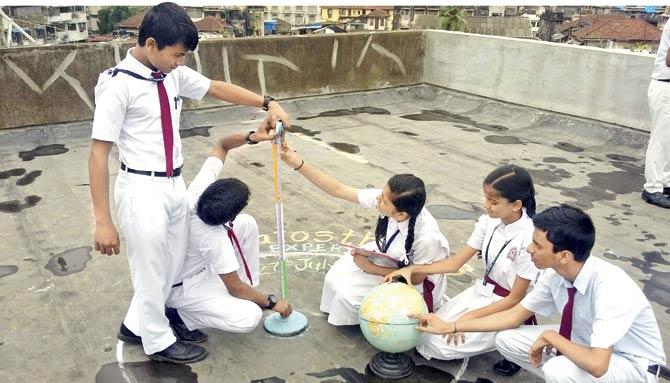 For two hours, the students took readings of the shadow cast by this stick and compared the observations with schools from across the globe to reach the final result

Called the Eratosthenes experiment, the study seeks to measure the Earth’s circumference with the help of mathematical equations. It is a reproduction of the observations of Greek scientist Eratosthenes, who was the
first to propose a method to measure the size of the planet.

Conducted by a French organisation, the aim of the project is to develop inquiry-based science education in primary and lower secondary schools across the globe. Marwari Vidyalaya was among the 47 schools that took part from across 23 countries.

A group of 16 students from Std V to X participated in the experiment, along with senior teachers and the administrator of the school, Deepak Patel. For two hours, they took regular readings of shadows cast by a vertical stick. They co-ordinated with students from other countries to calculate the final results.

“July 27 was a ‘no shadow noon day’ in Mumbai and, at 12:45 pm, anyone standing at this particular latitude in Mumbai (at Charni Road) wouldn’t have cast a shadow, because the sun was directly overhead.

We conducted the reading from 11 am to 1 pm on that day, and measured the shadow getting smaller with time to the point where there was no shadow at all,” said school co-ordinator Vishal Sawant. At the very same moment, students across the globe took similar readings.

Once the height of the shadow and its angle were measured, students from Mumbai and other countries shared their measurements and, with the help of geometrical equations, found the distance between the locations.

Once the experiment was complete, students were also encouraged to share the information with other classmates. “We all know the circumference of the Earth, but to find out how it is derived is more exciting.

I’m glad the students enjoyed participating in this project,” said Sawant, adding that it had taken a year to explain the mathematical and scientific concepts and process of the experiment to the students.