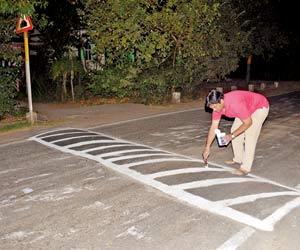 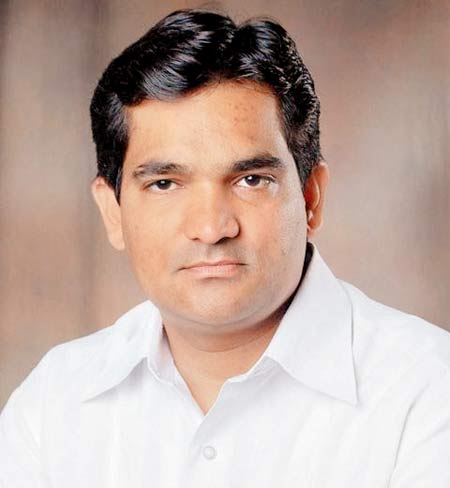 When the buck stopped nowhere, a resident of Wagholi village in Nalasopara decided to take matters into his own hands, literally - Sameer Vartak, a social worker, is spending from his own pocket to paint the highlighter strips on eight speed breakers on the 4-km stretch between Nirmal village (Wagholi) and Kalamb beach. Reason: to curb road accidents and save lives. "There is a huge flow of vehicles on this stretch having eight speed breakers. I have just begun the work; I plan to paint one every night," said Vartak, a former zilla parishad member who had painted the first one on Wednesday night. 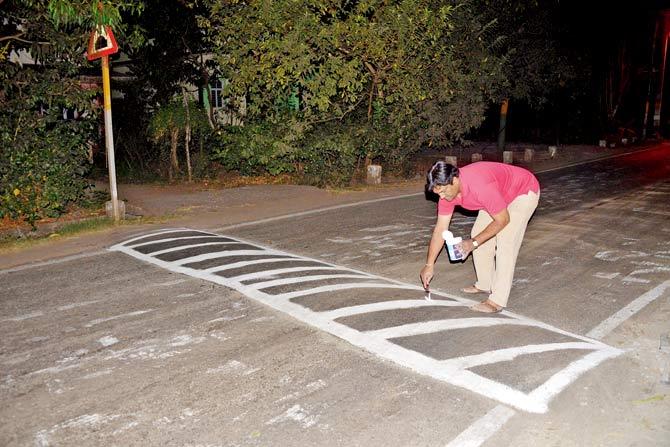 Deadly darkness
Vartak added that due to speeding and absence of streetlights in the area, dozens of people have lost their lives in road accidents on that stretch and hundreds have sustained serious injuries, many of them residents of Wagholi village. Residents said the area sees a lot of tourists, headed to Nirmal and Kalamb beaches, and as a result, the number of vehicles passing that stretch is high. Villagers added that they have witnessed two to three accidents in a single week many times. 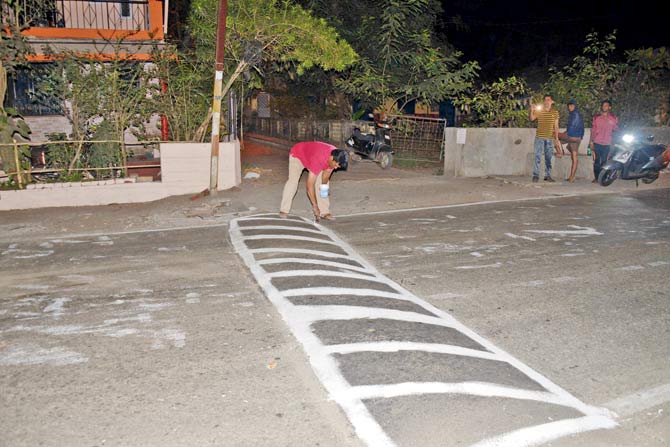 Sameer Vartak, who did the first speed breaker on Wednesday, has bought good quality paint with his own money

The first step
Vartak told mid-day, "Whenever there was an accident, locals would approach me for help. We would inform cops and rush the victims to hospital. Some have even died in my arms." Despite being accident-prone, the stretch got speed breakers only after villagers made noise in the zilla parishad office, demanding speed bumps on the stretch. As Vartak was a zilla parishad member, people complained to him; he took the complaints to the authorities concerned repeatedly over months, but in vain.

Finally, after repeated requests, the Public Works Department (PWD) woke up 20-odd days ago and built the speed breakers. But that, too, turned out to be a shoddy job - quality of the paint used for highlighter strips being poor, those faded in less than a week.

Vartak said, "We approached the authorities once again, telling them how the fading of the paint had rendered the speed breakers useless, but it all fell on deaf ears. I then decided not to wait for officials to realise their mistake, and bought the right paint with my own money and started the job." When contacted, deputy engineer of PWD Rajaram Jagdale said, "We will try and repaint the highlighter strips as early as possible." But it seems like by the time they get their act together, Vartak will have finished the work.

In January, data provided by the 108-ambulance service, Maharashtra Emergency Medical Services (MEMS) revealed that the number of emergency cases following road accidents has surged by 162 per cent since 2014, with Pune recording the highest number of cases and Mumbai at the third spot.