Watch video: Tallest fire ladder to be tested in Mumbai on Saturday

Newest, tallest feather in brigade’s cap -- its 90-metre ladder which can tackle fires in buildings as high as 30 storeys, will face its first test on Saturday, with a fire drill at 32-storey World Trade Centre 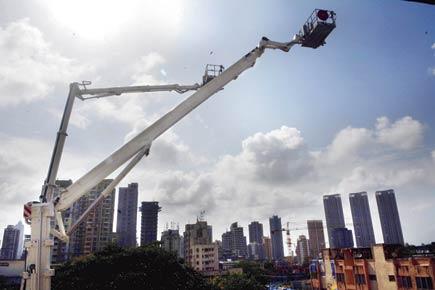 The newest, tallest feather in the Mumbai Fire Brigade’s cap -- its 90-metre ladder is about to face its first test on Saturday, when it will be put through a fire drill at the World Trade Centre to ascertain how it performs in a situation of that kind. 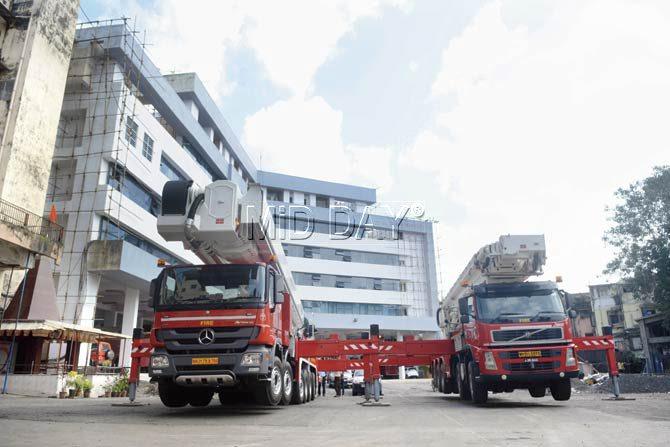 The new vehicle with the fire brigade’s tallest ladder and the one that held the record before. When the ladders reach their peak, they seem to be one with the sky. Pics/Atul Kamble

Ahead of this test, mid-day got to see the new ladder in action yesterday, alongside the Mumbai Fire Brigade’s previous tallest ladder. The raising of the ladders to their highest possible mark, equivalent to the heights of 30- and 22-storey buildings respectively, makes for a rather impressive sight (Watch the video on www.mid-day.com).

Manoeuvring the vehicle, which has a length of 16.5 metres (54 feet) and width of 2.55 metres (8.3 feet), in Mumbai’s narrow roads will pose a problem for the officials, however, and an engineer from Finland where the ladder was procured from — has been called in to train fire officials to operate it. 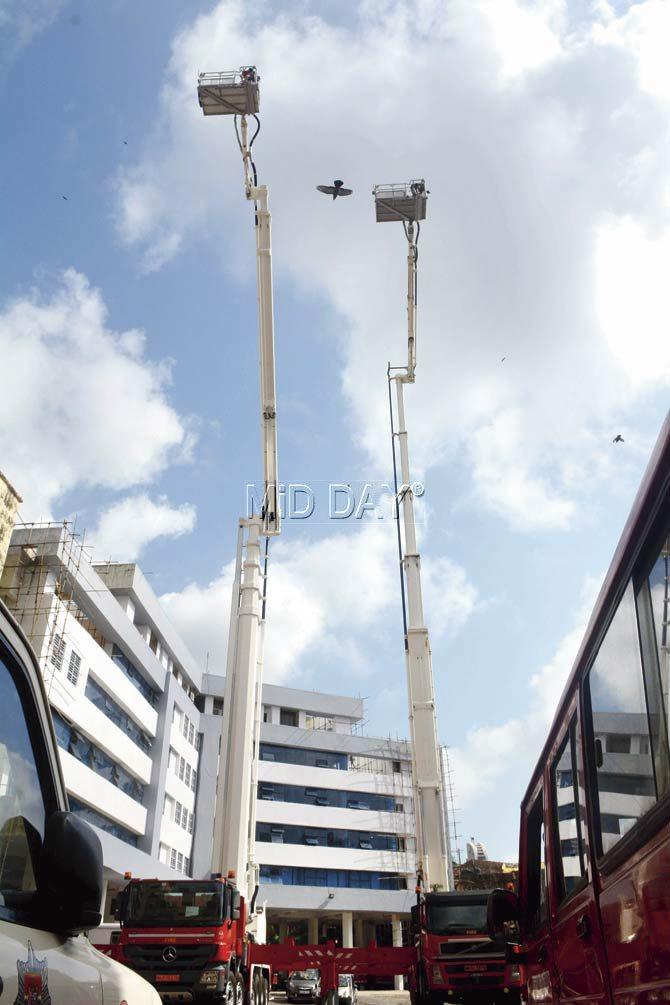 The training began on Monday and the test on Saturday will reveal how well the officials have imbibed the lessons. Municipal Commissioner Ajoy Mehta has also asked fire officials to prepare a proposal, to be sent to the state government, for sending seven officials from the brigade to Finland for one week of advanced training. 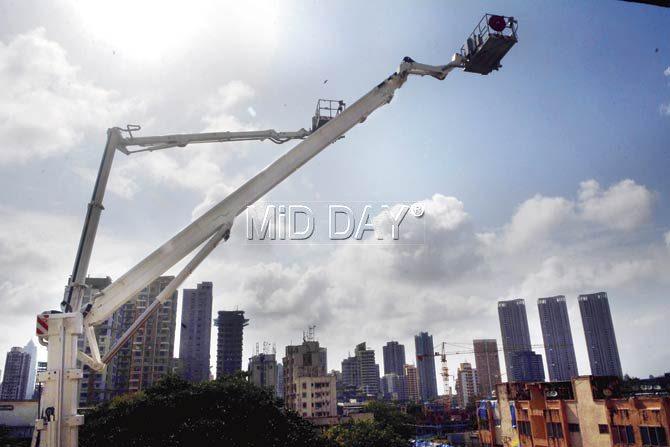 Keeping pace
The 90-metre ladder, manufactured by Bronto Skylift from Finland was inaugurated, along with the fire brigade’s new command centre in Byculla, by Shiv Sena chief Uddhav Thackeray and Municipal Commissioner Ajoy Mehta on Sunday.

It is a significant addition to the arsenal of the fire brigade, whose tallest ladder so far could reach a height of 70 metres (22 storeys). “The Mumbai Fire Brigade has had ladders in its service since 1974. As the city expanded and grew vertically, we kept adding equipment to handle the challenges of a metropolis.

Now, with high-rises mushrooming all over the city, a 90-metre ladder was considered essential to cater to buildings with more than 20 floors,” said R A Chaudhary, Assistant Divisional Fire Officer (Technical), who is in-charge of fire equipment.

Above and below
Since Monday, 12 officers and eight operators from the brigade are being trained to use the ladder by Bronto service engineer Jyrki Jantunen from Finland. Jantunen, who has been working with the Mumbai Fire Brigade since the 90s, ever since they began procuring fire equipment from his country, is training officials in the operations and maintenance of the ladder.

For example, in cases of drowning, lifeguards can be lowered to the surface of the water from a bridge and the drowning person can be pulled onto the ladder’s platform and brought safely back to land. “That is also one of its uses, but it is up to the fire brigade how to use it,” he said.

Challenge
“I think the biggest challenge for us is the length of the vehicle. We will have to mind its rear and be careful while turning. Other than that, the mechanism is more or less the same as that of the 70-metre ladder,” said Vijay Barge, operator and instructor, who will be operating the new ladder.

On Saturday, the trained officials will get to test their training. “It will be a confidence-building measure for our officials. So far, they have been training within the confines of the fire station.

Soon, they will learn how to manoeuvre the vehicle on city roads, learn where to park it to get the best strategic position and use the hoses during the drill. It will also instill confidence in citizens,” Chaudhari said.

Next Story : Cops puzzled by woman who waited outside Mumbai airport for 10 days