Alarmed over rising deaths, Raigad to keep register for trekkers

Those wanting to visit popular waterfalls, dams and forts will have to make an entry into the local forest department's register 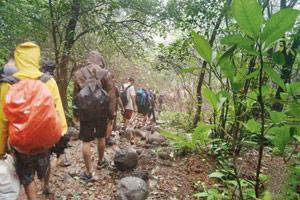 There have been several incidents of people getting injured or lost in forest areas during treks. Representational Image

Visitors thronging popular trekking spots in Raigad district will now have to register themselves with the administration before heading to the trail. Those wanting to visit popular waterfalls, dams and forts will have to make an entry into the local forest department's register.

Preemptive strike
The move is a result of authorities' alarm over the number of accidents happening at trekker- and tourist-frequented spots in the district — accidental deaths or people getting injured or lost in forest areas. The Raigad district administration has had a series of meetings with the police and forest authorities and arrived at this decision to curb mishaps.

"After a series of marathon meetings with different agencies, it was decided to maintain a register of people entering popular monsoon trekking spots in the region," Dr Vijay Suryavanshi, Raigad district collector, told mid-day. He clarified that the aim is not to intrude on anyone's privacy or engage in moral policing, and that the measure is merely precautionary, for citizens' safety.

An official attached to the disaster department said maintaining a register will help in better monitoring, especially in case of a mishap.

Risky outings
Every monsoon, popular trekking spots (waterfalls, dams and forts) in Raigad region see a huge number of visitors. Last year, two deaths were reported from Devkund waterfall and several cases of trekkers going missing too were recorded. "In the past, the police with the help of local villagers and members of disaster teams have rescued many people from the region," Suryavanshi said, adding, "To avoid such situations, we have made it mandatory for trekkers to take a local guide and enter their details in the register."

Prabalgad, Devkund waterfalls near Bhira village, Pandavkada, Kalawatin, and Plus valley are some of the spots preferred by Mumbaikars, but which turn dangerous during the monsoon.

The administration has also said it will impose restrictions on flow of traffic at some of these destinations, as they get crowded on weekends, and managing traffic and movement of public becomes difficult for the police and local authorities. Last year, to avoid traffic chaos, the Lonavala police had imposed a ban on entry, and in some places even parking, of four-wheelers in the area.