As malls gear up to open on August 5, BMC to decide on restaurants either today or tomorrow, as it thrashes out safeguards and restrictions with stakeholders 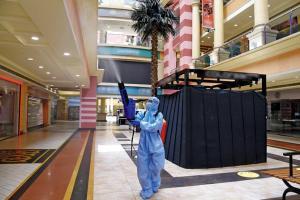 A worker in a PPE suit sprays disinfectant to sanitise Growel's 101 mall in Kandivli ahead of its reopening on August 5. Pic/Satej Shinde


After the green signal to malls, the state government and civic body are thinking about re-opening restaurants and a decision is likely this week. Continuing with the process of unlocking the city, given the high number of vacancies in the CCC1 and CCC2 facilities, the Brihanmumbai Municipal Corporation (BMC) has decided to return several such rented properties with a rider that they will be taken back, in case of a second wave of infections.

While malls have been allowed to open from August 5, restaurants located within their premises are still waiting for approvals. Civic officials said that a discussion with the state is likely to take place either on Monday or Tuesday. Suresh Kakani, additional municipal commissioner said, "The decision of whether to allow restaurants to open or not will be taken in the coming week and we will discuss the restrictions that would be required. The decision will apply to standalone restaurants as well as those within the malls." 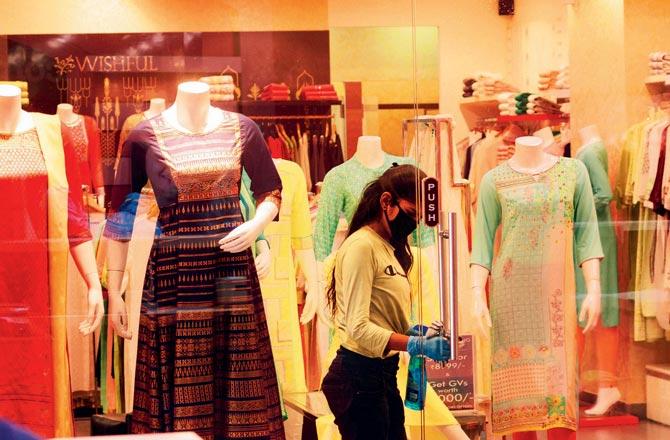 A salesperson wearing a mask, cleans the glass door of a store ahead of Growel's 101 mall's reopening on August 5. Pic/Satej Shinde

Shivanand Shetty, president of AHAR, the Indian Hotels and Restaurants Association, said that it was about time restaurants were allowed to be open.

"We can't remain closed any longer and we hope that there won't be a cap on the number of customers we can have. Our customers' safety is a priority and we will follow all the SOPs. However, we are concerned that once restaurants are allowed to open, there will be a rush of inspections, which will only lead to harassment," said Shetty. He added that given the steep rents of commercial property and shortage of staff, at least 50 per cent of the restaurants will not be able to re-open unless they own the property.

Proposal on private properties
A proposal on returning private properties that were rented to be COVID Care Centres has been submitted to civic chief, Iqbal Singh Chahal, on July 31. The order is expected to be enforced from Monday. These properties include hotels, lodges, schools, colleges and marriage halls.
According to the proposal, since cases in the slums have dropped significantly, so has the requirement of CCC1 for high-risk contacts and CCC2 for asymptomatic positive COVID-19 patients.

"We will try to utilise the jumbo facilities as much as possible. Since many beds are vacant in CCC1 and CCC2, there is no point holding those properties. We will de-requisition these properties and allow the owners to run their normal business once again. However, they will be returned with a rider. We will keep them as a buffer and if there is another spike in cases then we will use them again," said Kakani. He added that the civic body will give the owners 10-15 days time to vacate if the properties need to be used as CCC facilities again.

Taking stock of the expenses made to deal with the pandemic, barring the properties, the proposal also stated that zonal deputy municipal commissioners (DMC) will be asked to review resources like manpower, vehicles and ambulances and discontinue those that aren't needed. The proposal also encouraged COVID testing of high-risk contacts to be done through municipal laboratories instead of private labs. The DMCs have also been asked to keep a close eye on COVID expenses.

62
No. of active CCC1 facilities

35
No. of active CCC2 facilities

What the numbers show

. As of July 30, while 235 properties that were being used as CCC1 facilities have already been discontinued, in the 62 active CCC1 facilities, out of 24,377 beds, 4,739 beds are occupied. Around 22 properties have been marked as buffer, and in them, only 34 of 2,472 beds are occupied. The civic officials have also set aside eight properties with a capacity of nearly 3,000 beds that will be de-requisitioned this week and are currently occupied by around 580 people. These CCC1 are no longer admitting new high-risk contacts.

. Similarly, in CCC2 facilities, 117 properties have been discontinued and in the 35 active facilities, there are nearly 6,000 beds and of them, only around 1,900 are occupied by positive asymptomatic patients. The 17 properties marked as buffer with a capacity of 2,812 beds are occupied by only 14 people. Four properties with a capacity of 410 beds have been set aside where no new patients are being admitted and only 75 patients are currently being kept.