Dindoshi police say waiting for written plaint from BMC to file an FIR, society says actor irresponsible, arrogant in leaving without informing them 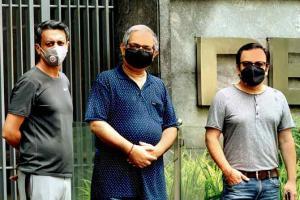 The society has alleged that Laghate, who had contracted COVID-19, left for Pune right after a negative test, leaving behind his help who is infected too. They submitted a complaint with the BMC and Dindoshi police on Tuesday.

According to the complaint, the actor tested positive on July 13, and four days later, his cook, Sunil Sahu, 30, did. On July 21, Laghate tested negative but Sahu tested positive, which Laghate did not inform the society of.

Ashish Saraf, the society's secretary said, "We came to know that a resident in our society tested positive from his post on social media. We have formed a COVID-19 committee and set up an isolation facility in our society. He should have informed neighbours and the society," said Saraf. Society members alleged that Laghate started stepping out after testing negative even though the BMC had sealed his floor. "The BMC's had sealed the section till July 31. Laghate was asked not to move out of his flat. However, he went out on July 27 evening and returned early the next day," said Saraf, adding that it was irresponsible of him to leave his unwell house help. "He was arrogant and said he had to leave for Pune for some work. He later said he left as he had a panic attack. We have doctors and he could have reached out for help," Saraf said.

Society would have helped

Resident, Yuvraj Mehta, said, "We have senior citizens, children who use the same lift. Had Laghate informed the society, they would have helped him," he said. The society's committee is helping Sahu with the delivery of supplies. Sahu said he has no symptoms and is eager to go home to Pune. "I am fine and I don't understand why my COVID-19 report is positive. I have another test this weekend. After that I will go to my family,"he said.

An official from P South ward said that since there was another COVID-19 patient in the house, Laghate was not allowed to leave. Dindoshi police's Senior Inspector, Dharmendra Kamble, said, "We have got in touch with BMC and are waiting for them to give a written complaint after which we will register an FIR against Laghate." Laghate could not be reached for comment.