'Residents aimlessly roam on streets, many without masks' 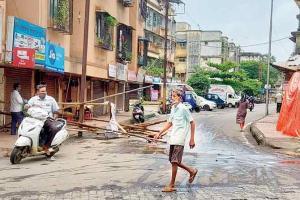 
The Vasai Virar City Municipal Corporation (VVCMC) has witnessed a six-fold rise in COVID-19 infections in just 40 days, thanks to the blatant violation of the lockdown measures by the residents living in the containment zones. The cases in the city jumped to 11,834 on Thursday, July 30, from 1,845 on June 20. While civic officials claim that most of the CZs are not manned by cops, police say they have deployed personnel at the sealed areas.

THE containment zones (CZs) in the Vasai-Nalasopara-Virar stretch has increased to nearly 1,500, including 26 big areas. On Thursday, the VVCMC reported 189 new confirmed cases of COVID-19, which took the total count to 11,834, and with three new casualties, the death toll reached 242. There are 3,834 active patients in the area as of now, the civic body said.

mid-day visited the area on Thursday and saw the residents roaming on the streets. Motorists were seen removing the barricades to go out of a sealed area. Manali Shinde, the assistant municipal commissioner of D-Ward, Nalasopara East, told mid-day that 10 days ago, she wrote to the Tulinj police for force deployment in the CZs to restrict people's movement, but hasn't received any response yet.

"There are 15 small and 14 big CZs in Nalasopara East... Police were stationed at the CZs earlier, but as the COVID-19 cases increased, a few policemen also tested positive. It is also possible that now the police department is understaffed," Shinde said. "It is also the public's prime duty to cooperate with the authorities during a health crisis".

Vasai West residents complained that due to absence of police, vegetable vendors have also returned to the footpaths near the sealed buildings. Pravin Nalawade, a resident of Samta Nagar [H ward]. 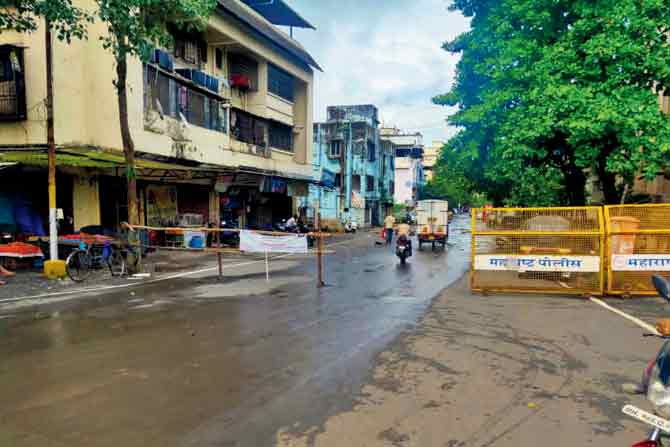 "Every day, vegetable vendors. occupy the lanes that are hardly 10 metres away from the buildings. Neither police nor civic teams come here to check. The lackadaisical attitude of the authorities is leading to the rise of the cases in Vasai, Virar and Nalasopara areas."

However, Assistant Municipal Commissioner Gilsen Gonsalvis, H ward [Navghar Manikpur], said they have been regularly cracking down on the vendors. "There are 145 small CZs in my area and all are housing societies. After the lockdown, we have slapped fine on illegal vegetable vendors, and have collected R2.25 lakh till Wednesday."

mid-day team also spotted residents and food delivery agents coming in and out of M B Estate in Virar West, which was sealed after a few people tested positive for COVID-19. Like many other CZs in the VVCMC, police were not deployed here as well.

But, Additional Superintendent of Police Vijayjant Sagar said police have been deployed in all the CZs. "There are 1,495 CZs in Vasai-Nalasopara-Virar, and 115 policemen and 51 home guards have been stationed at these places. We have deployed 27 policemen and 13 home guards at 26 of the 1,495 CZs, which are bigger areas. Rest are housing societies," Sagar told mid-day. 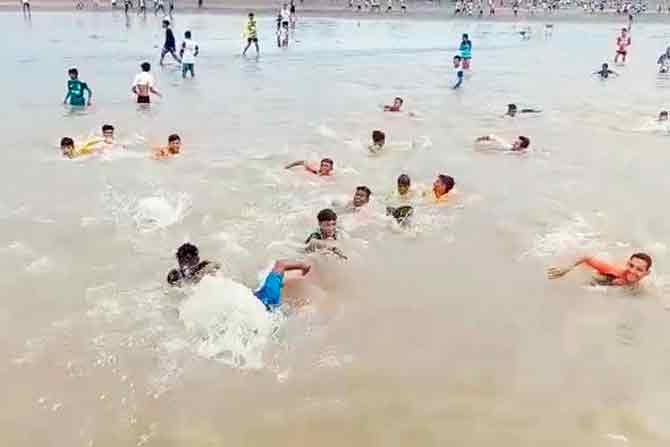 "If the sealed housing societies are next to each other, we deploy one policeman in the entire area. Also, senior police officers frequently visit the CZs to check if the deployed personnel are on duty or not. We have also been spreading awareness among the public to follow the lockdown norms, with the help of civic teams," Sagar added.

Both the civic officials and doctors have also blamed the residents. "People are not ready to cooperate with us. They aimlessly wander on the streets, some even without masks," a civic doctor told mid-day. "Also, since offices in Mumbai have reopened and people are bound to go, they unfortunately become the carrier of the virus, and this is causing a bigger problem for us."

"It is dangerous to go to Mumbai at this time, but people are not ready to follow the norms. About 10 days ago, a woman went to a hospital in Mumbai for her seven-month-old child's surgery. This surgery could have been delayed, but both of them ended up contracting the virus. They are now in Nalasopara under our care. There are several such cases because people are not taking the virus seriously," the doctor added.

Another doctor said, Just a few days ago, several youngsters were playing cricket near the Arnala beach and when the police arrived, they jumped into the sea and hopped on a boat to evade police action. 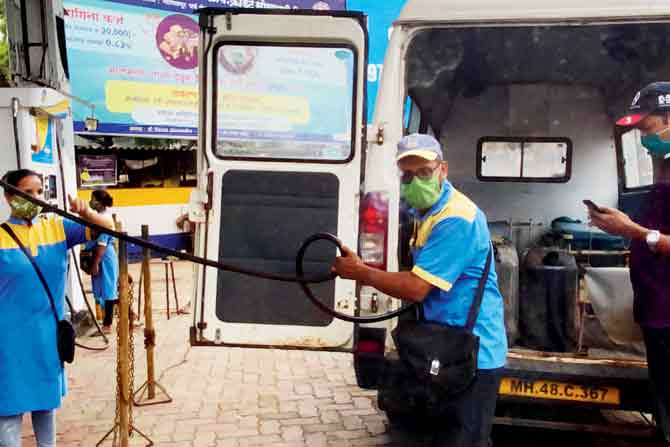 Amid complaints of non-availability of ambulances in Vasai-Virar, civic workers were seen loading 160 litres of diesel at Manikpur petrol pump for generators at a water pump station

Amid complaints of non-availability of ambulances in Vasai-Virar, mid-day on mid-day spotted a civic-run ambulance at Manikpur petrol pump, where the driver was loading about 160 litres of diesel in containers to deliver the fuel to run generators for water pumps in Vasai.

Ganesh Patil, public relations officers, VVCMC, said, "There are eight dedicated COVID hospitals along with 10 private hospitals where we are treating COVID-19 patients."