Does Eknath Shinde really have it in him to run Shiv Sena?

He may think he holds all the aces today, but the rebel leader—with a little over 30 confirmed turncoats—might not be able to run own entity 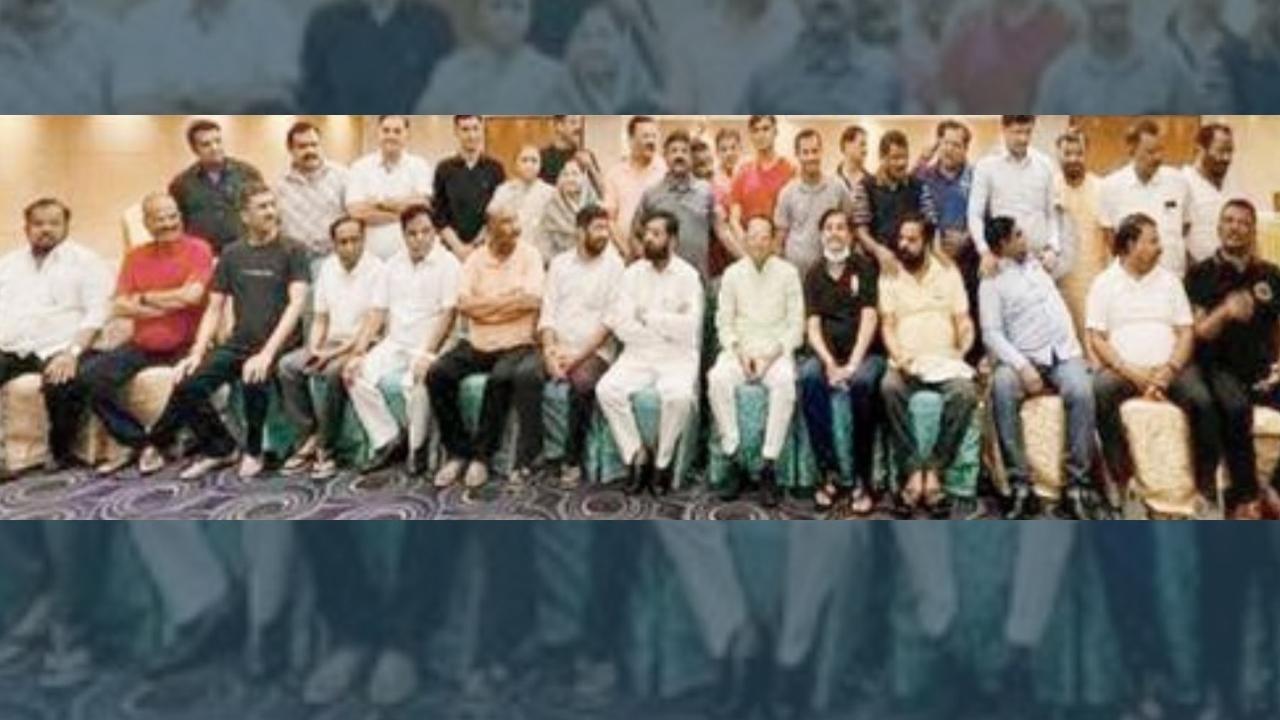 Shinde with rebel Sena and independent MLAs on Wednesday


Eknath Shinde’s rebellion on Wednesday seemed to be going closer to the magic figure for forming a separate group in the Assembly. The Sena leader claimed he enjoyed the support of 46 MLAs, the party’s official ones and independents, and submitted a letter signed by 34 to the Assembly staking claim to the group leader and whip’s positions. Even if it seemed Shinde held all the aces, sources said, the rebel leader might not be able to run his own entity with a few turncoats. CM Uddhav Thackeray’s faction submitted a letter signed by 22 MLAs to appoint its own leader.

It was evident that Shinde, holed up in Guwahati with his supporters, was prepared to do what it takes to topple Thackeray, who made an emotional appeal to the rebels to tell him directly that they didn’t want in the CM’s office. But Shinde didn’t relent. In response to the CM, he tweeted that the Shiv Sena and party workers have suffered in the MVA government whereas most benefits went the NCP and Congress way. “It is a must to quit the unnatural alliance for the benefit of the state. The Sena was systematically cut to size in the past two and a half years,” he said.

Also read: MVA an 'unnatural alliance', Shiv Sena must walk out of it: Eknath Shinde

The letter the Shinde faction sent to the Deputy Speaker was very scathing in attack on the party leadership for befriending ideologically opposite Congress and NCP and ignoring corruption. It was evident that Shinde’s strong opinion on Thackeray’s departure from the ‘real’ Hindutva and its impact on their electoral prospects, the benefits of collaborating with like-minded parties (read the BJP) and a guarantee of relief and rehabilitation, attracted most MLAs to his side.

The letter had a similar strong expression. “There has been great dissatisfaction prevalent amongst the members of our party viz. Shiv Sena and our party cadre at large, on account of corruption in the government, administration regarding police posting, corruption by then Home Minister Mr Anil Deshmukh [who is in jail] and sitting minister Nawab Malik [who is also in jail for involvement with underworld don Dawood Ibrahim],” said the letter.

“Apart from the above reasons, our party cadre faced tremendous harassment and distress on political as well as personal grounds from the ideologically opposite parties, who are now part of the government and were using their office and power to undermine the base and foundation of our Shiv Sena cadre,” said the letter further.

The Shinde group recalled the Sena-BJP’s pre-poll alliance for the 2019 Maharashtra Assembly General Elections and blamed the MVA formation on Thackeray. “The parties sought the blessings of the voters for this Sena-BJP alliance which the voters accepted and voted in favor of alliance. After the results were out, the Sena severed its ties with the BJP and formed an alliance with the opposing parties which they had fought against. This act of our party leaders had a tremendous negative impact upon the voters and the party cadre at large. There was a continuous hue and cry towards the party leadership for the act of aligning with the opposing parties, ignoring this, the party leadership went ahead and formed the Maha Vikas Aghadi government.” 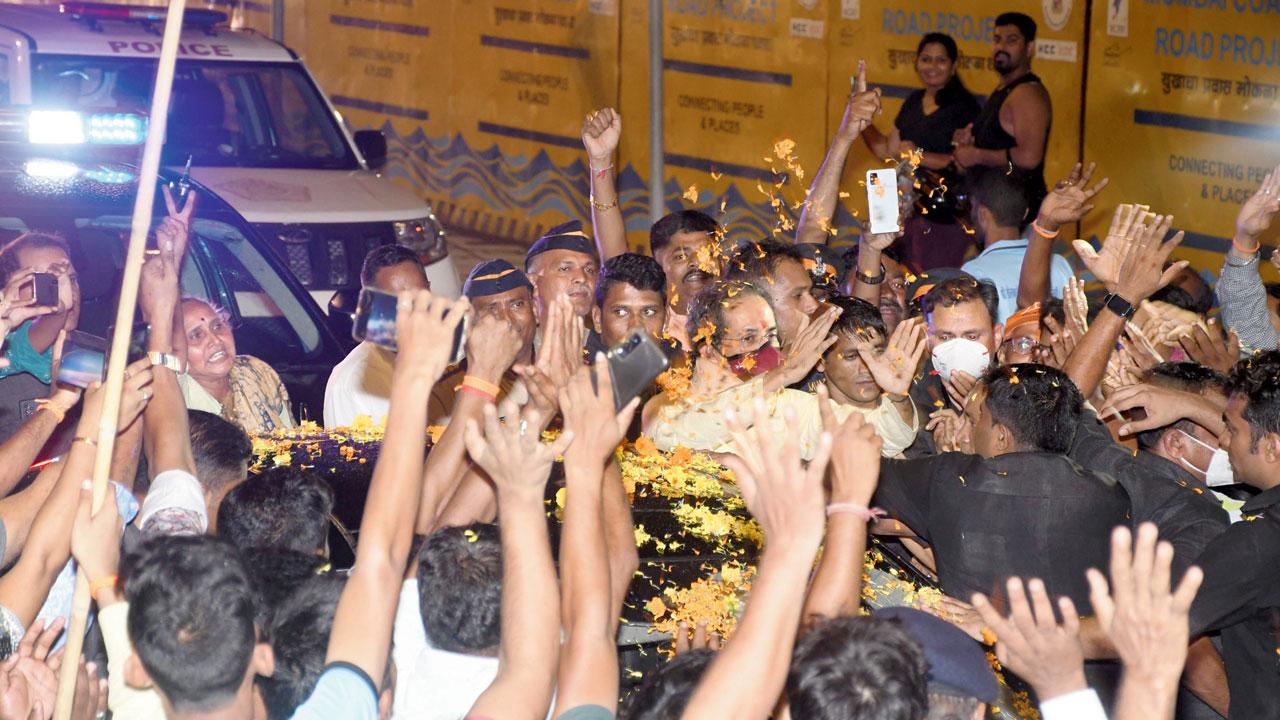 It said the Sena MLAs and party leaders have been facing tremendous pressure from their electorates/voters. “We have faced humiliating questions from our voters on account of our support to the opposition. Our leader Shri Balasaheb Thackeray was always a strong nationalist. We have also been subjected to a lot of criticism for being part of the corrupt government,” the letter added.

Not just the MLAs in Guwahati, but the neutral ones have also seconded Shinde’s sentiments. Deepak Kesarkar said he always wanted the Sena and BJP together. “I had tried my best to make things possible.”

A senior minister, Gulabrao Patil, who is very popular among the party for his oratory and campaign skills, reached Guwahati on Wednesday with some MLAs. Sources said some MLAs from Mumbai were willing to join the Shinde faction. Mumbai MLAs Sada Sarvankar and Mangesh Kudalkar went incommunicado on Wednesday evening. Some MPs are accompanying the rebels and a few more are expected to be with him soon. Patil’s ministerial colleagues Shabhuraje Desai, Abdul Sattar and Bacchu Kadu were among those who left on Monday night to Surat from where all MLAs were airlifted late Tuesday night to Guwahati.

Shinde’s driving engine, the BJP, has been keeping its decibels low, but hyperactive in providing all support to Shinde to succeed in the coup. A couple of state MLAs and leaders were in Surat till Tuesday and later shifted to Guwahati. The Assam government and the state BJP are reported to be playing host to the guests from Maharashtra.

Bigger than past revolts

If Shinde succeeds, it will be the biggest ever revolt in the Sena camp. Some parallels can be drawn between his and Sharad Pawar’s 1978 rebellion. A sitting minister, Pawar, only 38 years then, split the Congress (Urs) and formed his own party which made a government with the Janata Party and PWP. He became the youngest Maharashtra CM, the record is still unbroken.

Before Shinde, Chhagan Bhujbal successfully attempted a split in 1991 and Narayan Rane repeated the feat, but the number of MLAs they took away was much less than Shinde’s count. Raj Thackeray formed his own party and won 13 MLAs in his first attempt. On all occasions, the Sena was not in power. This time around, the party head’s fate is in the hands of the people who made him the chief minister.