Rubbishing all the absurd charges of the drug police, Bombay High Court grants bail to Chakraborty, saying she is not a drug peddler 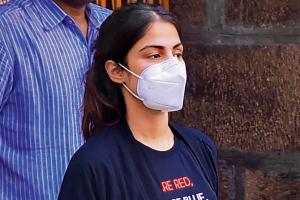 
Actor Rhea Chakraborty was released from Byculla women's jail after almost a month as the Bombay High Court granted her conditional bail on Wednesday. While accepting her bail plea, the court rejected NCB's theory that she was part of a drug syndicate. The court in its detailed order has said that section 27A, which is the most stringent section of NDPS Act, was not applicable in Rhea's case. However, it rejected her brother Showik's bail plea and said that he might be part of a larger scheme of things.

Along with Rhea's, the bail applications of Sushant's house help Deepesh Sawant and house manager Samuel Miranda were also accepted by the court. The court in its detailed order has said that section 27A, which is the most stringent section of NDPS Act, was not applicable in Rhea's case.

The court order further states, "It is necessary for the investigating agency to show that her activities involved commercial quantity of a narcotic drug or psychotropic substance. The investigation did not reveal any recovery. In that case, there is nothing at this stage to show that Rhea had committed any offence involving commercial quantity of contraband. The court is satisfied that there are reasonable grounds for believing that Rhea is not guilty of any offence punishable under sections 19, 24 or 27A. She is not part of the chain of drug dealers and has not forwarded the drugs allegedly procured by her to somebody else to earn monetary or other benefits." 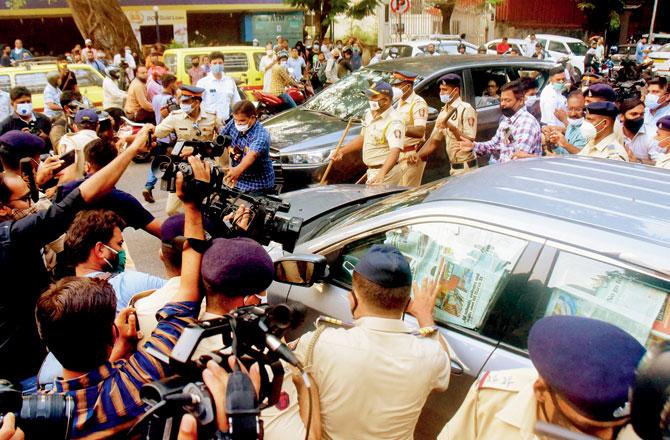 As Rhea left Byculla jail on Wednesday, the media was not allowed to take photos or videos of her outside. Her car windows were also covered with newspaper. Pic/Bipin Kokate

Not agreeing with Additional Solicitor General Anil Singh, who said in his submission that celebrities should be treated harshly so that it sets an example for the young generation, Justice Sarang Kotwal said in the order, "I do not agree. Everybody is equal before the law. No celebrity or role model enjoys any special privilege before the court of law and also does not incur any special liability while facing it."

The special NDPS court had said that if Rhea was granted bail, she might alert the other accused and they could tamper with evidence. To this the court said, "There is no basis for such observation. The agency didn't ask for her custody which means that it is satisfied with her interrogation."

Rejecting Showik's bail plea, the court said, "The applicant was facilitating procurement of drugs from one party to supply them to Sushant. He was clearly involved in illicit trafficking of drugs."

In his statement to the media, Rhea's lawyer Satish Maneshinde said, "We are delighted with the court order. Truth and justice prevailed and Justice Sarang V Kotwal accepted the submissions based on facts. Rhea's arrest was totally unwarranted. The hounding and witch-hunt by three central agencies should come to an end."

While granting bail, the court told Rhea to surrender her passport with the investigating agency and that she should not leave the country without permission of the special NDPS court.

For a period of six months, Rhea has been asked to visit the investigating agency on the first Monday of every month and after her release she should mark her presence at the nearest police station between 11am and 5 pm for the next 10 days.

Next Story : BMC divided over plot deal for special hospital