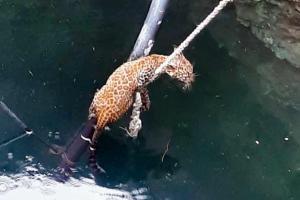 
After learning from their counterparts and an NGO that have reunited many lost leopard cubs with their mothers in Junnar, Forest Department (FD) officials are trying to repeat the feat in Nashik. After reuniting three leopard cubs with their mothers in the past few months, they are trying hard to reunite a female cub with its mother for three days.

The Nashik FD has learnt the process to reunite lost cubs with their mothers through FD officials in Ahmednagar and the NGO Wildlife SOS. On Saturday the FD received a call that a leopard cub had fallen into a well in Gajarwadi village in Niphad near Nashik. The five-month-old cub had fallen into the well of Prashant Pund who informed them.

Sanjay Bhandari, range forest officer, Yeola range told mid-day, "Our team saw the cub was sitting on a water pump. We released a plastic crate into the well with ropes and the cub entered it, after which we pulled it up."

The rescue operation went on for almost two hours after which the leopard cub was rushed to the rescue and rehabilitation centre, where it was examined. FD officials said the five-month-old female cub was fit and then started efforts to reunite it with its mother.

"In the past we have successfully reunited three leopard cubs with their mothers. We don't want cubs to spend their lives in cages, which is what happens if they are not reunited. For the past two days we have been keeping this cub in the area which a female leopard is frequenting, and we are hopeful that it will take the cub. My team member and forest guard Vijay Teknar, along with vanmajoor Bhaiya Shaikh, are taking a lot of efforts to reunite them. They are also using a set of camera traps to monitor the activity of the leopard near the location where the cub is kept," added Bhandari.