Former PMC bank MD, changed name to Junaid Khan, bought properties under the name, married his assistant in 2012 as per Islamic rituals 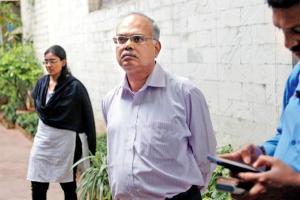 
Former MD of Punjab and Maharashtra Co-operative (PMC) Bank Joy Thomas married his assistant in 2012 under Islamic rituals and went by the name Junaid Khan, it has been revealed. Investigating agencies have found documents that suggest he had several investments under that name as well as that of his second wife.

Sources revealed exclusively to this paper that Joy Thomas had married his assistant as per Islamic rituals, since he couldn't have married a second time per the Hindu Marriage Act without divorcing his first wife. The first wife filed for divorce six months ago, the final hearing for which is scheduled for later this month.

These revelations were made even as two agencies—Economic Offence Wing (EOW) of Mumbai Police and Enforcement Directorate (ED)—are probing the PMC Bank scam. While investigating Thomas' investments, agencies found four flats in Mumbai and Thane registered under his and the first wife's name. They also discovered a café registered under the name of his son from the first marriage.

However, their search also revealed documents under the name of Junaid and a woman who wasn't his wife. "Later, we discovered it was his second wife," a source from the agency said.

Thomas' second wife is said to own nine flats in Pune and a boutique. The total value of the assets, which is yet to be ascertained. Sources estimate that the combined value could be around Rs 4-5 crore. The source also revealed that while the second wife resides in one of the flats, the remainder of the properties have been leased out.