Patel versus Patel, Kshtriyas placed against each other and fresh faces to woo voters, Jamnagar has a piece of cake for all in the forthcoming election 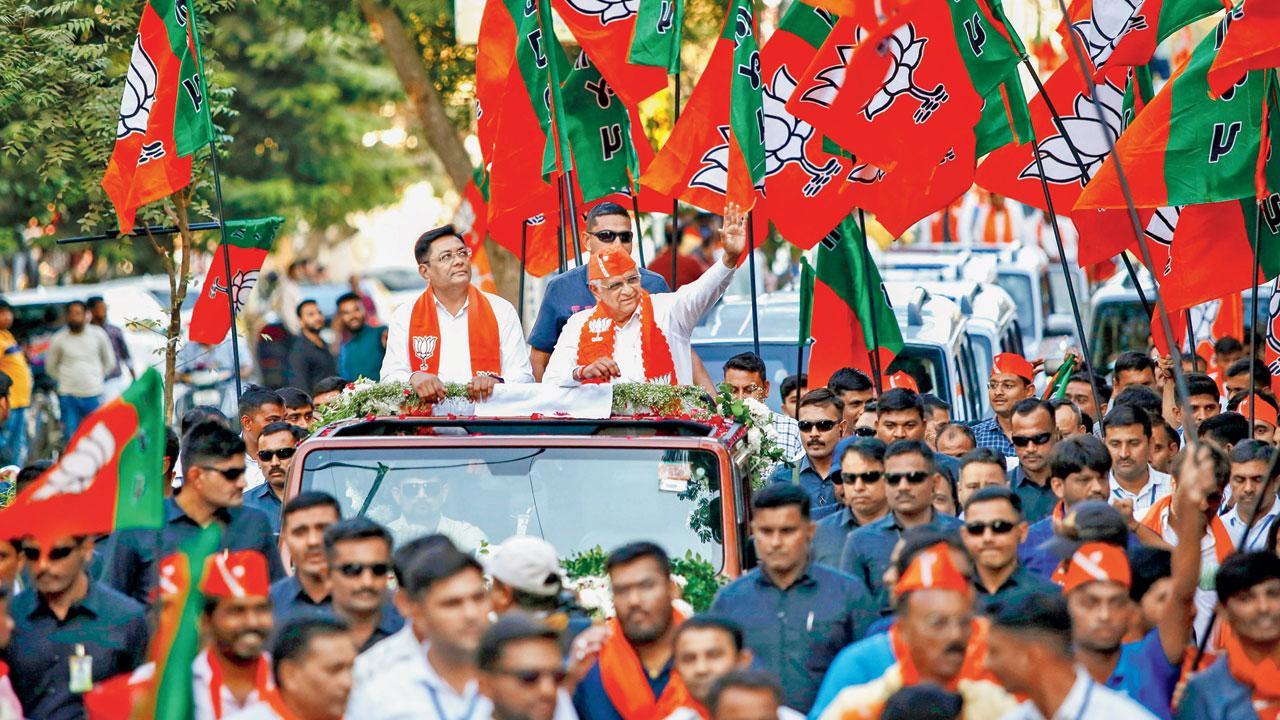 Gujarat CM Bhupendra Patel during a roadshow on Saturday. Pic/AP


Home to one of the world’s largest crude oil refinery, bandhani (tie-dying work), gold embroidery and metal ware, Jamnagar’s urban pockets have had BJP domination for long. The Congress, on the other hand, has enjoyed a favourable fate in the rural sections, also having bagged a city seat sometimes.

This time, the city’s north assembly constituency, is seeing a much hyped battle. Debutant Riva Jadeja faces two masters of their craft—Bipendrasinh Jadeja (Congress) and Karsanbhai Karmur (AAP), who had quit the BJP last year and now heads AAP’s city unit. What makes it even more interesting is that Bipendrasinh is also a fresh candidate when it comes to the clash of two Kshtriyas (him and Riva), who are opposed by an Ahir, Karmur. Though Karmur has been a corporator multiple times and ex-deputy mayor of Jamnagar, he lost the last municipal election as AAP candidate. Karmur has, however, set out to test his mettle in the bigger election again.

Belonging to a business family from Rajkot, Riva is looked upon as an outsider by opposition parties. Her sister-in-law, Naina Jadeja, actively campaigning for the Congress, keeping Riva a target, has only cropped up more questions of credibility. Riva not disbanding her maiden name “Solanki” even after marriage and that she is a novice imposed on the ground by the party high command, are some other charges levelled against her. Riva, however, is quick to dismiss the surname allegation as a mere technical gimmick of the Opposition and refuses to buy the novice tag, reasoning that there is a first time for everyone.

Political upheaval doesn’t end at this. Insiders say the former minister, Dharmendrasinh Jadeja aka Hakubha, was denied ticket for the seat he represented, because of Riva. Made in-charge of the three-city seats, sources say he isn’t enthusiastic about playing the trumpet for the young contestant. Hakuba’s rejection to the ticket came when the Gujarat high court refused to entertain his plea to withdraw criminal proceedings against him in a case for rioting. On the ground, however, Riva claims she has Hakuba’s full support and guidance.

A turncoat, Hakuba comes with a solid victory streak. He won the constituency in 2012 (Congress) and in 2017 (BJP). Insiders say the BJP has been trying to unite the two forces, under the watchful eyes of the high command. Who will have to bear responsibility if things go awry, is well known, they say. Riva’s husband, Ravindra’s humble family background and his cricketing career is also a talk of the town. The younger son of a security guard is the real hero for the city and Saurashtra. The wife’s entry into politics, and his support for her, has made him a sought-after star campaigner.

In Jamnagar (south), it’s Patel versus Patel for the first time. BJP has fielded Divyesh Akbari, with the task of winning the seat for the ninth time, instead of RC Faldu, a former agriculture minister and state BJP president. Akbari’s popularity, as a city corporator, has played a part in his candidature, says party colleague Dinesh Virani. “Akbari’s victory is certain because he the most active corporator and Faldu himself suggested his candidature to the party,” he says.

Patels dominate the constituency, claims Manish Kataria, standing committee chairman, Jamnagar Municipal Corporation. The Kacchi community that votes en mass for the BJP also plays a crucial role. Kataria is from the same community. Sources, however, say the BJP is worked-up about sharing Patel votes with the Congress.

Here AAP too has brought out a fresh face. Vishal Tyagi leads the party’s charge. His selection is caste neutral. He is a Sikh. Politicians toil hard, but it is business as usual for residents at Bhavanagaar’s Lakhota Lake, also known as Ranmal Talav. We reach a fast food cart and meet two childhood friends, a Hindu and a Muslim.

“All politicians are the same, but Modi is comparatively a better one. I will not vote for a candidate but for Modi,” says the Hindu friend, on condition of anonymity. The Muslim interjected and called out his friend for being a Modi-Bhakt. While we expected a verbal spat, both laughed it off saying, “This is how we are. Our political opinion differs, but not our friendship.”

Heated with election frenzy, PM Modi will also address a public rally some 10 km away from Jamnagar on Monday. Jamnagar district and its neighbouring Saurashtra are important for the BJP to increase its tally, after it lost some ground to Congress back in 2017.