Kashish hoists its flag once again 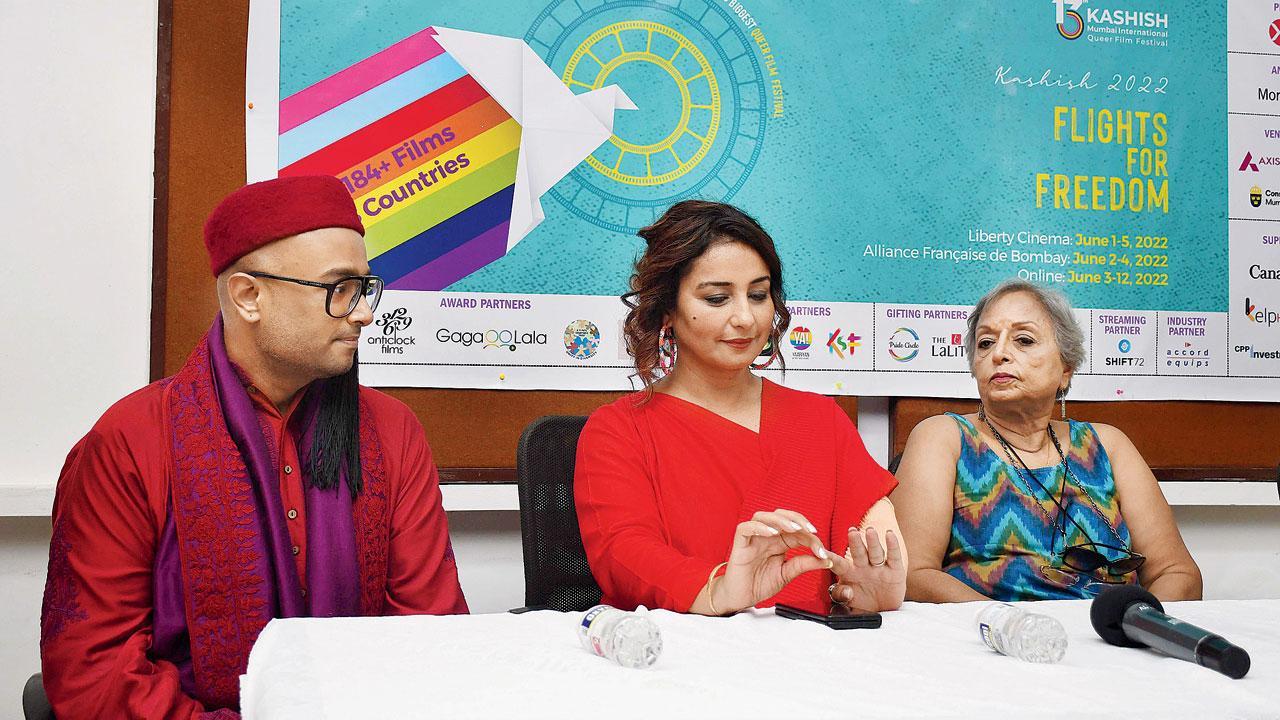 
Badhai Do and Sheer Qorma will lead a line-up of films at queer film festival Kashish 2022, kickstarting Pride month from June 1. The film festival is back in physical form after two years of the COVID-lockdown induced virtual viewing. It will screen around 194+ films from 53 countries at the Liberty Cinema from June 1 to 5, Alliance Française de Bombay from June 2 to 4 and online from June 3 to 12.

A press conference on Wednesday afternoon, with the director of the festival Sridhar Rangayan, filmmakers, actors and the jury hit an upbeat note with most speakers jubilant that the festival has returned in physical form. This will be the 13th edition of Kashish that will be up and rolling, putting the rainbow into June skies.

Indian LGBTQ+ films lead with the highest number of films at the festival, totalling 31 that include feature length narrative films, documentaries and short films. “To showcase all of them on the big screen at Liberty Cinema is a joy in itself. We are coming out of the pandemic lockdown with flying colours. It is important to have a physical space for the fest as this is a community building exercise, going beyond the narrow definition of a film festival. I see it as a synergetic space where the community and allies come together. Individuals have often fallen in love at Kashish,” stated Rangayan.

Arunaraje Patil director, said, “Kashish is a way of getting to people’s hearts because cinema connects people.” Divya Dutta who stars in the film Sheer Qorma said, “the cinematic medium is magical,” while Faraz Ansari director of Sheer Qorma put it succinctly as he proclaimed, “My film is a love letter to hate.”

The festival opens on June 1 with an Indian film titled Antharam in Malayalam and Tamil, about a transwoman’s journey of acceptance, played by real life transgender actress Negha. This will be followed by Badhai Do, starring Rajkummar Rao, Bhumi Pednekar and directed by Harshwardhan Kulkarni, and Sheer Qorma on June 4.  There is also a film about the transgender community in Kashmir and a first ever for Kashish, an LGBTQ film in Sanskrit.

At the conference on Wednesday, the narrative jury comprising Leena Yadav, Hardik Mehta and Sameera Iyengar said they witnessed that, “the films demonstrated complexity, they have evolved and gone far beyond the ‘just coming out’ focus of earlier. The characters have agency and rebellion, they are not just victims.” The documentary jury of Priti Chandriani, Ramanuj Dutta and Anjali Punjabi spoke about the great power of non-fiction films, “with their real-life characters and the struggles they portray that are so unique. The human connect is arresting and immediate.”

There were some thought provoking statements that though we celebrate Kashish, a time will come when LGBTQ will become completely mainstream, inclusivity will be complete when there will  be no need for a special queer film fest, these films will just screen like any other. Till then though, it is time to celebrate Kashish as, “we need to live in the box till we can break out of it,” the speakers said.