The announcement came on June 30 by Fadnavis himself, who first said he would stay away from the Cabinet but the BJP high command, including PM Narendra Modi, persuaded him to be Shinde’s deputy 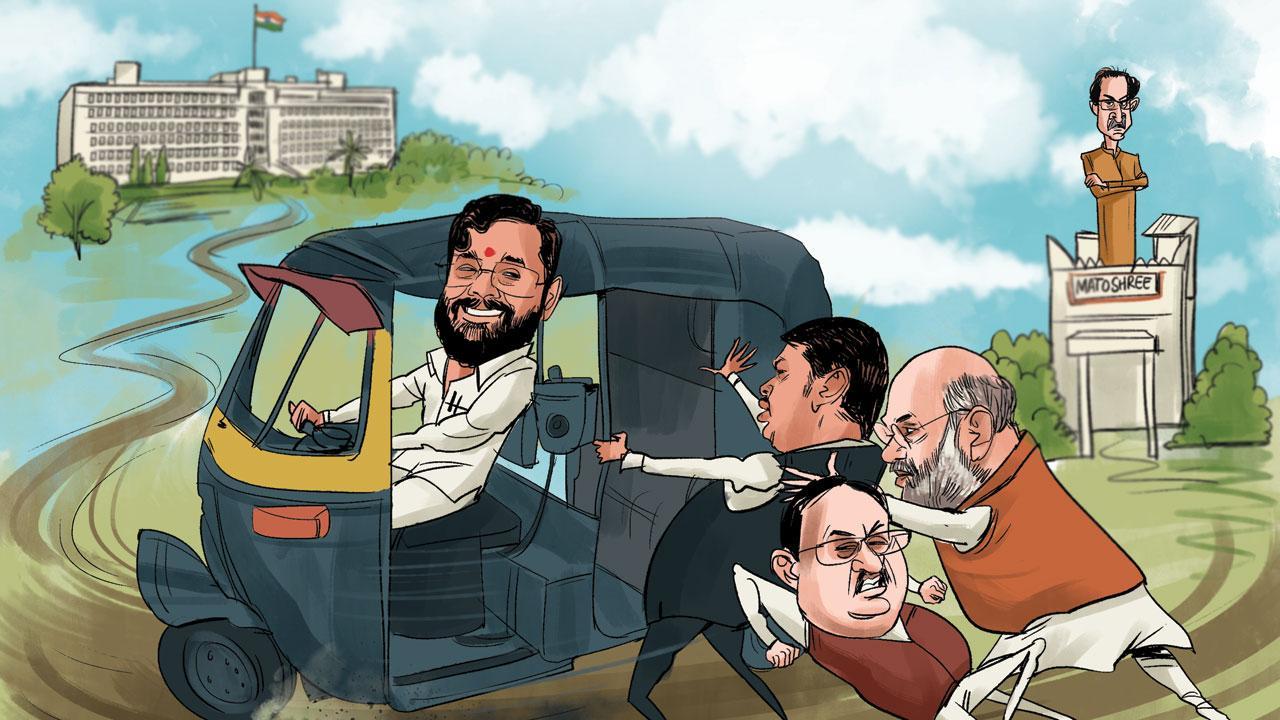 
When it looked almost certain that the BJP’s Devendra Fadnavis would lead the new Maharashtra government, the single largest party in the state came up with a dramatic twist by choosing Shiv Sena rebel leader Eknath Shinde as the chief minister. The announcement came on Thursday by Fadnavis himself, who first said he would stay away from the Cabinet but the BJP high command, including PM Narendra Modi, persuaded him to be Shinde’s deputy.

Fadnavis and Shinde met Governor Bhagat Singh Koshyari in the afternoon after the Sena rebel travelled from Goa to Mumbai. If Shinde’s coup was no less dramatic, the developments that unfolded in the second half of the day appeared like a chapter from an Agatha Christie suspense thriller.

As Fadnavis humbly refused to be a part of the government, BJP’s national president JP Nadda said in Delhi that the party’s Central Committee had asked Fadnavis to be in as the deputy chief minister. “Fadnavis has shown a big heart and character of a BJP worker who is not greedy for power,” he said. “It is my personal request as well as the party’s directive that he take charge of the DyCM’s post in the interest of the people of Maharashtra,” said Nadda. Sources said the PM called Fadnavis twice. 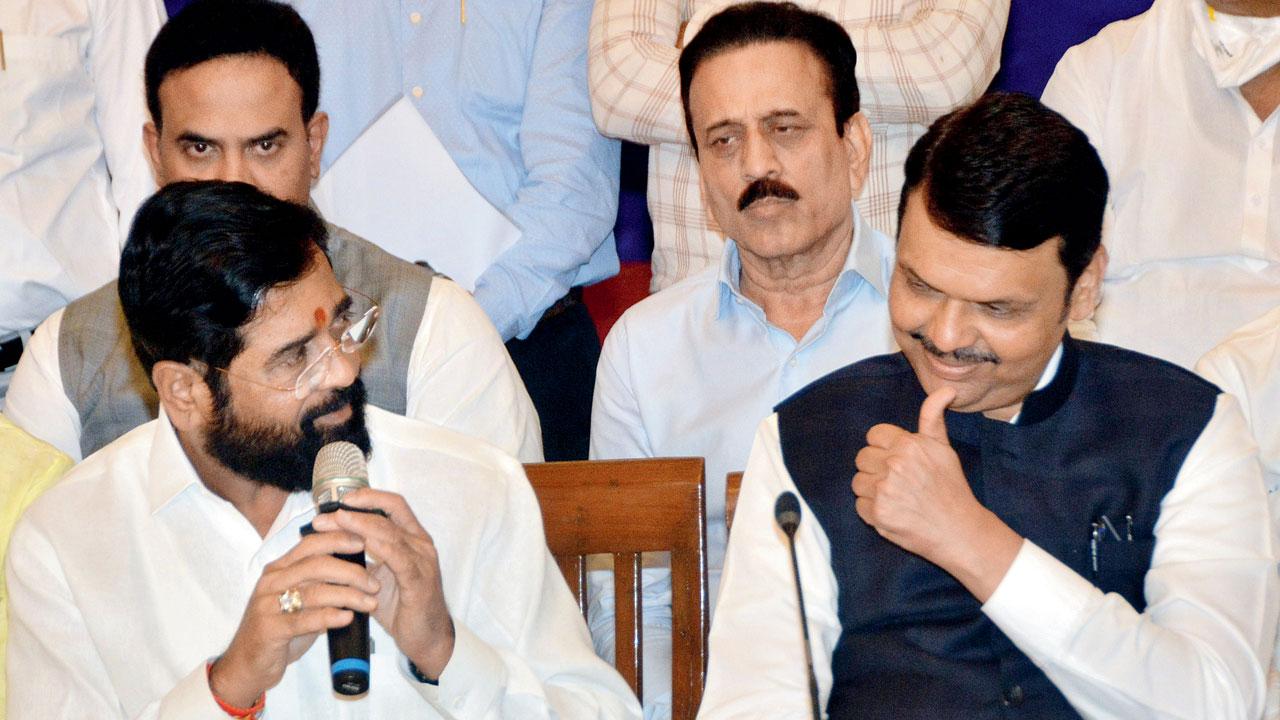 Devendra Fadnavis gives a thumbs up to Shinde after making the surprise announcement on Thursday. Pic/Sayyed Sameer Abedi

Immediately after Nadda’s statement, home minister Amit Shah, who has played an important role in Shinde’s coup, tweeted that Fadnavis had agreed to be the DyCM. Sources said Fadnavis wanted to lead the state unit, but the high command disagreed. “I follow the party’s directives as a sincere worker. To me, the party’s directive is above everything,” said Fadnavis in a social media statement shortly after agreeing to be the deputy chief minister.

PM Modi upped Fadnavis’s morale by acknowledging his leadership. “Congratulations to Shri @Dev_Fadnavis Ji on taking oath as Maharashtra Deputy CM. He is an inspiration for every BJP Karyakarta. His experience and expertise will be an asset for the Government. I am certain he will further strengthen Maharashtra’s growth trajectory,” he tweeted a minute after congratulating Shinde.

Fadnavis was the CM between 2014 and 2019. He had made a short-lived government in 2019 with NCP rebel Ajit Pawar. The Uddhav Thackeray-led Maha Vikas Aghadi government was formed later, which fell on Wednesday due to a rebellion in the Sena. 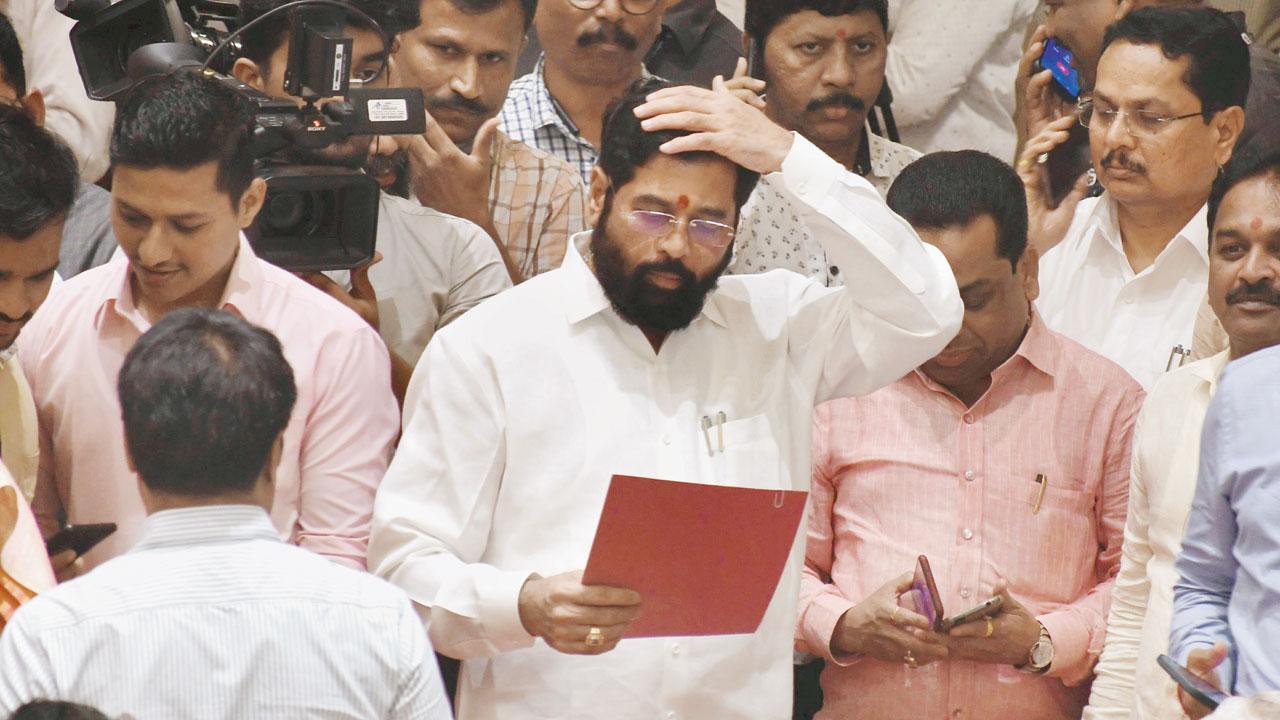 Eknath Shinde gets ready to take oath as the chief minister of Maharashtra, at Raj Bhavan on Thursday. Pic/Ashish Raje

Former urban development minister Shinde and ex-CM Fadnavis were sworn in the evening in the newly built Darbar Hall at Raj Bhavan that was recently inaugurated by PM Modi. Arrangements had to be altered at the last minute to accommodate Fadnavis on the deck.

While reading the oath of secrecy and office, Shinde, the 30th CM, invoked Sena founder the late Balasaheb Thackeray and his mentor the late Anand Dighe. Fadnavis took oath in the name of God. The council of ministers comprising the BJP, the Shinde Sena and others, will be sworn in later. The stakeholders will decide on the team in the days to come.

Earlier in the day, two-time CM Fadnavis said his party had promised to give an alternative government whenever the MVA fell. “We didn’t want to enforce mid-term polls,” he said, adding that Uddhav Thackeray continued to remain with the Congress and NCP despite a majority of MLAs being against the alliance.

“We are not after power, but want to be with the people who follow the late Balasaheb Thackeray’s Hindutva. We will ensure to undo what has happened in the MVA government which was highly corrupt and inactive. Under Shinde’s leadership, all stalled projects like Metro will get momentum and policy decisions to their logical end, be it the OBC leadership, Maratha reservation. Though I will not be in the Cabinet, it will also be my responsibility to support the government and its good work.”

I didn’t expect it: Shinde

Shinde said he was overwhelmed by the magnanimity of the single largest party and Fadnavis, who could have demanded the CM’s office. “I didn’t expect it, but the BJP has chosen me, a small Sainik of Balasaheb, to lead the state. I thank PM Narendra Modi ji, Amit Shah and Fadnavis, in particular, who showed a large heart.”

The new CM said it was a matter of introspection (for the Sena) when about 50 MLAs broke the ranks. “All our MLAs faced serious problems in their constituencies. Our agenda will be of development. We have taken an ideological position that we will take forward…”

Shinde said his government will be powerful and deliver as promised. “As of now, we have so many MLAs from the BJP, Sena [his group], independents and small parties. More will join us soon,” he said, assuring to live up to expectations. After taking oath, Shinde reiterated the agenda of development and justice for all sections of society. “Now, I also have Fadnavis ji with me. We all together will achieve all our goals.”

Like Bihar, the BJP chose to support a group much smaller than its strength in the Assembly.  The Nitish Kumar-BJP alliance has seen many ups and downs ever since. However, the parallels between the two states are not exactly the same. Here, the BJP has been fighting a regional party that shares the same ideology which posed a challenge by collaborating with the parties of opposite ideology.

Uddhav Thackeray’s Sena, which won a majority mandate in a pre-poll pact with the BJP, the Congress and the Nationalist Congress Party came together with the only purpose of keeping the BJP away from power in 2019. The Shinde group says the alliance damaged the Sena whereas the other two were able to rise from the ashes at the cost of its ally whose boss was made a CM, who ultimately fell to the unrest within his own rank.