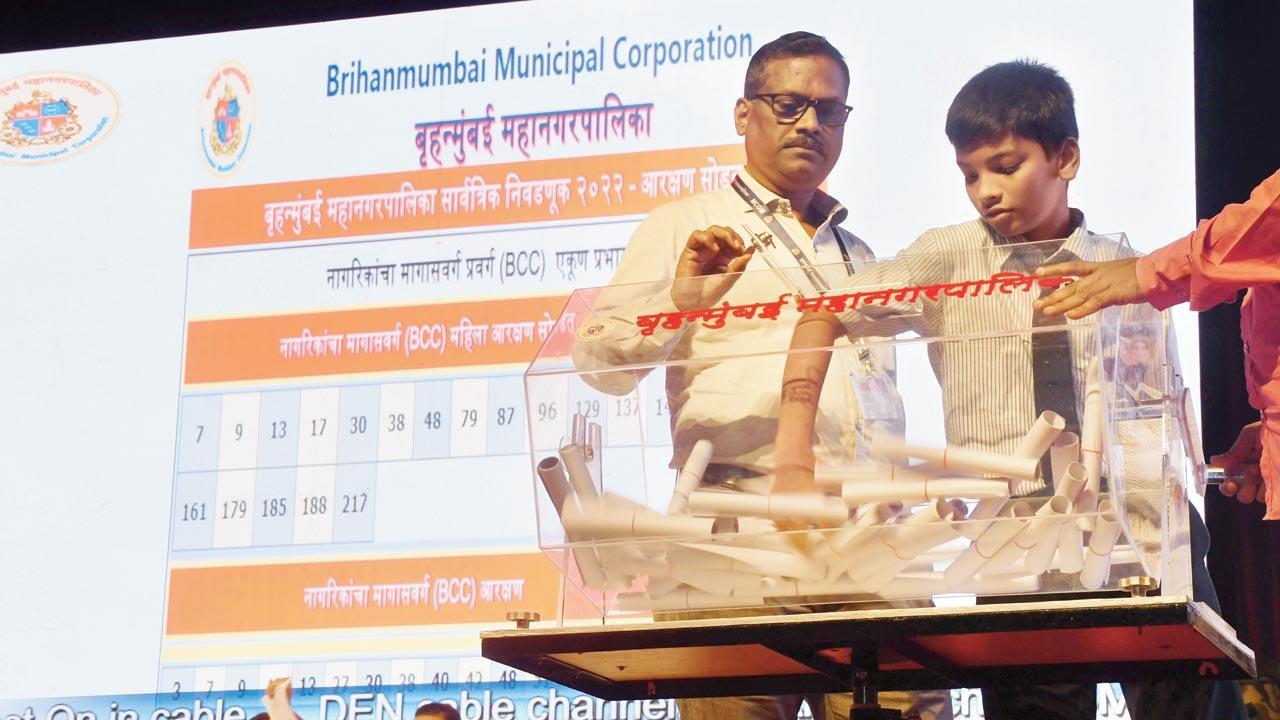 Reservation for BMC polls through lottery being done, at Bandra, on July 29. Pic/Ashish Raje


The cloud of uncertainties over the local body elections in the state has become denser, with an NCP leader from Pune moving the Supreme Court challenging the state government’s decision to go back to electoral wards finalised ahead of the 2017 polls. The petition has tied the hands of the State Election Commission (SEC), which is awaiting the decision of the SC before moving ahead.

After taking charge, the Eknath Shinde government reversed the decision of the MVA alliance tied to local body polls, effectively rendering the earlier election-related work useless. Now, the local bodies, including BMC, and the SEC will have to repeat a lot of processes further delaying the elections. Sources said the BMC has already spent R50 lakh on the poll work.

Also read: Mumbai: Quotas for BMC elections force many out of race

Demanding contempt action against the state government, NCP’s Prashant Jagtap said the SC had in July asked the SEC to notify the elections within two weeks. “Now, this government has decided to conduct the elections with the old formula and ward numbers which will cause more delay in the election. This is contempt of court,” said Jagtap.

Local body elections are pending in 16 municipal corporations including Mumbai, Navi Mumbai, Thane, Mira Bhayander, Kalyan Dombivli, 27 district councils, and 350 municipal councils. “This means around 9 crore voters in the state do not have their local representatives,” said Jagtap.

SEC officials said they are not starting the election process for now. “As the petition was filed in court, we are waiting for the court decision. We will start the further process as per SC order,” said UPS Madan, state election commissioner.

Explaining the factors that will eat up more time, an official said, “If the top court upholds the decision of the present government, the process to finalise voter lists will have to be repeated. Also, we need to conduct the reservation through lottery.”

An SEC official said, “Most corporations have to spend the same amount for the election process, which includes ward limitation, finalisation of the voter list and reservation through lottery.”

9cr
No. of voters in state without local representatives, as per petitioner