Revealed! Mumbai hospitals' darkest secret on family planning is out!

EXCLUSIVE >> A research article in international journal has obstetricians from govt-run hospitals in Mumbai confessing to coercing women into sterilisation after 2nd child; chillingly, so-called 'consent' is usually obtained when they are in labour 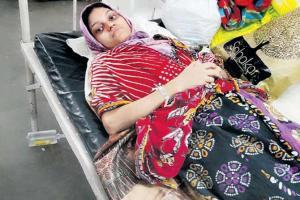 Deepa Kadam was allegedly pushed into tubal ligation in 2017


Are pregnant women being blackmailed into undergoing sterilisation even as they are in the throes of childbirth? That is what the Mumbai-based Centre for Studies in Ethics and Rights has alleged in an article published in an international journal last month. The article does not feature patient statistics to support the allegation but is a qualitative study that includes interviews with doctors and staffers from two government hospitals in the city.

The study, published in the Journal of Reproductive Health Matters, was conducted at a "tertiary-care teaching hospital attached to a government medical college, and a secondary-care hospital located in an extended suburban district of the Mumbai urban agglomeration".

Chilling confession
The report includes a chilling admission from one of the doctors, a senior resident at the tertiary-care teaching hospital: "What I have been told by my seniors, and what I tell my juniors, is that if the lady is in her active phase of labour, it is the best time to talk to her about TL [tubal ligation]. They are very receptive at that time. They understand what pain it is, how it is good to not have it once again (sic)."

Doctors allegedly threatened not to perform required procedures on the patient, or refused discharge or banned the patient from future treatment at the hospital unless they agreed to have their tubes tied. Typically, consent for the tubal ligation was negotiated when the women were at their most vulnerable — during labour.

Neha Madhiwalla, the principal researcher of the study, and coordinator of Centre for Studies in Ethics and Rights (CSER), Anusandhan Trust, said there is an unspoken code in these hospitals to push women to undergo tubal ligation after two deliveries, and IUD (intrauterine device) insertion after the first. However, there is no procedure to counsel the women about their options as per the rules of the central government's family planning department.

"In fact, the patients are often threatened with a ban from the hospital, or refused discharge if they refuse the surgical procedure. But no one asks the husbands to undergo vasectomy," said Madhiwalla.

In fact, as per data procured from the BMC's health department, the ratio of men and women undergoing birth control surgeries at civic-run hospitals is 1:23 (one man for every 23 women).

Patient recalls
mid-day reached out Kurla resident Deepa Kadam, who said she had been subjected to this ordeal twice at the same hospital. In 2013, when she went into labour with her second child, doctors at Nair hospital pushed her to opt for tubal ligation.

"From the second delivery onwards, they keep pestering pregnant women to undergo tubal ligation. When you are reeling under labour pain, trying to push a baby out, your brain doesn't work. You just want to get it over with, and many end up agreeing to the surgery," she said. At the time, it took all of her resolve to say no to the doctors, but when she returned to the hospital for an abortion in 2017, they refused to help her. It was only after she agreed to sterilisation that they terminated the pregnancy.

In another case, a 32-year-old from Sion was admitted at a civic-run hospital to give birth to her second child. Even as she was reeling from labour pain, the nurses coaxed her into having her tubes tied.

The other side
Idzes Angmo Kundan, additional municipal commissioner (health), denied the allegations and said, "Such activity doesn't happen in our hospitals. We may counsel pregnant women, but never force anyone into sterilisation."

Dr Sanjeev Kamble, director, Directorate of Health Services, said: "In government hospitals, no medical staffer forces anyone into it. Doctors and social workers from the hospitals talk to them and sensitise them about family planning and, with their consent, the surgery is performed."

Lack of doctors
The report also claims that the lack of senior doctors is putting patients' lives in danger. In some cases, junior doctors are forced to shift patients to tertiary hospitals, or nurses allegedly conduct vaginal deliveries. Last year, around 4,000 children died across hospitals in the city. Dr Avinash Supe, former dean of KEM hospital, said, "Almost 40% of the patients are referred from peripheral hospitals. And most of them come at the last stage of treatment, which increases mortality in these hospitals."