With the Oshiwara station set to be unveiled in a matter of months, the BJP and the Shiv Sena want it to be named Ram Mandir Station in recognition of a popular temple in the area 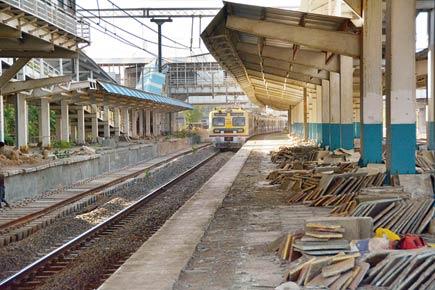 Pudchya station, Ram Mandir? For the last few months, the BJP and the Shiv Sena have been making concerted efforts to get the under-construction Oshiwara railway station, the first new station on the western line in over 50 years, renamed as Ram Mandir station in recognition of a popular temple in the area. 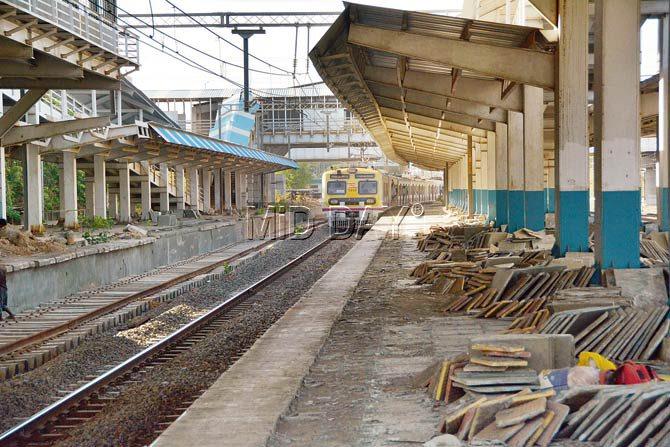 The Oshiwara station is expected to become operational this November. Pic/Sayyed Sameer Abedi

The station abuts Ram Mandir road, whereas Oshiwara, named after an eponymous river, is farther away. It is expected to become operational in November.

A hoarding, featuring minister of state Vidya Thakur, put up two weeks ago outside the Oshiwara station, which already rechristened the premises Ram Mandir railway station

Leaders from the two parties have even raised their demand with Railway Minister Suresh Prabhu and Home Minister Rajnath Singh, and have reportedly asked Chief Minister Devendra Fadanvis to follow up on it. 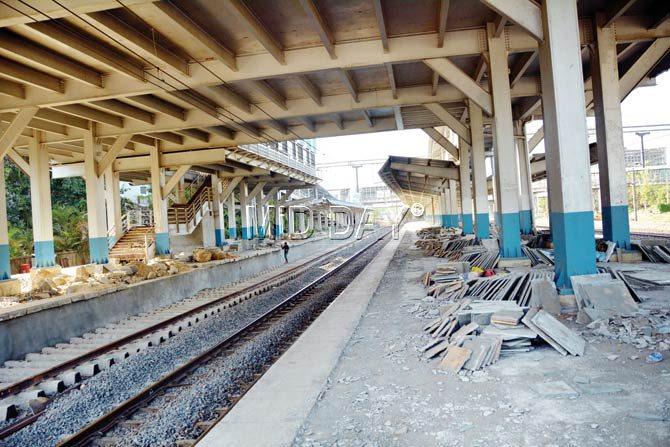 Two weeks ago, when Vidya Thakur, minister of state in the Fadanvis government and local MLA from Goregaon, who is leading the name change campaign along with Shiv Sena MP Gajanan Kirtikar, visited the railway site, she was greeted by a hoarding that already called it the Ram Mandir station. 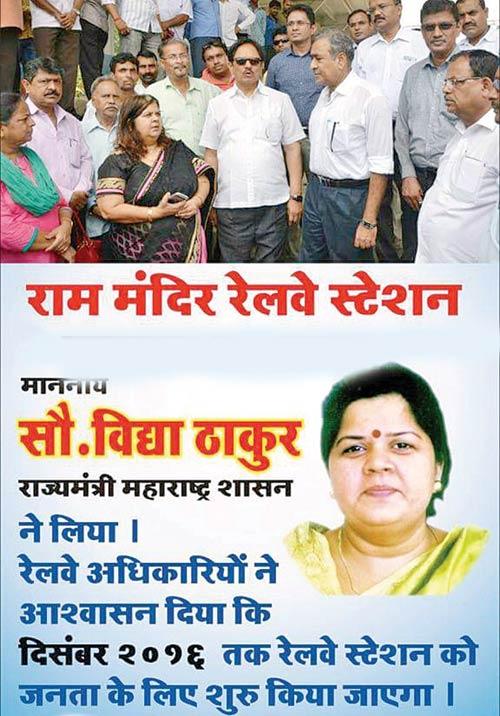 Two weeks ago, when Vidya Thakur, local MLA from Goregaon,  visited the site, she was greeted by a hoarding that already called it the Ram Mandir station

The demand for the name change was rather feeble till the inauguration on April 30 of the Mrinal Gore flyover, connecting Goregaon East to the west. Since then, the clamour has grown with both the BJP and the Shiv Sena wanting a slice of socialist Gore’s legacy. Sources say local party activists had wanted ‘Ram Mandir’ to be tagged along with Gore’s name. When that didn’t come through, they reportedly set their sights on the Oshiwara station.

‘Ram Mandir more popular’
Thakur and Kirtikar claim that the demand is not driven by religious sentiments. “The entire area where the station is being constructed is known as Ram Mandir. Why can’t we have the station named after Lord Ram? A famous temple of Lord Ram exists there. The state government has to take an initiative on renaming the station. We have informed the chief minister about it,” says Thakur, who has submitted a letter on the demand to Prabhu.

Kirtikar claims that he has spoken to Rajnath Singh, besides Prabhu, with regard to the issue.

“The land records of the place where the station is being constructed mention the Ram Mandir. Let me clarify; it’s not a religious matter. So, it should not be painted with that brush. The whole area is famous as Ram Mandir — from the bus depot to the road. Even local housing societies name their locality as Ram Mandir in their addresses. This name is more popular in the area than Oshiwara, and that’s why we have asked the state and the central governments to change the name.”

‘Not in our hands’
Ravindra Bhakar, chief public relations officer, Western Railway, says, “The railways cannot take a suo moto decision on the naming of a station. It’s the state government and the home ministry which have to decide this and issue a notification on the same, advising the railways for the name change.”

Next Story : P Chidambaram, his wife and family have assets worth Rs 95 crore