Mumbai: An Independence Day of colours, art and tiranga rallies

From freedom laughter to showcasing artistic skills at the airport, Mumbai celebrated the 76th Independence Day of India with vigour 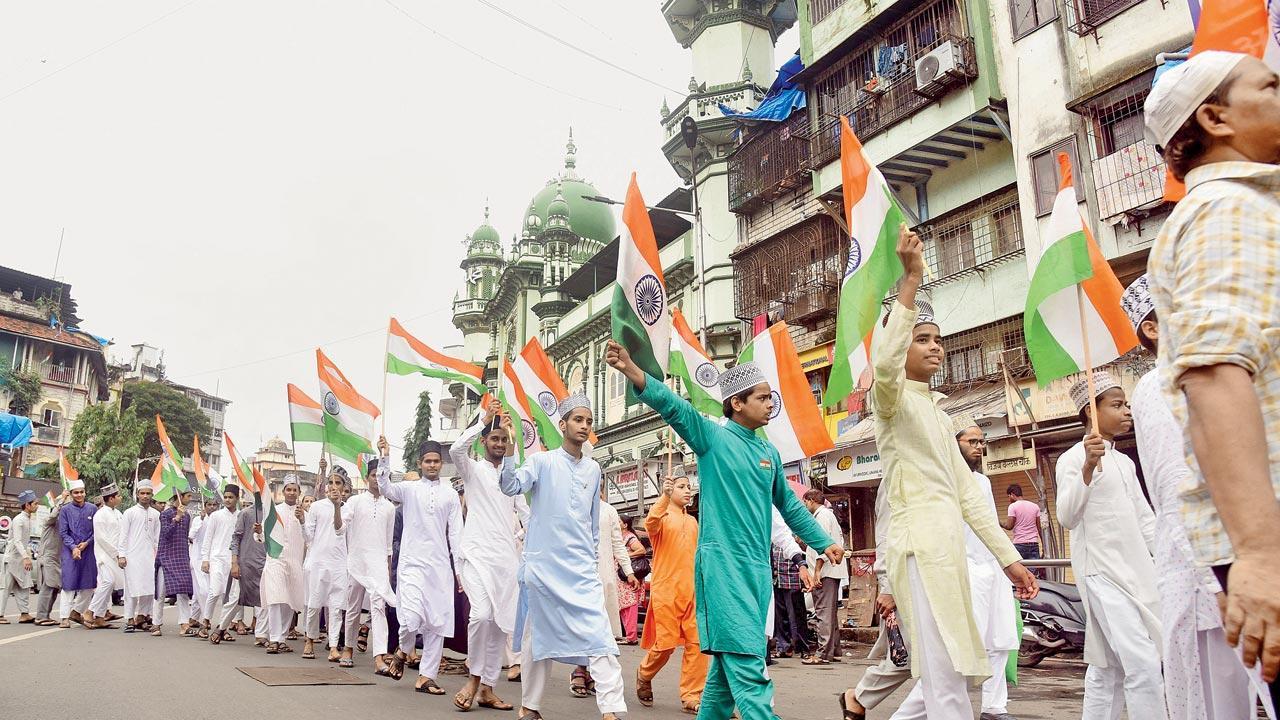 
From illumination to engaging in cultural and artistic activities, the city found its own ways to express their love for the country and gratitude for the freedom fighters on the 76th Independence Day.

Members of the Raza Academy, Mumbai, took to the streets to celebrate Independence Day. Nearly 200 participants participated in a Tiranga rally, singing ‘Sare Jahan Se Achha Hindustan Hamara’. The rally started from Minara Masjid junction at 12 pm and participants crossed Pydhonie, Bhendi Bazar and Md Ali Road and finally concluded at the start point, near Minara Masjid junction, around 1 pm. Muhammad Saeed Noori, founder and president of the Raza Academy, Mumbai, said, “We are Indians, so why would we wait for anybody to tell us how we celebrate the day?  Hence we decided to celebrate the 75 glorious years of our Independence by organising a get-together and taking out a rally. It was a wonderful feeling when people joined us at every
junction and saw the onlookers along the roads chanting slogans and singing along with us.”

The seats of CSMT-Jalna Janshatabdi Express’ AC Chair Car, on Central Railway, were transformed to represent the tricolour. Western Railway on August 14 observed the Partition Horrors Remembrance Day. “It has been envisaged to bring to light the agony, suffering and pain of millions of people who suffered the partition. Keeping in view the importance of the day, the exhibition has been curated by the Indian Council of Historical Research and Indira Gandhi National Centre for the Arts,” a WR spokesperson said. 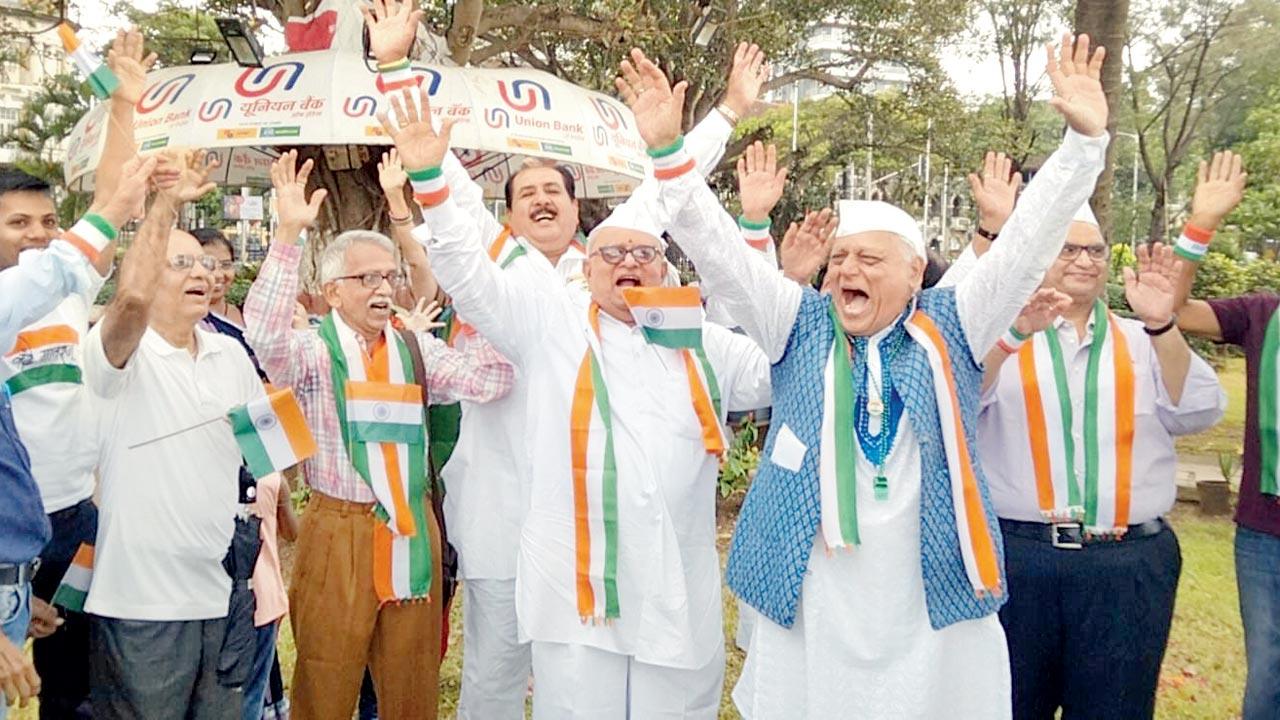 Members of a laughter club not only marked the day with a flag-hoisting ceremony and tricolour hues at the Nana Nani Park in Chowpatty, but also sang songs and indulged in themed laughter. Close to 150 participants gathered around 7.30 am, dressed in white and holding balloons in tricolour hues, and celebrated the I-Day. The members even felicitated all members aged 75 and above on the occasion of Independence Day. “We felicitated 25 participants who were born before August 15, 1947, to mark Independence Day, followed by a celebration with a different style of laughter. We called it freedom laughter,” said Kishore Kuvawala, president of Priyadarshini laughter club and organiser of the event. 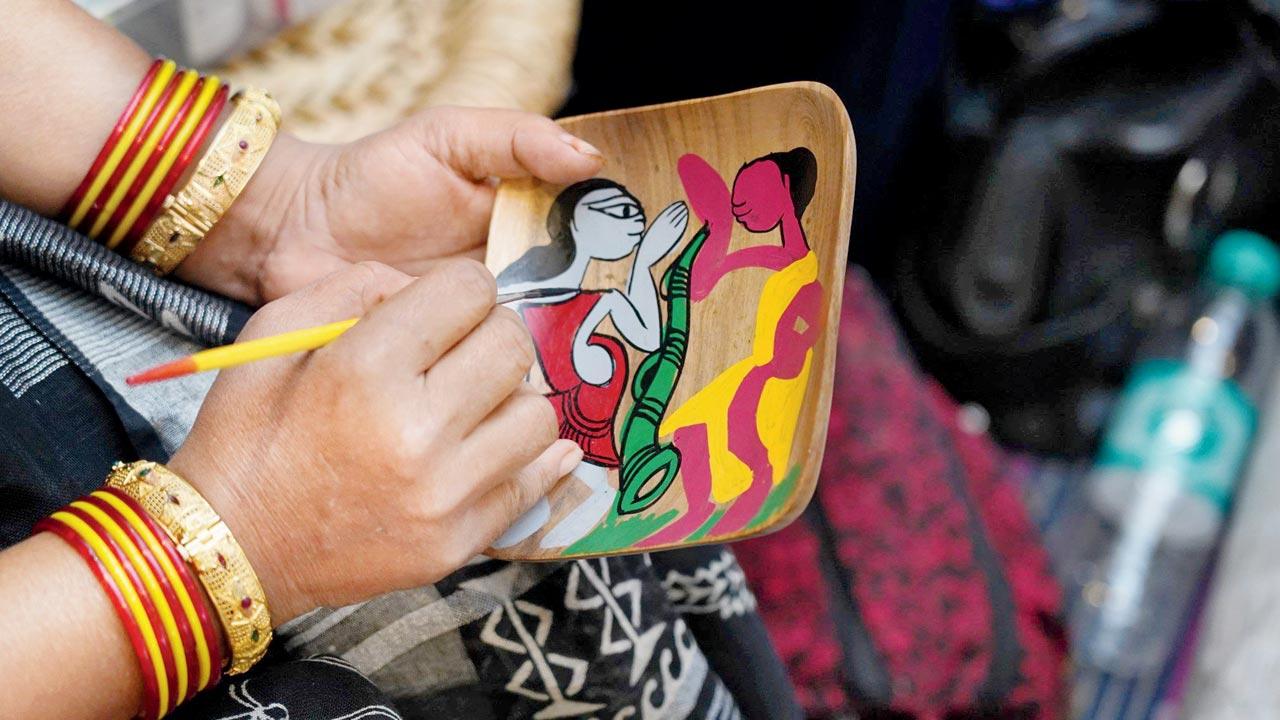 Besides seeing the Chhatrapati Shivaji Maharaj International Airport lit up in tricolour, passengers witnessed special art installations in the terminal and got to showcase their artistic skills. “The theme of the decor at the airport was ‘Growth to Goodness’. The airport also planned engaging activities and stalls for the passengers to commemorate the day. ‘Azadi ke rang’ is one such activity where artisans showcase the ancient ‘Patachitra’ art, celebrating India’s rich cultural history,” its spokesperson said. Passengers who participated in the event took home their paintings as a souvenir. 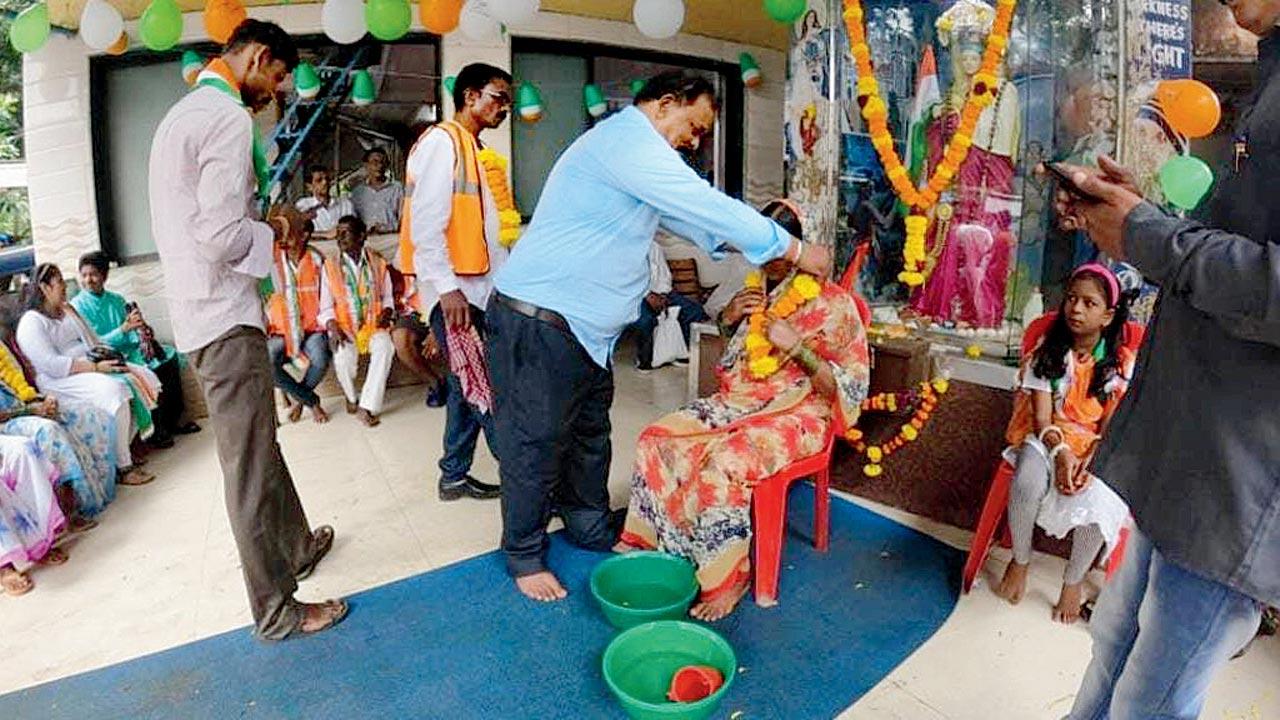 The BMC delivered more than 41 lakh flags within a week to citizens. Its heritage cell illuminated 243 buildings, including 48 state government buildings and 105 private ones, in tricolour. The BMC also illuminated 28 residential buildings, 100 trees, 60 light poles and 19 statues in Marine Lines. A tricolour illumination was seen at Middle Vaitarna dam. The Har Ghar Tiranga campaign received a good response in the western suburbs, too. Watchdog Foundation members celebrated I-Day at Our Lady of Vailankanni Grotto in Sahar village. “The members washed the feet of Dattak Vasti workers, labourers, painters, rickshaw drivers and domestic workers as a mark of respect for them,” said activist Godfrey Pimenta.

Society’s Man Friday does the honours 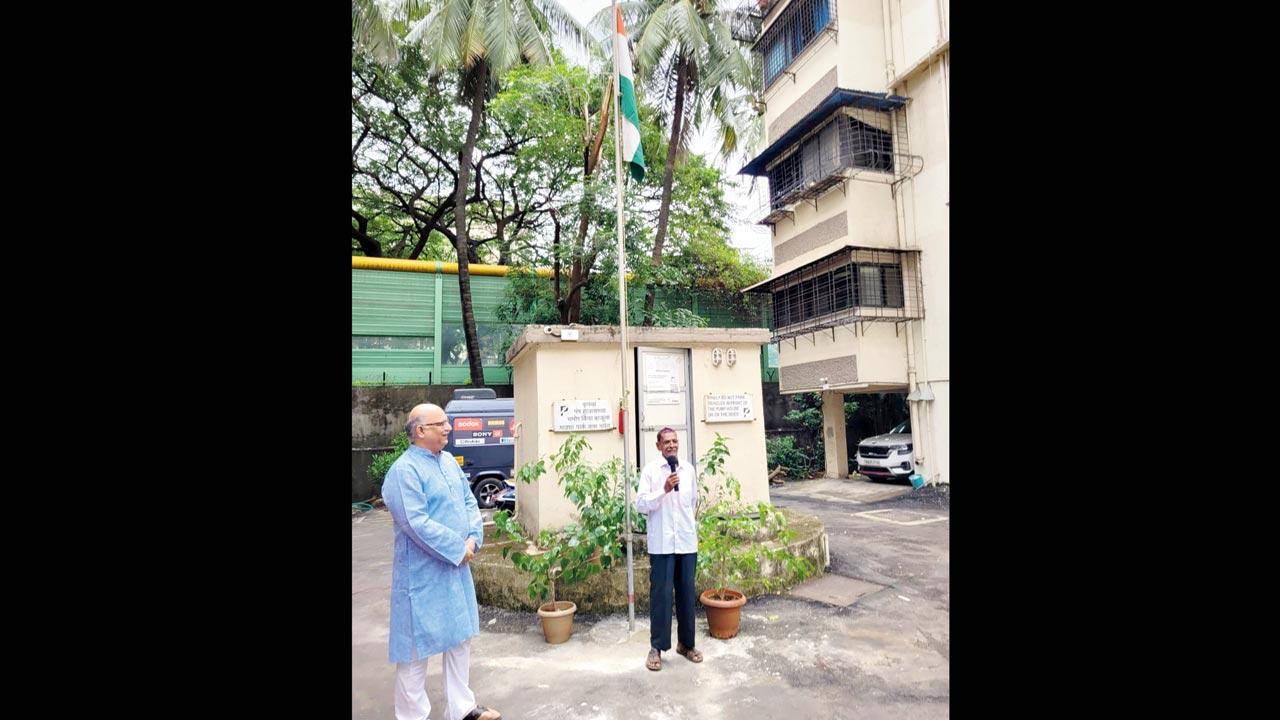 The colony of authors in Bandra East, Sahitya Sahawas, had a special guest for the flag hoisting. The flag was hoisted by Sahadev Kadam, an employee of nearly 40 years, who started out as a gardener and became a family member for everyone there. Sahadev mama, as he is called, even gave a speech. With him is society secretary (left) Dr Dattatraya Muzumdar. 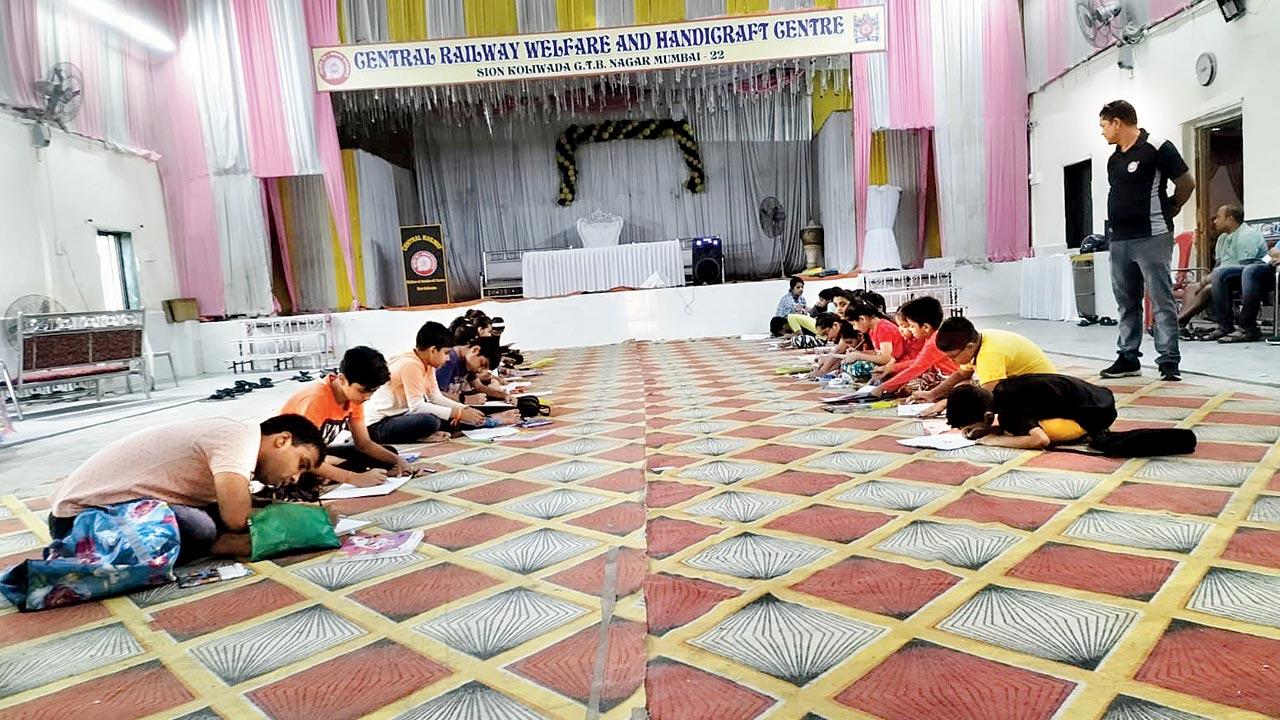 Children of railway employees participated in a drawing and essay marathon competition at Guru Tegh Bahadur Nagar railway colony. “The special event was organised on the occasion of the 76th Independence Day and children from the entire colony participated,” an organiser said.

In Dahisar, children led the I-Day celebrations. Around 400 houses at Shiv Shakti Complex felicitated COVID-19 warriors. Children and their parents were informed about the importance of freedom and were urged to contribute to the country’s development. Manish Barot, chairman of Shiv Shakti Complex, said, “After two years, we got the opportunity to celebrate. So women in our complex decided to take out a rally. We also felicitated three doctors as COVID-19 warriors.”

The Bombay Catholic Sabha of St Joseph Vikhroli celebrated an eco-friendly Independence Day. Mario Jose Rodrigues, spokesperson, said, “Around 500 eco-friendly flags, with seeds of marigold, basil, tomato and chilli inside were distributed by us. The flags can be disposed of in soil where seeds will grow. It is Sabhaites way of celebrating Independence Day on the feast of ‘our mother’ and caring for mother earth.” The Environment Forum of the Sabha proposed the idea of an eco-friendly flag. Colours used are also natural, Rodrigues said. 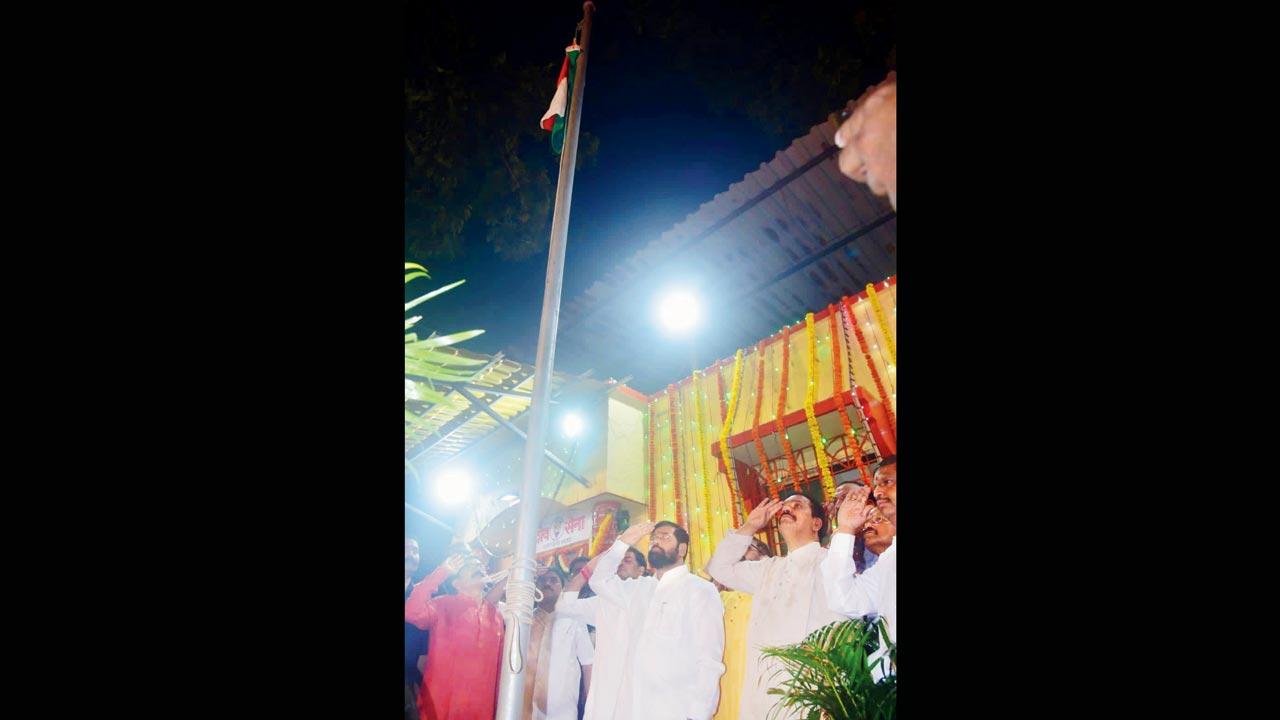 Every year, Independence Day is celebrated at a Shiv Sena shakha in Thane with the hoisting of the flag at midnight. Owing to tension following the split in the Shiv Sena, police had asked Sena MP Rajan Vichare and another party leader to not participate in the flag hoisting. “This is a tradition of Thane, which was started by the late Shiv Sena leader Anand Dighe. No one can stop us. I, along with our party leaders and colleagues, participated in flag hosting,” said Vichare. Chief Minister Eknath Shinde hoisted the flag amid heavy police security. “This is a tradition of Thane where everyone can participate in celebration. I instructed the police authority to not stop anyone from participating in national celebrations,” said Shinde. 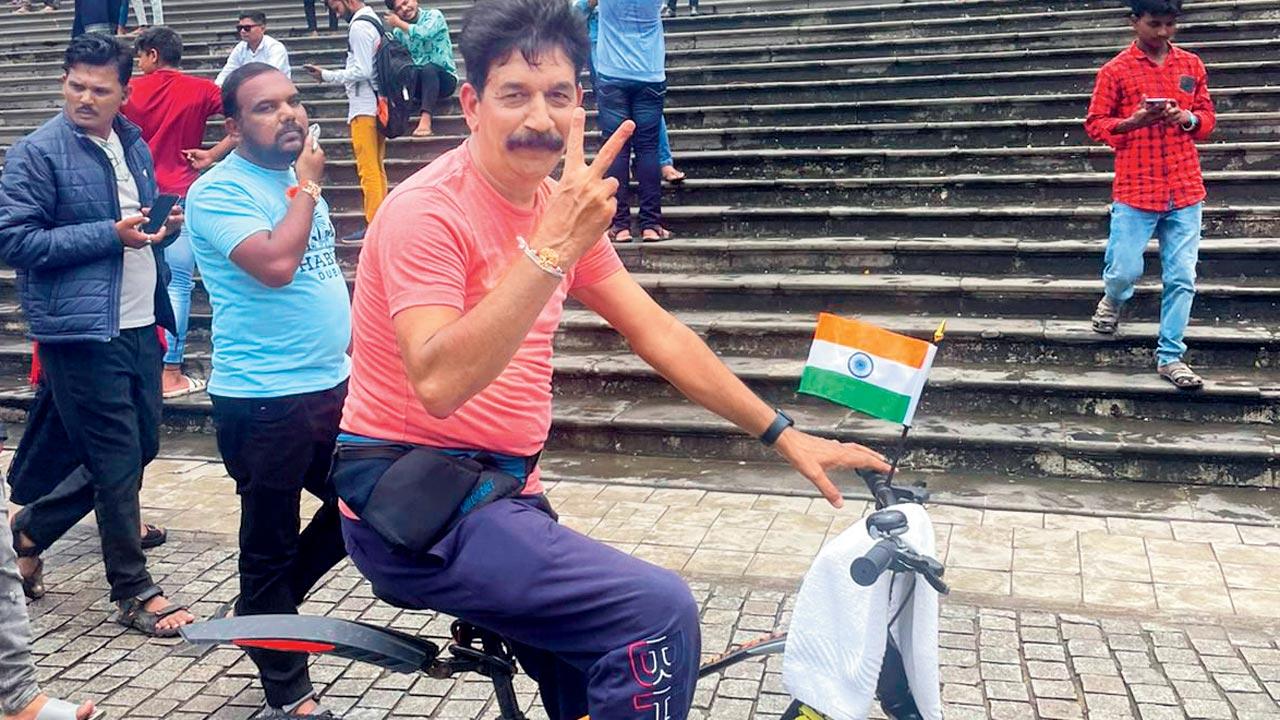 Nitin Upsani, chairman of Maharashtra State Board’s Mumbai division, cycled about 75 kilometres on Independence Day to raise awareness about rising pollution, promote cycling among youth, and urge students to participate in outdoor activities rather than be glued to gadgets. Upasani, 57, began at the state board’s Vashi office and cycled up to the Gateway of India before returning to the board’s office. “I started at 10 am from the state board’s office and got back at 4.30 pm. I went to the Gateway of India, and on the way back I went to Dadar before returning where I started. I am a regular cyclist and also do a lot of trekking. The idea was  to honour Independence Day and to promote cycling amongst youths. Kids who are busy with their mobile phones and TV can also take up cycling,” said Upasani.