Mumbai: Brace for a few more days of rain 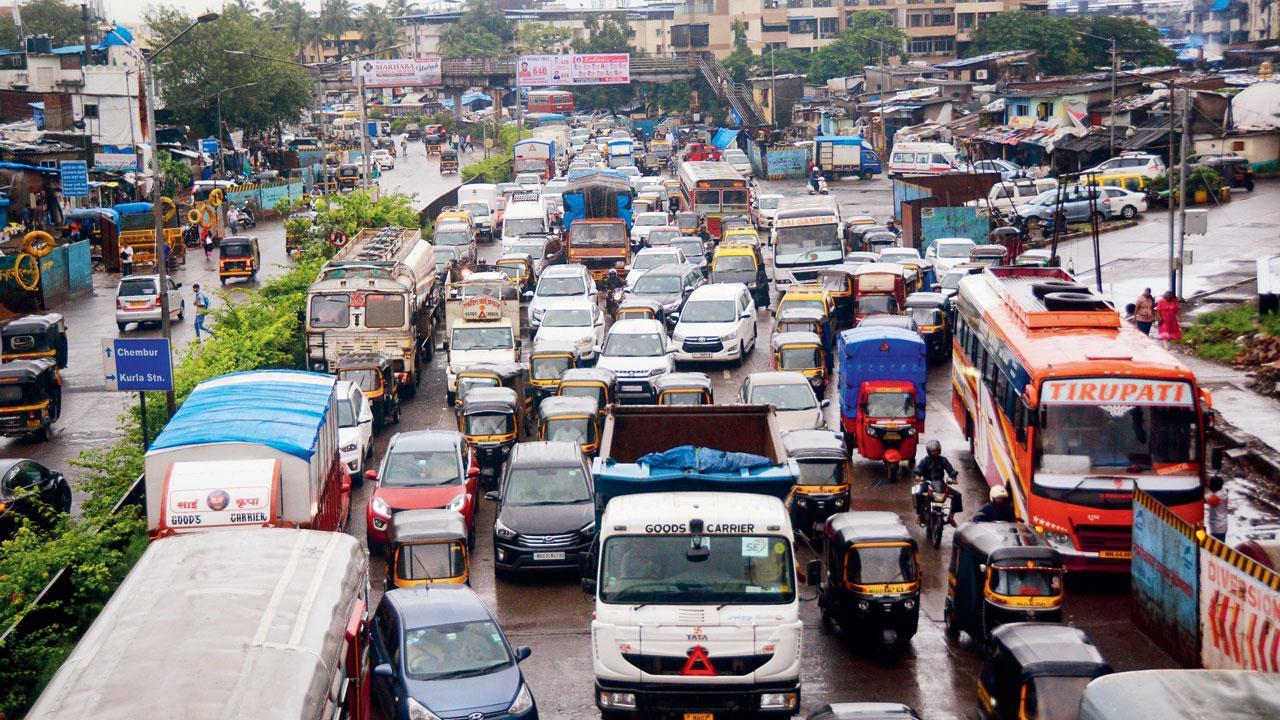 There were many traffic snarls in the city such as this jam on Santacruz-Chembur Link Road due to the heavy rain on Friday. Pic/Sayyed Sameer Abedi


Incessant rain on Friday left Mumbai and neighbouring Thane, Bhiwandi and Palghar  drenched and waterlogged. The India Meteorological Department and private meteorologists have predicted that the rainfall activity will continue over Mumbai for a few more days. The IMD has forecast moderate showers in Mumbai and suburbs in the next 48 hours, with heavy rain possible in isolated areas. As a result, the city will remain on yellow alert for the next two days.

The overnight rain in Mumbai caused waterlogging, leading to traffic disruptions in some parts. Local trains and BEST buses ran late, but neither of the services was cancelled. Heavy waterlogging was reported in the suburbs, especially at Mulund, Nahur, Powai, Andheri, Santacruz, Khar and Goregaon. As per the data shared by the BMC's disaster management unit, the city witnessed 11 tree and branch fall incidents. Besides this, two incidents of house/wall collapse and four incidents of short-circuits were recorded in the past 24 hours.

“Many areas in the Konkan belt witnessed heavy and good rainfall  through Thursday night and Friday. A well-marked low-pressure area has been formed over the central parts of Uttar Pradesh apart from this a trough has been formed over the Arabian sea. It extends from the Northeast Arabian Sea to Northeast Bihar across South Gujarat, West Madhya Pradesh, and upto Uttar Pradesh. At the same time, the weather system is experiencing strong westerlies. Owing to this the coastal belt of Konkan and other regions under Madhya Maharashtra are witnessing continuous heavy rain. Heavy rainfall is expected on Saturday in some isolated areas, however, the intensity is likely to reduce on Saturday,” said Sushma Nair,  a scientist at IMD Mumbai.

“Cloudy skies and intermittent showers with breaks in between will be a regular pattern for Mumbai in the coming few days,” said a meteorologist from Skymet weather, a private weather forecasting agency. Thane, Pune, Raigad, Ratnagiri, Kolhapur, Nashik, Palghar, and Satara will also be on orange or yellow alert for the next few days due to severe to extremely heavy rain forecast.

The situation in MMR was worse than in the city on Friday. Thane, Navi Mumbai, Dombivli, and Kalyan city witnessed waterlogging. Shaunak Chandorkar, a resident of Thane, said, "There was waterlogging in the station area. So the auto-rickshaw driver took another route." "Waterlogging started at Nandivali where I stay, after 11 in the morning and it started receding post afternoon," said Pranay Kotwal, a Dombivli resident. “Since all the roads are potholes-ridden it is difficult to walk. The trains were also running 15 to 20 minutes late, which was the biggest inconvenience,” said Amresh Pandit from Dombivli East.