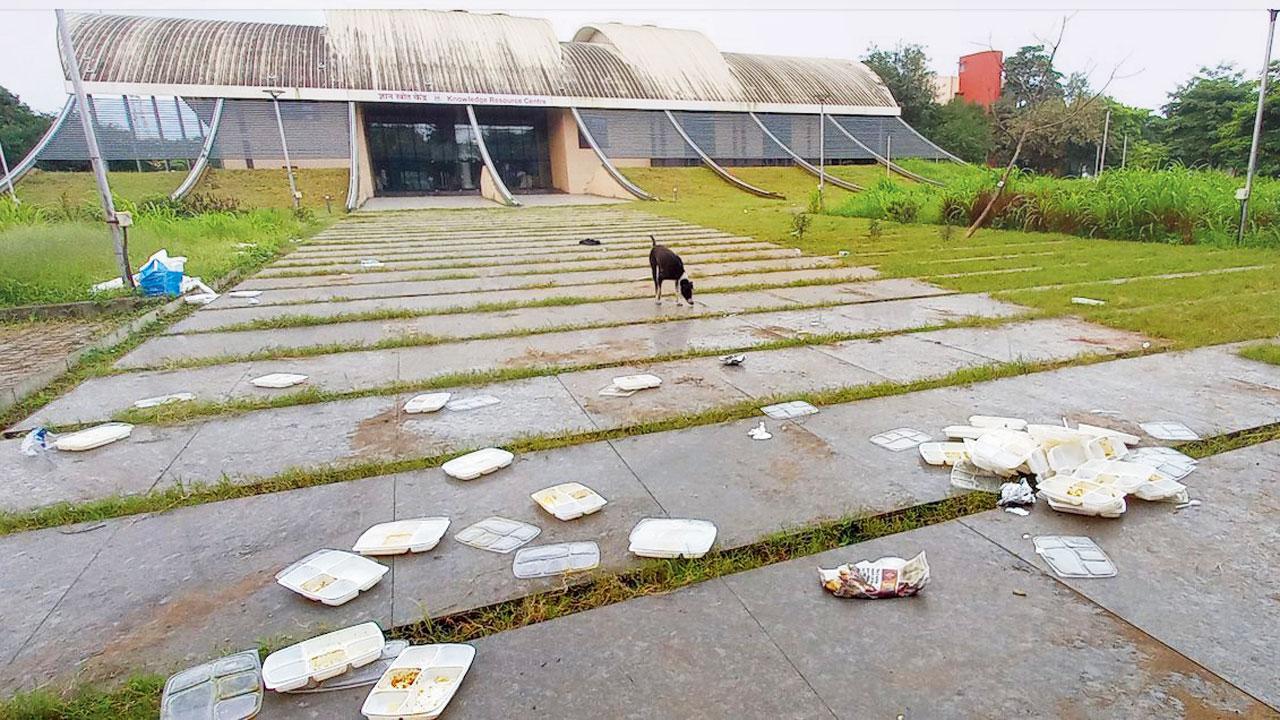 
A day after Chief Minister Eknath Shinde’s Dussehra rally at BKC, student bodies and youth wings of political parties including the Yuva Sena, affiliated to the Uddhav Thackeray faction of the Shiv Sena, protested the “mess” created on the Mumbai University’s Kalina campus that provided parking facility for the event.

The protesters shared photos and videos of liquor and water bottles strewn around, scattered plates, and leftover food apart from heaps of garbage dumped after the rally on Wednesday. A student, who did not wish to be named, said the scene was particularly bad outside the newly constructed knowledge resource centre. “Before the varsity conservancy staff or BMC garbage vehicles reached in the morning, the campus was quite a sight. I really wished the vice-chancellor, pro-vice-chancellor and even the CM himself had seen it,” said the student. 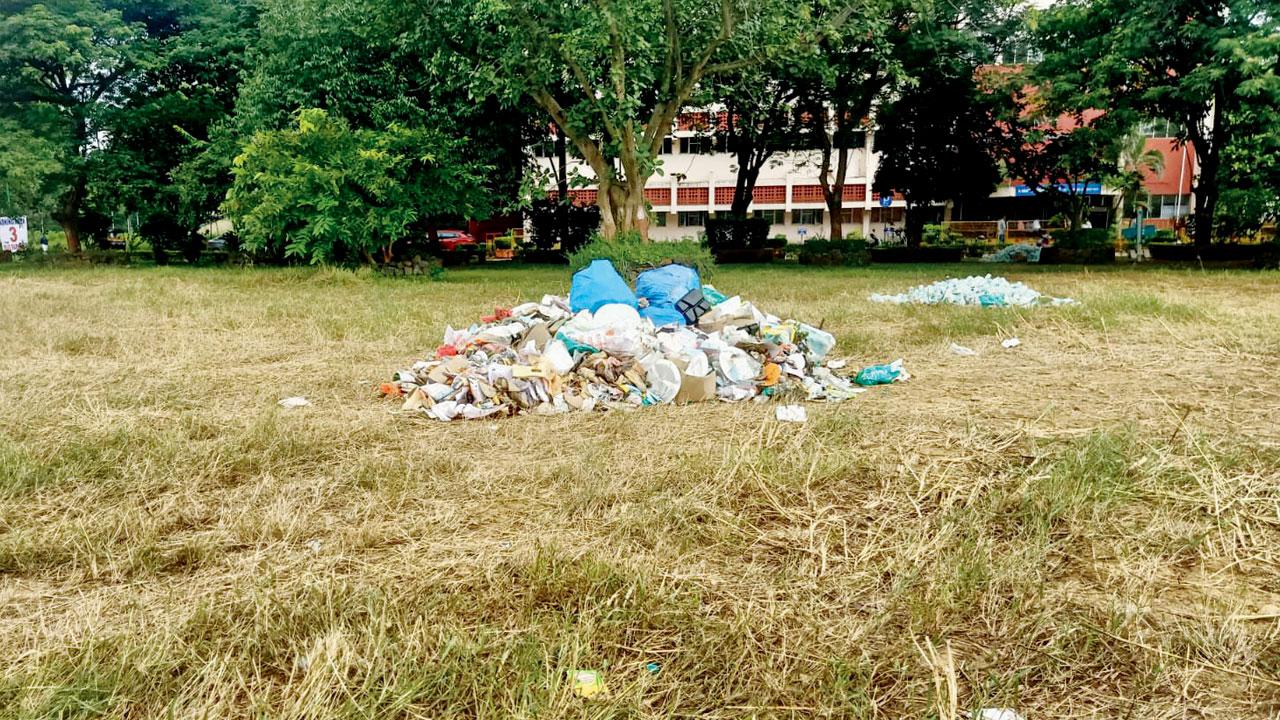 A pile of trash on the varsity campus

He said plates were strewn outside the knowledge resource centre, with stray dogs feasting on the leftover food. “There was a strong urine odour at several places. Few of my classmates complained about it. This is a university campus, but it looked like a ground or lawn rented for wedding functions a day after.” Last week, Yuva Sena leaders and a few student organisations objected to the varsity’s decision to allow the vehicles arriving for the CM’s rally to be parked at the Kalina campus. They had warned the university administration about the potential mess and misuse of the university space.

Also Read: Introspect why so many leaders have quit party: Eknath Shinde to Uddhav Thackeray

Even liquor bottles were lying around along with other trash, said Yuva Sena workers who have sought action against the organisers. “Several plots on the Kalina campus, including the helipad, were used to park vehicles arriving for the CM’s Dussehra rally on Wednesday. This has left a huge mess on the campus, with booze bottles everywhere and the stink of leftover food hanging in the air… Will the governor, who also serves as the state’s chancellor, and education minister take action against such irresponsible behaviour,” asked Yuva Sena’s Pradeep Sawant, a member of MU’s Senate. 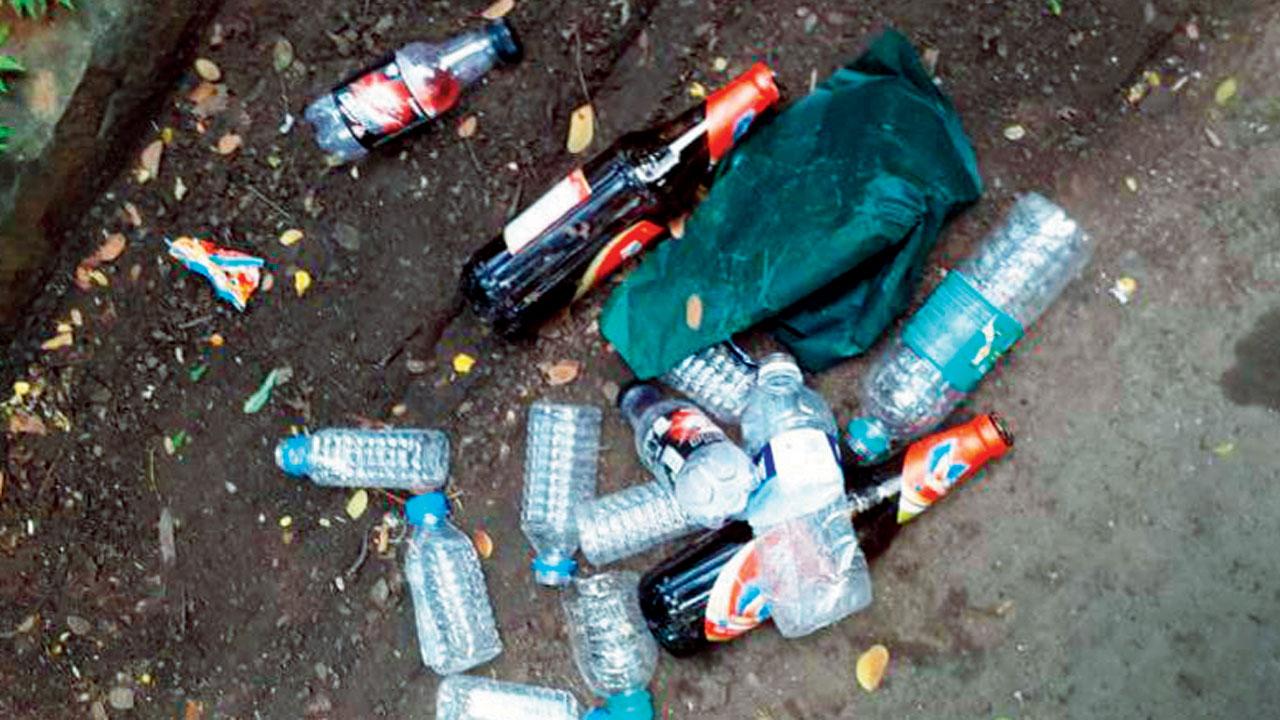 Advocate Amol Matele, an NCP spokesperson, and leaders of the Nationalist Student Congress said: “A political rally of the CM Eknath Shinde camp was held at the Bandra Kurla Complex. The arrangement of the vehicles coming to this gathering is a tradition of making money on the occasion of Dussehra by arranging parking at the University of Mumbai. Sadly, arrangements were also made for alcohol consumption on the Mumbai University campus for the visitors.”

Former MU student Ashish Dwivedi, who is also an activist from Chatra Yuva Sangharsh Samiti, said, “We will not let this subject go until the university administration issues a clarification or admits that this was their mistake and that they would never give out space on the campus for political events again. We will organise a student protest against the decision of the university administration. If nothing is done, this will happen every year.” A Mumbai University official told mid-day, “All the mess and garbage strewn in the area where parking was allowed has been cleaned and cleared from the campus. If there are any damages during this time, the same will be repaired by the BMC.”

Uddhav Thackeray’s Dussehra rally at Shivaji Park and the one held by Chief Minister Eknath Shinde at BKC on Wednesday were too loud, anti-noise pollution activist Sumaira Abdulali has said, demanding police action against the two groups. 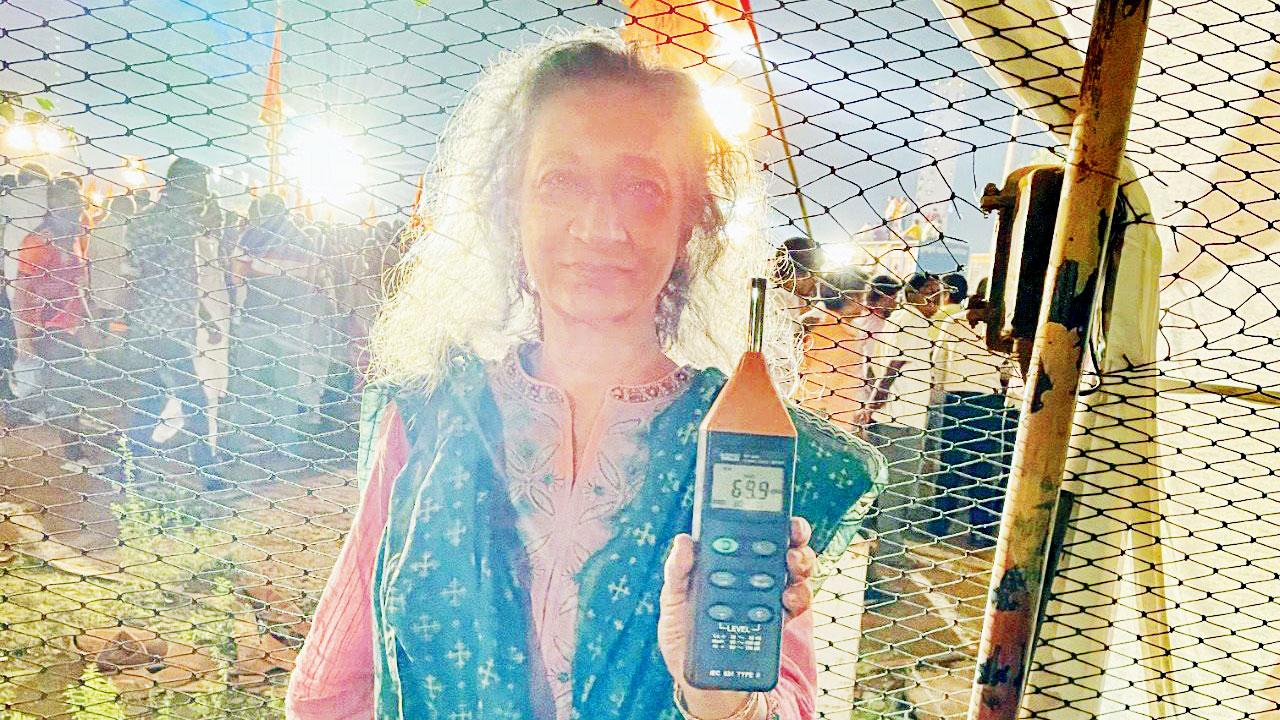 “The highest decibel level was from the drums on the road outside the park, next to a school and nursing home. The loudest speech was by former Mumbai Mayor Kishori Pednekar and was recorded at a maximum of 97 dB...The event continued for 3 hours, 2 hours longer than the 2019 Dussehra Rally at Shivaji Park.”

Abdulali said Shivaji Park is a residential pocket and was declared a Silence Zone by a Bombay High Court order. “After the Noise Rules were amended in 2017, the state government has not re-notified it as a Silence Zone. I have already written to Mumbai police on Twitter and will soon send a complaint letter to book the organisers of both events for violating noise pollution rules.”

Next Story : Mumbai: Pervert nabbed after 100 days of investigation