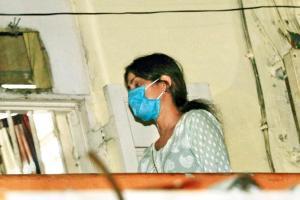 
As part of its ongoing investigation in the alleged suicide case of actor Sushant Singh Rajput, the Bandra police have sent a letter to Yash Raj Films seeking details of the contract he signed with the production house. According to sources, the move comes after cops found some links that might help them investigate the professional rivalry angle.

The cops so far have recorded the statements of 13 people in connection with the actor's death. On Monday, the statement of his friend Rhea Chakraborty was also recorded, which continued for 11 hours. According to sources, she was asked about the actor's work life and whether he was facing any financial constraints. "Her statement is going to be very crucial in the case to ascertain the reason behind his depression. The actress used to take him to the psychiatrist. He had stopped taking his medicines when he started to feel better a couple of months back," an officer said.

"We are trying to verify some information we have collected as part of the investigation. However, we haven't found anything related to professional rivalry yet," the officer added. The cops might also ask for similar details from other production houses with which he worked in the past or had signed contracts for upcoming movies.

Meanwhile, the cops also recorded the statements of the actor's business manager Shruti Modi and his PR manager Radhika Nihalani. Shruti was with the actor from July 2019 to February 2020 and was part of the Chhichhore film promotions.

The Bandra police might also call director Shekhar Kapoor to record his statement.