The arrested accused identified as Rajnish Singh, 30, was running a call centre at Marathon icon Tower in Lower Parel; cops found out that the accused also provided sex services at a place which was run in the name of a spa 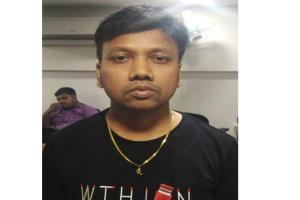 
The Mumbai crime branch's unit - IX have arrested a businessman for running a call centre which provides business to sex workers. Akbar Pathan, DCP detection, said, "We were working on this case for more than a month and finally managed to lay a trap at Peninsula Grand hotel in Sakinaka and rescue three females."

The arrested accused identified as Rajnish Singh, 30, was running a call centre at Marathon icon Tower in Lower Parel. According to an officer, a few months ago via a newspaper advertisement, the cops noticed that he was offering spa services at home. However, there was no address mentioned, only a mobile phone number.

The Crime branch then began working on the case, but despite calls being made by the number on the newspaper, the team could not locate it.

The crime branch then set up a fake customer who contacted the person on the number to find out information about the spa services offered.

During an enquiry, they found out that the accused also provided sex services at a place which was run in the name of a spa. The fake customer then asked for 4 women to be dropped off at Peninsula Grand hotel in Sakinaka, Andheri East.

The crime branch team under the supervision of senior inspector Mahesh Desai, Inspector Asha Korke and other staff waited for the women to arrive. As soon as that happened the fake customer signalled the crime branch officials, who then conducted a raid in the room.

Korke said,"After the raid at the call centre, we found four mobile phones and four female operators, who would divert phone calls to the women. Six women, who were working for this call centre, would travel to the respective customer's location as per their request."

There was a fixed price chart depending on the service requested for. The prices ranged from Rs 2,500 to Rs 10,000.

The accused Singh was already booked by the crime branch back in 2017 for running a spa centre. Post that, he used this as a cover in order to avoid suspicion from anyone.

Services were provided between 9 am to 9 pm. The call centre would be shut at night. The six women who were appointed as spa therapists were on the payroll and would earn Rs 8,000-10,000 as salary per month.

An officer said, "Singh would earn at least Rs 1 lakh from one girl in a single month. He would also give them 50 per cent of their daily earnings."

Next Story : Mumbai Crime: Two caught with drugs worth Rs 9 lakh in Wadala