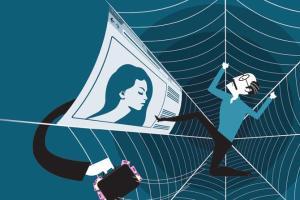 The lure of dating a young woman proved too tempting for a 65-year-old Malad resident, who lost Rs 46 lakh to a website that claimed to get him in touch with one. The victim, who is married, tried to get his money back when he realised he was cheated, but failed to get a response from the website. He then complained to the Kurar police, who booked unknown persons for the offence, and are trying to track the culprits.

The man had approached the police in January 2019, and after investigations, they finally registered an FIR on March 29. The victim chanced upon the website, www.locanto.net, a free classifieds site, where people and businesses offer various services (such sites usually are not responsible for the content put up on them), in May 2018. "When I checked the website, I saw a tab, ‘looking for.’ I then clicked on 'entertainment'. I was asked to register on the site. When I completed the registration, I received a call from a woman named Meera," he said in his statement to the police. "Meera shared pictures of three girls and told me to pick one. When I did so, she told me I would have to pay Rs 25,500 to meet the girl, after which I could date her for a year. Then for other reasons such as to make a confidential agreement, a video call insurance and so on, they took around Rs 46 lakh from me. After paying all the money, the girl, Rosy, I had spoken to twice stopped calling me," he added in his complaint.

The victim came across the website, a free classifieds site, where many people and businesses offer various services, and clicked on a link. Representation pic

Police said the victim was also asked to pay Rs 82,500 as privacy fee — to ensure his number would not be shared. For video call insurance he was told to pay Rs 1.75 lakh. He was also asked to pay Rs 2.85 lakh to make a contract with the girl for a year. Then Rs 5.50 lakh was taken for profile verification. On May 7, he again received a call from Meera saying he had to pay Rs 26.50 lakh for premium membership, and Rs 50,000 as extra charges. After paying around Rs 38.17 lakh, the victim was given the contact number of a girl called Rosy. The police said he spoke to Rosy a couple of times. Meera then called him again, asking if he was 'happy with Rosy', and if he was, he would have to pay Rs 7.85 lakh as 'holding charges,' so that her profile would not be shared with other customers. But, after paying the money, he didn’t get any response.

While browsing another section of the website, he found that many people had written negative comments about the link that he had registered on. Worried, he started calling Meera and Rosy’s numbers to get his money back, they kept assuring him that he would. Till January 2019, the man thought he would get his money back if he kept insisting. They promised to refund all his money on January 10. When he didn’t get the refund and they stopped responding to him, he filed an application with the Kurar police station in February. An offence was registered on March 29, 2019.

He also tried sending SMS and WhatsApp messages, seeking his money back, but no one replied. He finally approached the police. "We have filed a complaint against unknown persons under IPC sections 419 (cheating by personation), 420 (cheating) and relevant sections of the Information and Technology Act, 2000. We are trying to track the culprits through the numbers provided and the bank accounts where the money was deposited,” a police officer said. "We have filed a case against an unknown person for cheating the victim of Rs 46.03 lakh. We are investigating the money trail and call details. We urge people not to get fooled by such sites," said Udaykumar Rajeshirke, senior inspector, Kurar police station.

Next Story : Election 2019: Kids roped-in to convince parents to vote in LS polls